CULTURE
What Is “Banana Split” Weed and Will This Strain Satisfy a Toker's Sweet Tooth?
AD
If a cannabis chemovar is going to be named “Banana Split,” it better smell as sweet as the cold, creamy dish it takes after. And, rest assured, this strain delivers.
Published on June 8, 2020

Ice cream and cannabis go hand-in-hand. One triggers the munchies, while a bowl of the other can satisfy even the most ravenous hunger pangs brought on by a bowl of dank.

Banana Split smokes good enough to do both. Its deep green buds give off a candied aroma, and the strain’s high can either lead to the couch or to a night of inspirational insights — or both, depending on the smoker’s set, setting, and individual response. Let’s explore what makes Banana Split such a sweet treat to smoke on. 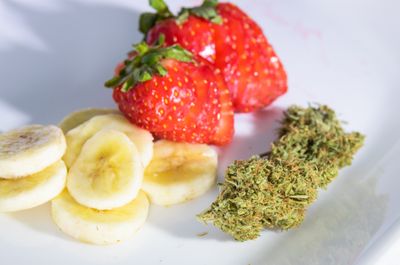 Banana Split Comes From a Long Line of Reefer Royalty

Developed by Crockett Family Farms — which is now owned by the Dutch cannabis cultivation giant DNA Genetics — Banana Split is a cross between the award-winning Tangie and Banana Sherbert. One of Banana Sherbert’s parents boasts a genetic lineage that includes another saccharine strain to boot, too: GSC, formerly known as Girl Scout Cookies. Tangie, on the other hand, is a version of Tangerine Dream, a citrusy strain that became a hit (and got plenty hit) in the ‘90s.

Why Stoners Seek Out Brain Freezes From Banana Split

Banana Split may be one of the newer blockbuster strains to hit the legal weed markets, but it will likely remain a mainstay on pot shop menus for years to come. According to Leafly’s lab data, it’s one of the few weed strains known that produces substantial amounts of terpinolene, also known as δ-terpinene. In terms of aroma, terpinolene is kind of a super-terp, since it doesn’t exude just one or two kinds of scents, but rather captures an entire range of smells found in cannabis: from pine to citrus peels to flower petals. For sensitive schnozzes, it even releases hints of moist soil and hops.

The other two major terpenes found in Banana Split buds are myrcene and limonene, which explains why it smells like freshly sliced banana endocarp seeped in melted vanilla bean ice cream. Lab data suggests it usually cranks out about 14 to 21 percent THC, which, depending on how well it’s cultivated, cured, and packaged, places it in the “average” to “above average” categories in terms of the punch it can pack. 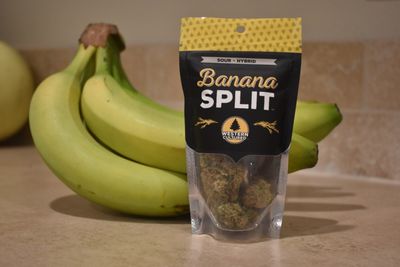 As for heady effects, the verdict on whether Banana Split typically causes an “up” or “down” high are, well, split. Most reviews online note that this strain induces relaxation, but also brings enough energy to carry on simple tasks like a good conversation.

Some folks report that this strain makes them sleepy, which could be due to the terpinolene produced by the plant. One 2013 study found that inhaling terpinolene vapors can facilitate sleep, though that study only looked at mice and not humans.

Yet others report that Banana Split gets them focused, and it does more to help them stay awake than it does to knock them out. Just like with other cannabis strains, different people will react to Banana Split differently.

So, we guess the only way to find out which side of the Banana Split divide you’ll fall on is to get your hands on some, load it up, and spark away. Enjoy!

STRAINS
FLOWER STRAINS
INFORMATIVE
SEO
MORE...
MERRY JANE Staff
FOLLOW
MERRY JANE is based in Los Angeles, California and is dedicated to elevating the discussion around cannabis culture.
Share this article with your friends!
AD
By using our site you agree to our use of cookies to deliver a better experience.
Accept
Decline
MORE FROM MERRY JANE