CULTURE
What Is “Gelato” Weed and Why Do Rappers Love the Strain So Much?
AD
In the past couple years, rappers have name-dropped Sherbinskis’ Gelato more than any other marijuana strain. How did this bud replace Cristal as hip-hop’s favorite party favor, and what makes the flower so hype?
Published on April 24, 2020

Dedicated weed smokers and cannasseurs alike have puffed on Gelato at least once. And if they haven’t, some variety of the world-famous Gelato strain is likely on their bucket list.

Gelato got its start in the Bay Area, bred and popularized by Mario Guzman, otherwise known as the mastermind marijuana geneticist Mr. Sherbinski. Sherbinski belonged to a crew of San Francisco-based breeders such as Jigga, Berner, and others who all once criss-crossed the genetics of the famed Cookies strains together. They’ve since gone on to form their own companies and propriety plants. 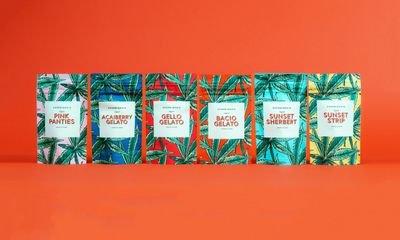 The original Gelato is the cheeba child of two legendary dank dynamos: Cookie Fam’s Thin Mint Girl Scout Cookies (aka GSC) and Sherbinskis’ Sunset Sherbert. Sherbinskis has since developed a variety of Gelato phenotypes, some that simply have numbers designating their distinction from the OG.

Other Gelato phenos simply bear delectable monikers like “Acai Berry Gelato” and “Mochi Gelato.” Not all of these variants on Gelato descended directly from the first mother: Some are crosses of other Gelato varieties, others back-crossed with entirely different strains. Regardless, the Gelato name is now synonymous with delightfully saccharine flower that produces creamy smoke. Yum.

But, back to Gelato proper. When grown under optimal conditions, Gelato produces fat buds bearing purple and violet hues, glistening with such dense coverings of terpene-packed trichomes they look like they were rolled around in pure sugar. Its visual appeal explains why certain, unusually colorful strains claim Gelato in their lineage. Taste the rainbow.

Any weed strain’s effects will vary depending on how it was grown, how it was packaged and stored, and who’s smoking it. But self-reports online usually state the same thing: Gelato is strong shit, but tokers can still think clearly while lit on it. For many cannabis consumers, Gelato strikes the perfect balance between being hazy-headed and focused.

According to compiled lab reports at Leafly, Gelato isn’t a strain that consistently pumps out massive amounts of THC. On average, the strain comes in around 17 percent THC, which is decent, but not on the level of some strains that can reach as high as 30 percent. Of course, THC isn’t the be-all end-all of cannabis potency. Gelato likely gets folks lifted sky-high due to its rich terpene profile, which is only possible with genetics that produce moderate THC levels.

And in case you’re wondering, the three most prominent terpenes found in Gelato are caryophyllene, limonene, and humulene, in descending order. Why Do Rappers Mention Gelato Non-Stop?

Sherbinskis’ strains have received over 200 shout-outs from hip-hop artists and other musicians over the years. But of all of them, Gelato probably takes the cake when it comes to name-drops.

Who has mentioned Gelato? Young Dolph (on a track aptly titled “Gelato”), Peewee Longway (with Young Dolph on yet another track titled “Gelato”), Future (more than once, too), Hoodrich Pablo Juan, Lil Yachty, Lil Uzi Vert, Lil Pump, Offset of Migos, and Berner (of course), are a few rappers that felt so inspired by Gelato they immortalized the strain in their verses.

And it’s not just the rappers either. Pop-rock guitar maestro John Mayer said he puffed on the sticky-sweet Gelato for inspiration while writing music, too. Even the illustrious New York Times devoted an entire feature to Mr. Sherbinski and his beloved strain.

But why do musicians love this weed so damn much? Sherbinskis produces and markets luxury cannabis, so there’s certainly a draw there. Though, really, artists of all stripes can’t afford to be bombed-out on couch-lock weed all day. These are creators we’re talking about. They need to be stoned enough to jolt their minds out of the humdrum patterns of everyday thinking. But they also need energy to translate their insights into something tangible, like musical notes, a clever verse, or a killer riff. Gelato does both.

So, if you happen to come across some genuine Gelato, get it, roll that shit up in the special papers you saved for special occasions, and join a legion of MCs who’ve all gotten elevated on this dank delicacy.

STRAINS
HISTORY
HIP-HOP
FLOWER
MORE...
Randy Robinson
FOLLOW
Based in Denver, Randy studied cannabinoid science while getting a degree in molecular biology at the University of Colorado. When not writing about cannabis, science, politics, or LGBT issues, they can be found exploring nature somewhere in the Rocky Mountains. Catch Randy on Twitter and Instagram @randieseljay
Share this article with your friends!
AD
MORE FROM MERRY JANE