CULTURE
What Is “Wedding Cake” Weed and What Makes This Strain So Sweet?
AD
Wedding Cake is one of the new comers to the cannabis scene, and the strain is in high demand due to its energetic effects and distinctly saccharine flavors.
Published on April 22, 2020

With weed weddings becoming the new standard for stoners getting hitched, it’s no wonder that the strain dubbed “Wedding Cake” is a popular offering at marijuana-themed matrimonial ceremonies. Described as a chill-yet-functional flower variety, it’s the perfect cannabis complement to all the readily available champagne and desserts reserved for the special day.

Or maybe you just like getting blazed on some potent shit that kinda tastes like candy. There are many reasons to dig Wedding Cake, so let’s dive into what makes the strain so hype.

Pot strains bearing names inspired by various fruits, candies, and other sweets are a dime-sack a dozen these days. But Wedding Cake cuts above the rest due to its distinctly spicy and vanilla-filled flavor and aroma.

How does Wedding Cake get its namesake qualities? Like every other cannabis strain, this one gets its mouth-watering bouquet from its terpene contents. According to compiled lab data, the three most prominent terpenes in Wedding Cake are limonene (citrus), caryophyllene (pepper/spice), and myrcene (earthy/dirt).

But if you peep the various self-reports from folks who’ve smoked Wedding Cake, the descriptor “vanilla” pops up quite often. What compound in cannabis could be contributing to that sweet herbal delight?

The molecule in vanilla extracts that make them smell and taste like, well, vanilla, is called vanillin. As far as we know, weed doesn’t produce vanillin. So, it’s possible that some specific blend of common cannabis terpenes — like limonene, caryophyllene, myrcene, and possibly some other natural components — blend to give off that vanilla scent. 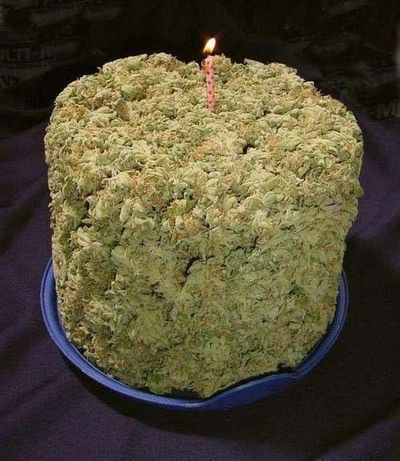 According to the weed breeders at Seed Junky, the company that says it created Wedding Cake (aka Triangle Mints #23 or Pink Cookies), the strain is a cross between a particular cut of Triangle Kush and Animal Mints. Animal Mints claims Thin Mint Girl Scout Cookies (GSC) as one of its parents.

And GSC was one of the first famous strains known for exuding hints of vanilla. So, GSC’s genetics likely explains why Wedding Cake tastes lightly of vanilla frosting, but that’s still not scientific evidence. But hey: We don’t gotta know everything about weed, right? The vanilla mystery might even be part of Wedding Cake’s sweet allure. Now enjoy the flower strain — your sweet tooth will thank you!

STRAINS
EDUCATION
CANNABINOIDS
FLOWER
MORE...
Randy Robinson
FOLLOW
Based in Denver, Randy studied cannabinoid science while getting a degree in molecular biology at the University of Colorado. When not writing about cannabis, science, politics, or LGBT issues, they can be found exploring nature somewhere in the Rocky Mountains. Catch Randy on Twitter and Instagram @randieseljay
Share this article with your friends!
AD
By using our site you agree to our use of cookies to deliver a better experience.
Accept
Decline
MORE FROM MERRY JANE