CULTURE
What Is Limonene and What Does This Cannabis Terpene Do?
AD
Limonene is the part of cannabis that gives some fruity strains their citrusy or lemony qualities. It does a lot more than simply provide some zest to your buds, though.
Published on July 31, 2019

If you ever smelled weed that reminded you of freshly peeled oranges, you were probably smelling limonene.

Limonene is one of over 100 terpenes produced by cannabis. Terpenes are aromatic compounds that gives weed its characteristic scents and flavors. Terpenes also confer some protection to the plants from the environment, pests, and herbivores; they can confer some health benefits to humans, too. 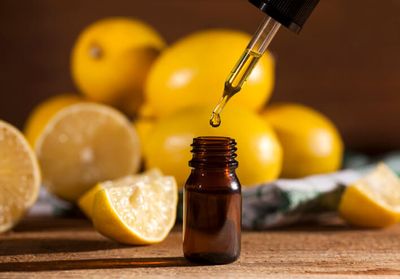 Limonene possesses several medicinal qualities that could enhance cannabis’s ability to heal people. Studies show that the terpene can repair skin damage, fight cancer, reduce anxiety and depression, promote weight loss, combat pain, and reduce digestive inflammation and heartburn. But be careful with getting too much limonene, such as from essential oils or vape cartridges, as it can act as a mild irritant — triggering sneezing, sore throats, or burning skin — if high amounts are consumed.

Unlike other terpenes such as linalool, which have primarily been studied through aromatherapy research (meaning they’re only beneficial when their vapors are inhaled through the nose), limonene also works for certain ailments when orally ingested or applied topically. However, many of these limonene studies looked at essential oils that contain other components besides limonene, so some of the research linked above couldn’t conclusively say that limonene alone triggered those health effects.

It’s possible that limonene alone works just fine, but it may also be one of the players in the so-called entourage, or ensemble, effect.

The entourage effect hypothesizes that weed and full-extract cannabis oils work on patients when all of the plant’s chemical components — cannabinoids like THC, terpenes like limonene, and other compounds like flavonoids and phenols — affect the body all at once, amplifying each molecule’s individual potencies by essentially stacking their effects together. In other words, limonene may need to be combined with dozens, if not hundreds, of other compounds to achieve full medicinal effects.

For folks who enjoy aromatherapy or vaping their cannabis, limonene boils at 348.8°F (176°C).

For tokers who love focused, energetic highs, strains containing ample amounts of limonene may be just what you’re looking for. Although little research has been done on terpenes and their psychoactive effects, some cannabis experts suspect that limonene contributes to alertness and wakefulness offered by certain strains.

According to the database at Leafly, some strains with the highest limonene contents are Hindu Kush, Lemon G, Cookies and Cream, and Original Glue (f.k.a. Gorilla Glue; a.k.a. The Glue or GG4).

However, genetics alone don’t determine a plant’s terpene content. Cultivation and storage temperatures, special feeds, humidity, and other complications due to handling and transport can affect cannabis’s terpene profiles. If your dispensary offers test results, scope those out, and always remember that a seasoned smell test can often confirm the presence of some terpenes like limonene. 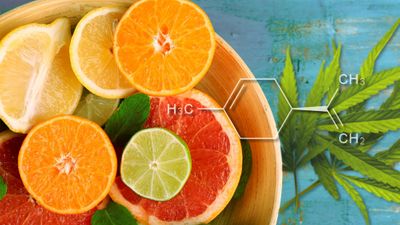 AGRICULTURE
STRAINS
EDUCATION
CULTURE
MORE...
IN THIS STORY
CBD
Click to shop at our CBD store
Randy Robinson
FOLLOW
Based in Denver, Randy studied cannabinoid science while getting a degree in molecular biology at the University of Colorado. When not writing about cannabis, science, politics, or LGBT issues, they can be found exploring nature somewhere in the Rocky Mountains. Catch Randy on Twitter and Instagram @randieseljay
Share this article with your friends!
AD
By using our site you agree to our use of cookies to deliver a better experience.
Accept
Decline
MORE FROM MERRY JANE