CULTURE
WTF Is Myrcene and What Does This Cannabis Terpene Do?
AD
Get to know one of the most common terpenes found in cannabis. How does it affect your high, and what are the benefits of myrcene?
Published on November 21, 2019

What does the citrus scent of OG Lemon Haze have in common with the pine aroma wafting off a fresh crop of Blue Aurora? In both cases, terpenes are to thank for the potent, specific smells and tastes attributed to various strains of cannabis. We can also rightly credit them with playing a significant role in how various strains of weed make us feel. Whereas we once relied solely on the volume of cannabinoids like THC and CBD present in a strain to determine outcomes and effects, we now know that terpenes are a critical factor to consider, as well.

Terpenes are naturally produced aromatic compounds. They are not endemic to cannabis either — many plants, fungi, and herbs are chock-full of terpenes, too. Terpenes serve a variety of functions: pollinators rely on them to distinguish among plants, the aromas repel unwanted animal interaction, and they also make our pot taste and smell delicious.

Only recently have scientists begun to fully understand the benefits of terpenes in relation to the human body, though people have utilized terps for various effects across history. Linalool, for example, is reputed to have anti-anxiety properties, while limonene has been shown to reduce nausea. There are also studies that look at the “entourage effect” — essentially the idea that terpenes (as well as cannabinoids) may work more effectively in tandem than they do in isolation.

Given that a typical cannabis plant produces over 100 terpenes, there is still a wide array of research to be done, but we’ve already begun to understand some of the terpenes that are most commonly found in cannabis. Today, we’re going to narrow our focus to just one: myrcene. 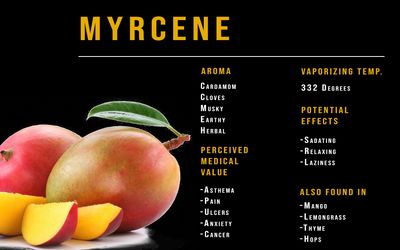 As one of the most common terpenes in commercial cannabis strains, myrcene may be the terp we know the most about. In much lower quantities, myrcene is also found in hops and lemongrass. In relation to the former, myrcene is the terpene credited with giving beer its notes of balsamic, peppery spice. At first smell, one might compare the aroma of myrcene as something akin to cloves. There’s a definite earthiness to this terpene. In addition, myrcene can also be found mango and thyme — though cannabis is certainly the plant you want if you’re seeking this terpene in abundance.

Tests conducted by Leafly found that, “on average, myrcene represents over 20% of the terpene profile in modern commercial strains.” For comparison, caryophyllene — the second-most common terpene in cannabis — represents roughly 13%. This means that cannabis consumers are, on average, putting a lot of myrcene in their systems.

And that’s not a bad thing! Let’s dig into why. 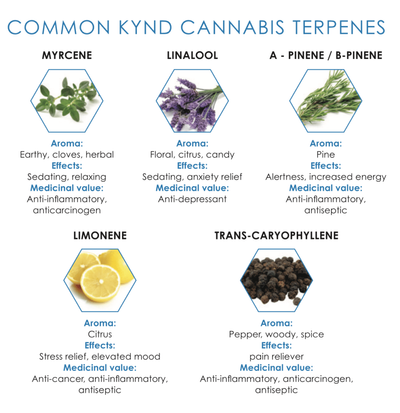 What Are the Effects of Myrcene?

Despite the onslaught of scientific progress with relation to cannabis research we are currently enjoying, our understanding of myrcene’s properties remains informal. In Mexico, tea made from lemongrass (which is rich in myrcene) has long been utilized as a sleep-aid and muscle relaxant. Studies have yet to empirically prove myrcene’s value as an insomnia cure, but tests on rodents have established a correlation between the terpene and muscle relaxation.

There is also evidence to suggest that myrcene may relieve pain, especially in relation to chronic pain and inflammation. Furthermore, myrcene is also known to prolong the psychoactive effects of cannabis. If timed correctly (common wisdom says 45 minutes before consuming cannabis works well), one can actually increase the potency of THC by eating a mango (another plant with significant amounts of myrcene).

Putting It All Together

As mentioned above, the “entourage effect” is an important concept that speaks to the idea that terpenes like myrcene are the most potent and beneficial when they’re included as part of a complex phytocannabinoid environment. In short, terpenes theoretically work even better when multiple are working together. Once you’ve figured out if myrcene is a terpene of choice for you, the next step is learning about all the wonderful ways in which different terpenes interact with one another to create an ideal high.

AGRICULTURE
420
EDUCATION
MEDICAL MARIJUANA
MORE...
IN THIS STORY
CBD
Click to shop at our CBD store
Zack Ruskin
FOLLOW
Zack Ruskin is a cannabis and culture journalist living in San Francisco. Follow him on Twitter: @zackruskin.
Share this article with your friends!
AD
By using our site you agree to our use of cookies to deliver a better experience.
Accept
Decline
MORE FROM MERRY JANE