CULTURE
What Are Terpenes, Exactly?
AD
Terpenes are poised to become the weed industry’s next big thing. What are they, and why should you, a cannabis consumer, even care?
Published on July 15, 2019

Terpenes are what give cannabis its trademark scents, flavors, and — some say — its unique moods and psychoactive effects. The typical cannabis plant produces over 100 terpenes, but why? And how do terpenes affect the average cannabis consumer’s overall heady experience? 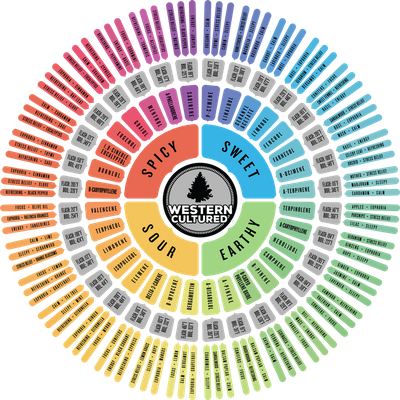 Terpenes are aromatic compounds naturally produced by not only the cannabis plant, but other plants, herbs, and fungi, as well. Aromatic compounds, at the teeny tiny molecular level, are flat, ring-shaped molecules. The ring shape makes these compounds incredibly stable, meaning they don’t usually react with other molecules. However, just because a molecule doesn’t easily react with other molecules doesn’t mean it cannot have profound effects on the mind and body.

Cannabis Evolution and the Terpene

Plants likely evolved terpene production millions of years ago as both a natural defense and to enhance the plant’s ability to reproduce. As a defense, some pests find terpenes like linalool and pinene incredibly offensive, and won’t munch on plants that generate these chemicals. Other terpenes, like myrcene and limonene, attract pollinators like bees.

Cannabis contains a multitude of terpenes, which, altogether, confer several benefits to the plant. Studies show that pollinators such as bees can tell the difference between one kind of plant compared to another based on terpene scents alone. Since most cannabis strains produce natural pesticides and pollinator-attractors like linalool, pinene, myrcene, and limonene, the evidence indicates that the cannabis plant evolved over the eons to produce terpenes that entice certain advantageous species and animals while repelling others that can hurt it, ensuring its survival and propagation in the wild.

Today, most cannabis is cultivated by humans for medical or commercial purposes. Although modern weed farmers use artificial pesticides, herbicides, and fungicides to protect their crops, terpenes still confer a strong survival advantage for commercially grown strains.

Cannabis consumers have grown pickier about what kinds of weed they want to smoke, and some seek out specific strains for their trademark flavors and bouquets. That alone ensures highly aromatic plants such as Blue Dream, Tangie, Strawberry Cough, and Chem Dog forever remain on dispensary menus. Essentially, the rich terpene contents of many weed plants ensure their survival and propagation within the regulated industry. 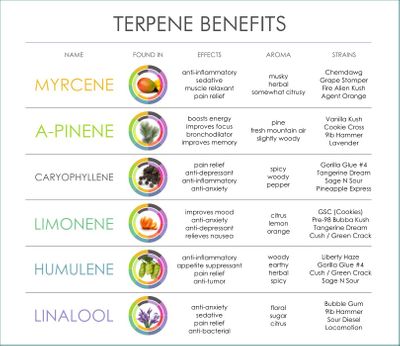 What Terpenes Can Do for You

Cannabis companies often market terpenes for customized or directed highs, meaning they can potentially influence the moods created by weed’s intoxicating effects. You’ve probably seen cannabis products sold for their “focused,” “sleepy,” “calming,” or “energizing” properties, and these properties may be related to cannabis’s terpenes.

Dr. Ethan B. Russo, a neurologist who has researched cannabis for two decades, proposed that terpenes can affect our weed highs through the entourage, or ensemble, effect. The entourage effect says that all the chemical components in cannabis – not just THC or CBD – contribute to the ways we experience our highs (and how we respond to medicinal marijuana, too). Basically, terpenes can interact with our endocannabinoid system, and when combined with THC and CBD, the high becomes richer, more complex, and more nuanced.

For instance, some OG cultivators believe that terpenes contribute to weed’s “creeping effect,” where the buds’ elevating effects come on slowly, allowing the consumer to ease into the experience rather than acutely getting hit by the high all at once. Terpenes, in combination with other cannabinoids like CBG, CBN, and THCV, could explain why some cannabis strains make us sleepy and chill while others get us wired and anxious.

Furthermore, studies on aromatherapy show that if some terpenes from essential oils are inhaled, they can stimulate receptors inside of our nose that make us feel calmer or more alert. However, these studies focus on gaseous forms of terpenes generated by gently heating essential oils, not combusting them with a flame.

Combustion of these same terpenes, such as under a lighter when puffing a bong, have not been thoroughly studied, and may not confer the same psychoactive effects as aromatherapy. One company, Silver Surfer, offers specialized vaporizers that can vaporize weed while heating essential oils at the same time.

As for orally ingesting terpenes for psychoactive effects, again, little research has been done here, too. Since terpenes are incredibly fragile and likely decompose in the stomach’s acidic environment, there may be few, if any, psychoactive benefits from consuming cannabis edibles that contain terpenes. 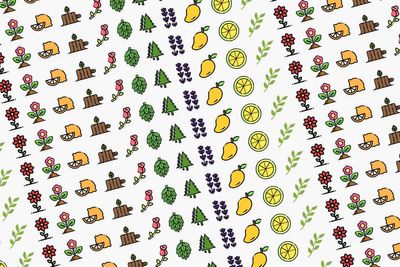 Myrcene: The most common terpene in commercial cannabis strains, evidence suggests it may prolong THC’s effects. Myrcene is also found in mangoes — but you should know you’ll get far more myrcene from smoking dank weed than you would from eating a bunch of tropical fruit. Strains with high myrcene content include Blue Dream, AK-47, and OG Kush.

Limonene: A citrusy terpene that can heighten alertness and wakefulness in aromatherapy studies. Also found in limes, lemons, and oranges. Strains with high limonene content include Hindu Kush, Cookies and Cream, and GG4.

Pinene: A terpene that smells like pine needles, and another that could enhance alertness. Also found in conifer trees, eucalyptus oil, and certain types of limes. Strains with high limonene content include Snoop’s Dream, Black Cherry Soda, and OG Kush.

Caryophyllene: Another terpene that may contribute to the energizing effects of certain weed strains. Also found in carrots and spicy peppers. Strains with high caryophyllene content include Cookies (a.k.a. GSC), Death Star, and GG4.

Terpenes evolved in plants as an adaptation to environmental pressures, either from pests or for reproductive purposes. In today’s regulated market, terpenes are prized for distinguishing one weed strain from another, and some producers even add terpenes into products such as distillates or extracts to jack up their aromatic contents.

Currently, both private and academic researchers are studying terpene compositions in cannabis to better understand how the plants contribute to our recreational and medicinal experiences. And we may soon see weed products designed to feature much rarer cannabis terpenes that would not otherwise naturally express themselves in wild-grown plants.

RESEARCH
CULTURE
FLOWER
FLOWER STRAINS
MORE...
IN THIS STORY
CBD
Click to shop at our CBD store
Randy Robinson
FOLLOW
Based in Denver, Randy studied cannabinoid science while getting a degree in molecular biology at the University of Colorado. When not writing about cannabis, science, politics, or LGBT issues, they can be found exploring nature somewhere in the Rocky Mountains. Catch Randy on Twitter and Instagram @randieseljay
Share this article with your friends!
AD
By using our site you agree to our use of cookies to deliver a better experience.
Accept
Decline
MORE FROM MERRY JANE