CULTURE
Can Cannabis Terpenes Really Customize or Direct Our Highs?
AD
Terpenes are certainly a buzzword in the world of the weed, but how much do these smelly compounds actually contribute to the plant’s famous high?
Published on February 17, 2020

While the rest of the world is still catching up to the difference between THC and CBD, more seasoned cannabis consumers are turning their attention away from cannabinoids and toward a more common class of plant molecule: terpenoids or terpenes.

Terpenes, unlike THC, aren’t unique to cannabis. They’re found in practically every plant, from fruits to flowers to roots. Terpenes are responsible for the aromas and flavors found in cannabis (and other plants), and — according to a growing number of cannabis patients, advocates, and marketers — terpenes may be responsible for the different kinds of highs people experience from weed, too. 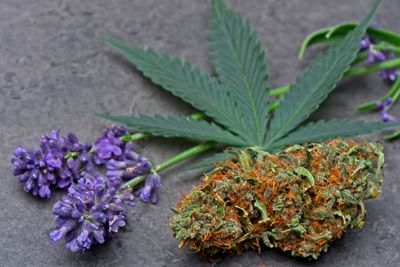 The Science, in a Nutshell

The main chemical in weed that gets people intoxicated is delta-9-tetrahydrocannabinol, or THC. (Though scientists recently discovered another naturally-occuring weed compound, THCP, that may be 30 times stronger than plain ol’ THC, so stay tuned for updates on that.) We know that if someone consumes pure THC (e.g. a THC distillate or isolate), they will get high. But the effect from pure THC feels much different from, say, smoking a joint of cannabis flower or hitting bud out of a bong. People who dab distillates or who have been injected with pure THC report feeling more anxious and paranoid than those who’ve simply blazed a joint.

Based on self-reports with pure THC, we know that THC isn’t the only part of cannabis that affects the head high. Other cannabinoids such as CBD likely blunt THC’s high rather than enhance it, but we have some clues indicating that terpenes may be the other primary ingredients when it comes to weed’s psychoactive effects.

For instance, weed with high levels of THC (25 percent or more THC by dry weight) isn’t always the most potent. Sometimes buds with just 15 percent THC can hit much harder, according to self-reports. We also have self-reports that weed rich in terpenes such as limonene, myrcene, linalool, pinene, and beta-caryophyllene trigger a “creep” effect, where the THC high comes on much slower and lasts much longer than highs from low-terpene strains.

How does this creeping effect occur? Again, scientists don’t really know. But, we do know that many terpenes bind to our CB receptors, the parts of our cells that interact with the compounds found in weed. When THC binds to the CB1 receptors in our brain and nerves, it gets us lit. However, a 2019 study found that the most common weed terpenes don’t activate our CB1 receptors the way that THC does, but they will “stick” to those same receptors, which temporarily blocks THC from doing its thing. So, what’s likely happening is when someone smokes or dabs a terpene-rich weed product, the CB1 receptors get saturated in terpenes. And as those terpenes fall off the CB1 receptors, THC takes their places, hence the “creeping” effect of the weed high coming on slower and lasting longer.

There are also studies that show that inhaling certain terpenes can activate smell receptors in our nose, which can trigger certain psychoactive effects. For example, when mammals smell limonene, it usually causes them to feel more alert and awake. However, many of these aroma studies are still in their infancies, and the findings don’t apply to all terpenes found in cannabis. 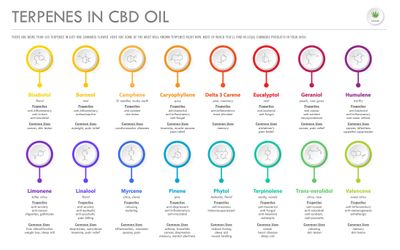 But Can Terpenes Customize or Direct a Weed High?

Any cannabis consumer can test for themselves the effects terpenes have on weed intoxication. Simply dab a relatively pure THC product such as diamonds or distillate, then compare that experience to a similar product that contains added terpenes, such as a “sauce” or high-quality weed vape oil. Consumers often report that the added terpenes will feel significantly different from hitting pure THC, but those differences will vary from consumer to consumer.

Right now, many cannabis companies market their products according to “mood” or “effect.” You’ve likely seen this at your local dispensary: A weed extract, vaping cartridge, or even edible may be sold not by its strain of origin, but rather by its intended effect. For example, you may see a product branded for “Relaxation,” “Energy,” “Focus,” or even “Horniness.” The idea is that these products contain specific terpene blends designed to provide users with these effects. However, the science on whether a particular terpene always generates a particular effect remains hazy at best. 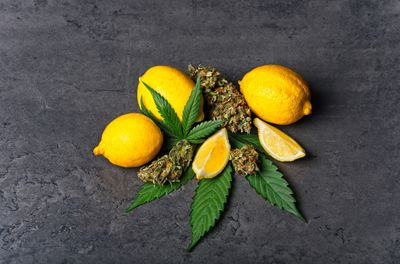 So, yes, terpenes very likely influence what kinds of moods or highs we experience, but those experiences will vary depending on the individual consumer. For instance, limonene and other fruity-smelling terpenes may cause some consumers to feel sleepy or couch-locked, while other consumers may feel a jolt of energy from these same terpenes. Others may find that myrcene or skunky-, gassy-smelling terpenes cause them to feel paranoid, while still others may find deep, soothing relaxation from those same stanky terps.

Basically, only you, the individual consumer, can know which terpenes or terpene mixtures will give you the desired effects you’re looking for. If fruity smelling weed products knock you out, then you know to avoid those products if you need something to keep you awake during the day.

One’s personal reactions to terpenes doesn’t necessarily invalidate the way cannabis companies currently market their weed products, though. If anything, promoting a product for “Relaxation” or “Focus” may give consumers some idea of what they’re about to buy, even if their brains and bodies don’t exactly jive with the product’s labeled effect. In the same vein, allergy medications such as Benadryl usually cause drowsiness in most people, but some people find that allergy meds do the exact opposite and will provide them a burst of energy, just as some people feel lethargic from drinking coffee whereas other people can’t even get through the workday without slamming 10 cups of espresso.

Some Additional Info on Eating Terpenes

Some cannabis edibles, tinctures, and drinkables are marketed for directional or customized highs based on their terpene contents, just as inhalable products are. However, terpenes are incredibly fragile, and most quickly degrade in the stomach’s highly acidic environment. Although the science is still out on whether terpenes can affect a weed high when they’re swallowed, they likely don’t do much after passing through the digestive system. However, inhaling terpenes in addition to consuming an edible or drinkable may still confer the terpene’s effects on the weed high if smoked, vaped, or dabbed at just the right time.

RESEARCH
SCIENCE
STRAINS
CANNABINOIDS
MORE...
IN THIS STORY
CBD
Click to shop at our CBD store
Randy Robinson
FOLLOW
Based in Denver, Randy studied cannabinoid science while getting a degree in molecular biology at the University of Colorado. When not writing about cannabis, science, politics, or LGBT issues, they can be found exploring nature somewhere in the Rocky Mountains. Catch Randy on Twitter and Instagram @randieseljay
Share this article with your friends!
AD
By using our site you agree to our use of cookies to deliver a better experience.
Accept
Decline
MORE FROM MERRY JANE