NEWS
How Many Ounces Are in a Quarter Pound of Weed?
AD
So you want to know how much a shitload of weed weighs, huh? You've come to the right place. Here's how many ounces are in a quarter-pound of weed.
Published on October 15, 2020

Few weight units possess the OG status of the quarter pound, better known on the streets as the QP. Although you may hear about QPs, most folks will never see a QP of weed, simply because it’s too much smoke for most tokers. During the heyday of pot prohibition, stoners only ever dealt with QPs if they were dealing weed. Today, licensed cannabis companies also deal in QPs, but usually only to other licensed cannabis businesses.

In fact, a QP contains so much weed that it’s illegal for the Average Joe to possess that much throughout most of the US – even in some states where weed is legal.

How much herb gets packed into a QP? As a rule, tokers generally buy or carry single ounces or fractions of ounces (e.g. an “eighth”), so let’s visualize a QP according to what’s familiar. Another common weight — the pound — will help here, too.

In other words: there are 4 ounces in a quarter pound of weed.

Those peanut-butter-jar-sized bottles you see on dispensary shelves (or piling up in your sesh den) typically hold about an ounce. So, a QP is about four of those bottle-jar things. Yet the casual smoker can take weeks, if not months, to burn through a single ounce of herb, much less a QP.

And, in many legal states, sitting on more than an ounce of bud can get you busted by the cops. That’s because, for decades, cops and courts considered anyone in possession of a QP (or even just a few ounces) to be drug dealers, whether those suspects were actually slangin’ green or not.

But... some enlightened US states cap their max legal weed weights at precisely one QP. And even better, a small handful of states will allow some people (as in, qualifying medical cannabis patients) to legally possess more than a QP.

Which states will let you possess enough weed to smoke even Snoop under the table? Keep reading. States Where You Can Legally Possess a Quarter Pound of Weed

Before you pack up and move to one of these, ahem, “high” possession states, know that these “up to a QP” maximum weight limits may only apply to medical patients, depending on the state. Recreational customers, generally, are capped at 1 oz of flower, but again, that varies by state, as well.

Every state has different rules for weed, and we won’t be going over all that fine print here. So, treat these listings as road signs pointing in general directions, not as detailed topographical maps guiding you through the entirety of the legal terrain (as always, check the state’s laws for details).

The states where you can possess up to a QP of weed are Alaska, Florida, Hawaii, and Missouri. And, make sure to double check the fine print. For instance, it’s important to know that you can only possess a QP of weed in Alaska so long as that dank stays in your home. No ghost riding the whip with your quarter pound bag of weed sitting in the passenger seat (or anywhere), unfortunately. 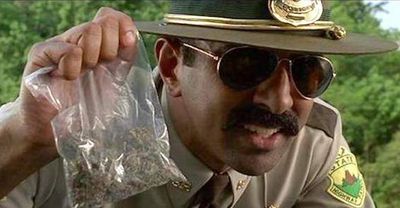 Yes, there are some states where qualifying medical patients can possess over a QP of weed. These states are California, Delaware, Massachusetts, Michigan, Oregon, New Mexico, and Oklahoma. But we also want to shout out Washington State for its lax limits on concentrates.

In Minnesota and Ohio, there are no possession limits for medical patients. But there is a catch: Patients can only possess non-smokable forms of cannabis, so that means tried-and-true blazable buds are out of the equation.

That leaves California as the only state where there are no patient possession limits for fire weed. Stack those quarter pounders like McDonald’s patties, son!

Anyway, the takeaway here is that there are 4 oz in a quarter pound. And if you truly need a QP just to catch a buzz, you’ve got iron lungs, an incredibly debilitating illness, or an insanely high tolerance. Maybe all three? Either way, read up on the cannabis laws in your city and state to know how much weed you can have in your possession at once — it’s part of being a responsible pothead.

LEGALIZATION
ADULT-USE LEGALIZATION
WEED
POUNDS
MORE...
MERRY JANE Staff
FOLLOW
MERRY JANE is based in Los Angeles, California and is dedicated to elevating the discussion around cannabis culture.
Share this article with your friends!
AD
By using our site you agree to our use of cookies to deliver a better experience.
Accept
Decline
MORE FROM MERRY JANE