CULTURE
How Much Weed Is in an “Eighth” Exactly?
AD
An eighth is probably the most common measurement for packaging weed, but how much pot is that? And are you getting ripped off?
Published on August 28, 2019

When purchasing weed, either in a legal dispensary or from that sketchy dude behind Safeway, there are three common measurements: a gram, an eighth, and a quarter.

What do these measurements entail, exactly?

In America, we live in this weird limbo state where we try to juggle the international (and incredibly sensible) metric system with the outdated English nobility measurement system. Sometimes we’ll measure stuff according to the metric system (e.g. centimeters, grams), while other times we use the English system (e.g. inches, feet, ounces, pounds). This causes a lot of confusion when it comes to measuring goods where every gram — and every cent — counts.

Why is it confusing? Because switching back-and-forth between the English system and the metric system requires conversion calculations, and those conversions are never perfect. Value, and money, gets lost in that calculation process.

OK, So What’s an Eighth?

Those differences in values mean that every toker has gotten stiffed — albeit slightly — whenever they bought weed. Here’s why.

While a third of a gram may not sound like a lot, consider how much weed some cannabis consumers purchase in a year. Let’s assume one ounce a month for the average everyday toker. After a year, that means said customer was shorted a total of 4.194 grams of weed over a 12-month period, which is more than — gasp! — a full eighth of weed! 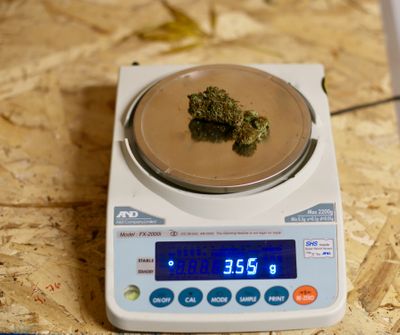 An 8th of weed is technically 3.55 grams of weed (Photo by Tolula)

Are You Getting Ripped Off?

Probably, sort of, kind of, but not exactly. Prepackaged food producers don’t measure their goods to the exact amount reported on the labels, but they try to get those measurements as close as possible.

Most cannabis consumers and sellers generally agree on the “3.5 grams per eighth” rule because most commercially available scales, whether pocket scales or digital, can only reliably report measurements to the “tenths” digit, i.e. the digit that comes immediately after the decimal point. That’s assuming it’s a decent scale; most pocket scales can only reliably report values to the nearest whole number (in the eighth example, that would be the “3” before the decimal point, with any values after the decimal point being mere guesses).

While that “3.5 rule” may have worked well in the prohibition era, operators in weed-legal states don’t have this same “But My Scale Sucks” excuse. If they’re selling weed by the “eighth of an ounce,” then to do so honestly, they should measure it out to 3.5436 grams as possible. Rounding errors below 3.5436 grams benefit only the business, not the customer. 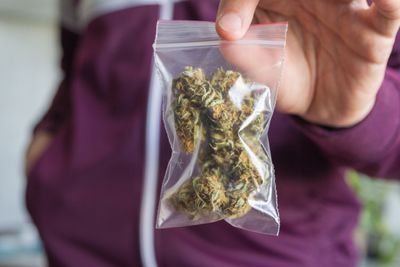 Is your favorite dispensary following the 3.5-rule for measuring eighths, or does it follow the IUPAC standard at 3.5436 grams? You can always peep the scales at the dispensary, assuming your budtender actually weighs your purchase in front of you.

But as dispensaries get slammed with higher customer traffic, more pot shops are pre-weighing and pre-packaging their weed, meaning you’ll have to wait until you get it home to weigh it out. And by then, you already opened the package, so good luck convincing your seller that they shorted you some good weed.

EDUCATION
CULTURE
WEED
MARIJUANA
MORE...
MERRY JANE Staff
FOLLOW
MERRY JANE is based in Los Angeles, California and is dedicated to elevating the discussion around cannabis culture.
Share this article with your friends!
AD
By using our site you agree to our use of cookies to deliver a better experience.
Accept
Decline
MORE FROM MERRY JANE