CULTURE
Are “Monopoly” Vape Carts Legit? And How Can You Tell If They’re Fake?
AD
Monopoly vape carts come with some delightfully eye-catching packaging. But their appeal should stop at their visual aesthetics.
Published on October 23, 2019

Let’s start off with this: Monopoly brand weed vape cartridges are fake. Yes, they’re really out there, and you can buy them direct from the producer’s website. But all Monopoly vape products are unlicensed, not lab-tested for safety or quality assurance, and could possibly pose substantial health risks if you puff on them.

Monopoly carts are known for their incredibly colorful packaging, which feature Uncle Pennybags, a.k.a. the monocled Monopoly man. Some Monopoly cart packages also include Betty Boop and the Pink Panther.

Stating that Monopoly carts are fake is one thing. But how can you tell? There are several damning clues, namely the brand’s gross violation of US trademarks, the fact that no licensed company or owner can be traced to the brand, and that its producer openly announces mail-order sales sent out-of-state and internationally. 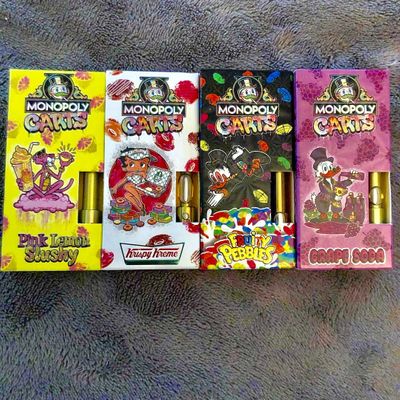 Clue #1: Violation of US Trademarks

Monopoly vape carts borrow their brand name and mascot from the “Monopoly” board game, which is owned by Hasbro. Hasbro pegs itself as a “family-friendly” company that publishes games appropriate for all ages, so the chances of it jumping into the adults-only legal weed industry right now are about zero. (If Hasbro did lend its “Monopoly” trademark to a weed company, MERRY JANE would be all over that coverage.)

Furthermore, many Monopoly vape products also feature the cartoon character Betty Boop on them, as well. Betty Boop’s trademark is owned by Fleischer Studios, a subsidiary of Paramount Pictures. And while Betty Boop is known for being a dark-comedy figure who often espoused what we’d call “adult themes,” she hasn’t been tied to any part of the legal weed industry. Again, there have been no news reports or press releases regarding Paramount Pictures or Fleischer Studios partnering with a weed company. The same goes for Pink Panther, whose trademark is owned by Metro-Goldwyn-Mayer Studios.

So, why hasn’t Hasbro or Fleischer Studios gone after whoever is making Monopoly vape carts with lawsuits galore? No one knows who’s actually producing Monopoly carts, and the identity of a specific individual, organization, company, or institution violating a copyright is required to file a lawsuit. 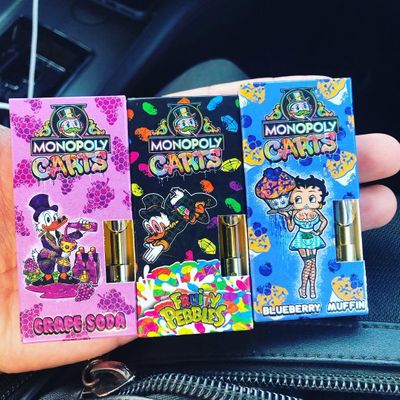 All state-licensed cannabis companies must be incredibly transparent both with the state and with the public. That includes business information at the company’s websites and on their product packaging.

Yet Monopoly vape carts don’t include any of that info on their packaging, nor does their website clearly detail who they actually are. The website mentions that business is located somewhere in Las Vegas, Nevada, but no street numbers or names are listed.

This is probably the biggest giveaway that Monopoly carts are fake. If you visit their website, you’ll notice a pop-up every couple of minutes announcing that someone, somewhere, made a Monopoly vape purchase online. The website won’t reveal the customer’s identity, but it does state where the order was made and where it will ship to.

Currently, every weed-legal state is banned from shipping licensed marijuana products out-of-state. Yet the Monopoly vapes site claims that customers in Wyoming, the UK, and Canada recently ordered its THC-infused products. No compliant weed company would ever ship its products across state lines, and even if they did, they definitely wouldn’t announce it every few minutes on the internet.

In addition to breaking state laws by shipping weed products out-of-state, doing so violates federal laws, too. America’s mail system is federally regulated, so no marijuana products of any kind, even if they’re state-licensed or sent in-state, can be legally sent through the mail. 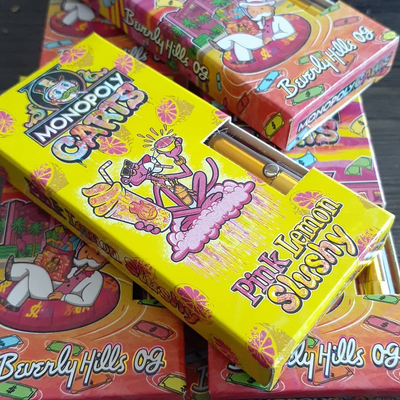 Why You Should Avoid Monopoly Vape Carts

Since Monopoly vape carts are unlicensed and not lab-tested, you have no idea what’s in the oil or if the carts were made in compliance with state and federal safety regulations. There’s a vaping illness crisis rocking the US right now, which has sent nearly 1,500 people to the hospital and killed at least 33. Authorities still don’t know what’s causing the illness, but they suspect that unlicensed, unregulated, underground vape products are responsible — like those offered by whoever’s slinging Monopoly carts.

If you’re buying illicit vape carts because of their pricing, know that Monopoly vapes’ prices are on par with licensed and tested products you can purchase in weed-legal states. But if you’re buying illicit carts because weed isn’t yet legal in your state, consider writing to your lawmakers or volunteering with some advocacy groups to get the laws changed where you live.

HEALTH
EDUCATION
SAFETY
VAPING
MORE...
MERRY JANE Staff
FOLLOW
MERRY JANE is based in Los Angeles, California and is dedicated to elevating the discussion around cannabis culture.
Share this article with your friends!
AD
By using our site you agree to our use of cookies to deliver a better experience.
Accept
Decline
MORE FROM MERRY JANE