CULTURE
Are Cereal Carts Legit? What Do “Fakes” Look Like?
AD
Anything labeled a "Cereal Cart" is unlicensed and unregulated, but now there are knock-offs of this popular black market vape cartridge. How do you tell the difference?
Published on August 15, 2019

Black market vape cartridges have flooded the cannabis market, as we’ve written about time and time again. Some of these vapes are unlicensed products made by companies that are operating illegally. Some of these vapes are knock-offs of well-known and fully-compliant cannabis brands. When it comes to anything dubbed a “Cereal Cart,” however, you’re basically dealing with both scenarios at the same time.

What Are Cereal Carts?

All Cereal Carts are unlicensed and unregulated; any cannabis brand operating under the name is distinctly part of the black market underground. As such, the original provenance or creator of Cereal Carts is impossible to confirm. Currently, there are many different manufacturers, hustlers, or “companies” — if you can even describe them like that — that create vape cartridges with the breakfast food slapped on the label, meaning there are now knock-offs of this black market “brand.” A knock-off of a knock-off, in a way.

Online chatter seems to indicate that DankWoods — known for their luscious (and also illegal) pre-rolled blunts — originally popularized Cereal Carts, but again, that cannot be confirmed. DankWoods is the same company responsible for the unlicensed Dank Vapes flooding the black market.

It should go without saying, DankWoods is not a legit (meaning “licensed”) business, so there is no guarantee of quality or safety from anything they’re pushing. There’s a reason neither DankWoods nor Cereal Carts are carried at legal dispensaries.

Still, some people (including your dealer, probably) claim that the original Cereal Carts are reputable and worth smoking. And, we have to admit, they look fun. The packaging rips off actual children’s cereal boxes, including images of the Honey Nut Cheerios bee and the Cinnamon Toast Crunch chef looking high as hell.

But since no Cereal Cart is licensed or lab tested, we highly recommend avoiding anything labeled as such, especially since people are now making lower quality versions of the original unlicensed vape line.

How to Spot a Fake Cereal Cart

If you want to tell the difference between an original Cereal Cart, and a “fake Cereal Cart” (meaning a knock-off of the unlicensed product), here’s a quick guide: 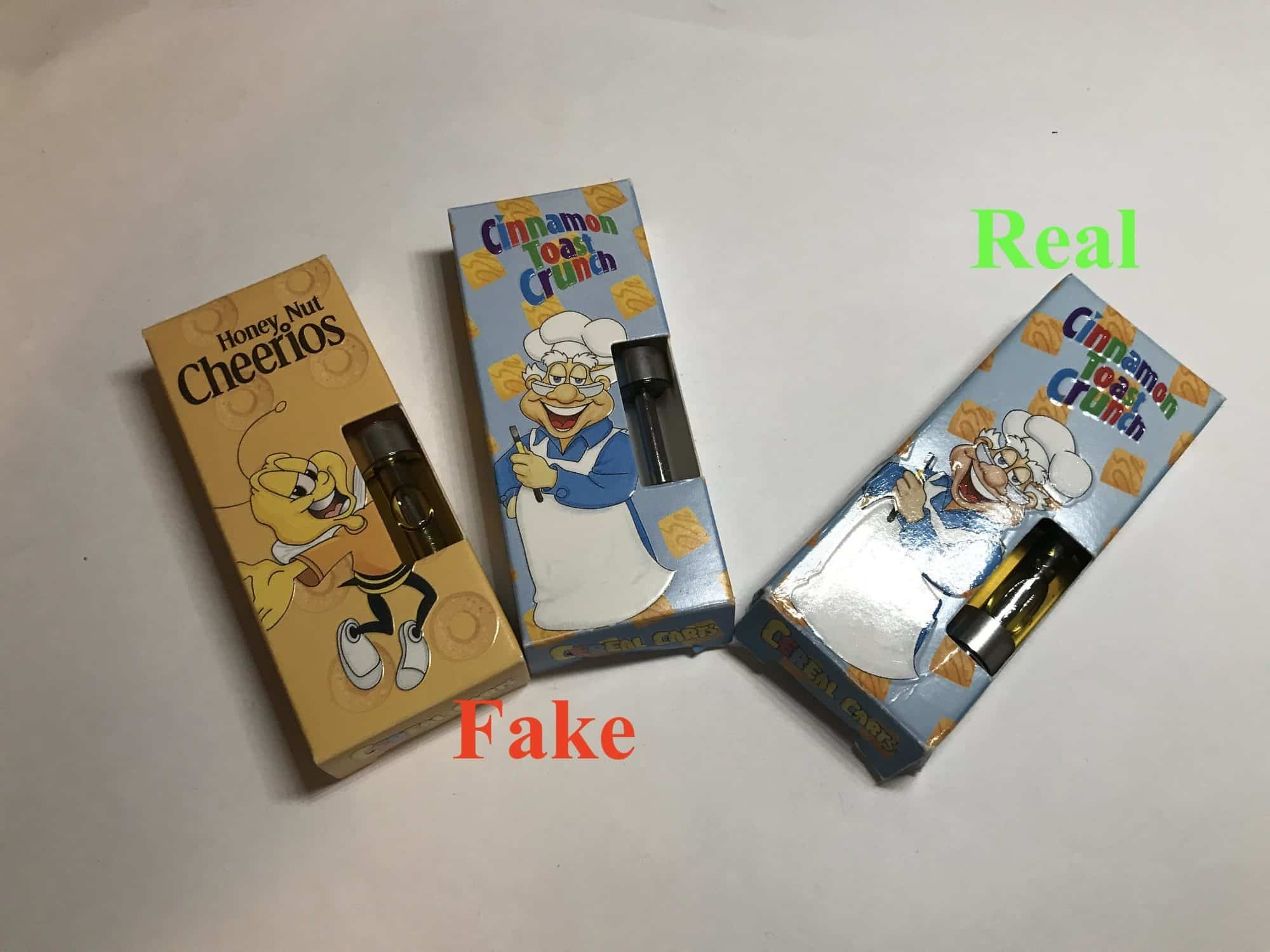 Along with packaging, it is much easier to spot a fake Cereal Cart when you are familiar with what THC oil is supposed to look like. When it comes to legit oil cartridges, typically it’s better if the oil is clear. OG Cereal Carts will be filled with a light-yellow oil, and should be close to translucent. There are Cereal Carts made with darker oil, but this is usually just a sign of lower-quality wax.

The oil inside fake Cereal Cartridges, however, can resemble an unnatural yellow color with a thinner consistency. Unfortunately, even the most experienced vapers can struggle with distinguishing the difference between solid and bunk oil (at least via sight and smell), as these fraudulent manufacturers are getting more and more clever. 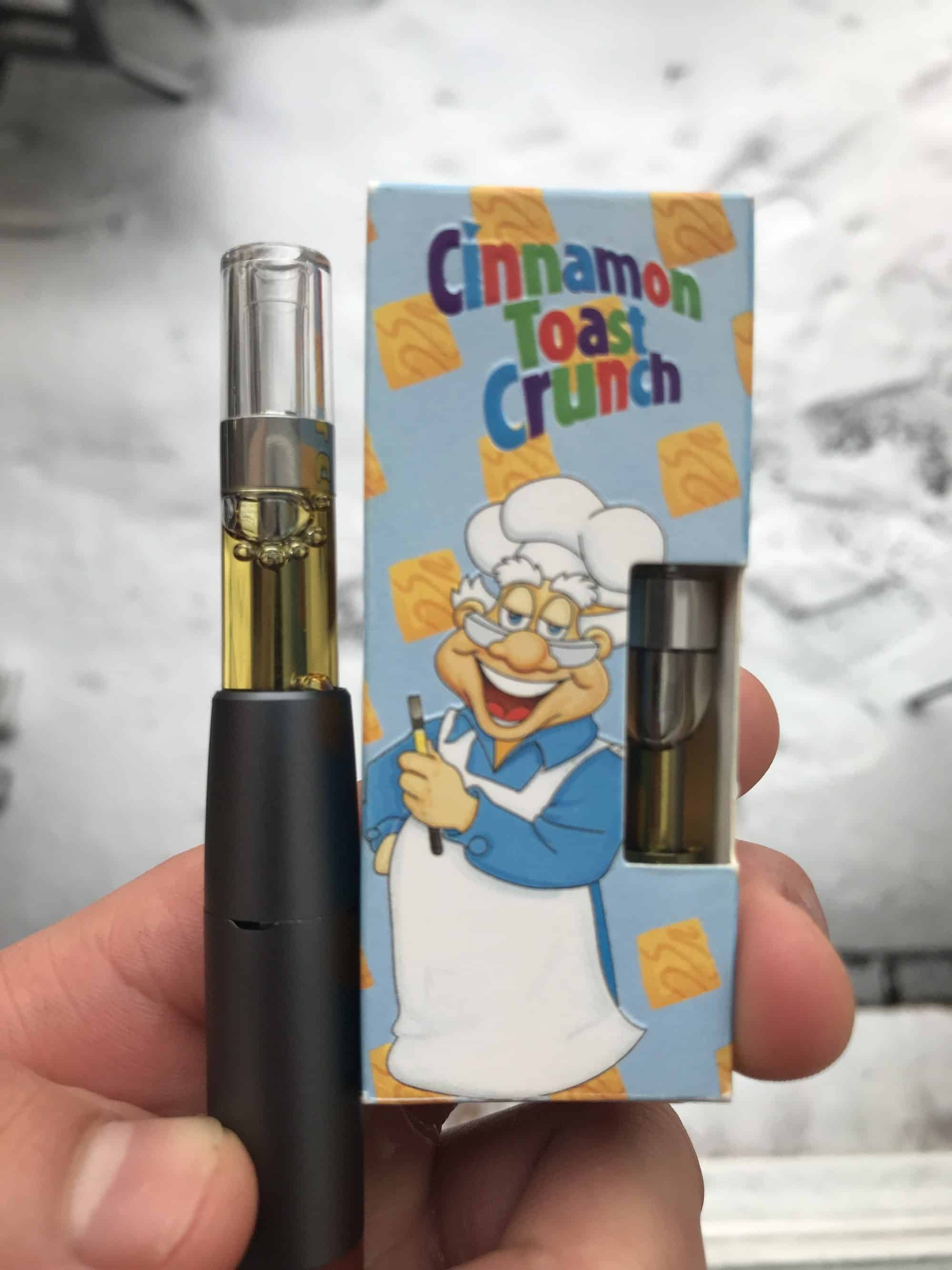 Since the packaging on these fake carts is almost indistinguishable from the original black market Cereal Carts, most buyers won’t realize their mistake until they actually try smoking it. But there is no confusing the taste of an original Cereal Cart versus a knock-off. Knock-off Cereal Carts taste awful and lack the noticeable flavonoids and terpene profiles that OG Cereal Carts have. Almost always, you will realize your mistake after the first hit.

If you’ve examined the packaging, the color, and the consistency of your Cereal Cart, and are still unsure of its legitimacy, you can check for CCELL marking. We realize this might be confusing, as CCELL typically makes vape batteries, and the company is legal. Still, the original black market Cereal Carts ripped their branding, and ripped it well.

On the bottom of every original Cereal Cart, you’ll find the markings of the vaporizer company CCELL, the serial number of the cart, and a bold “K,” all stamped in small white letters. Fake Cereal Carts will sometimes attempt to recreate these marks, but the font will not match the original ones. 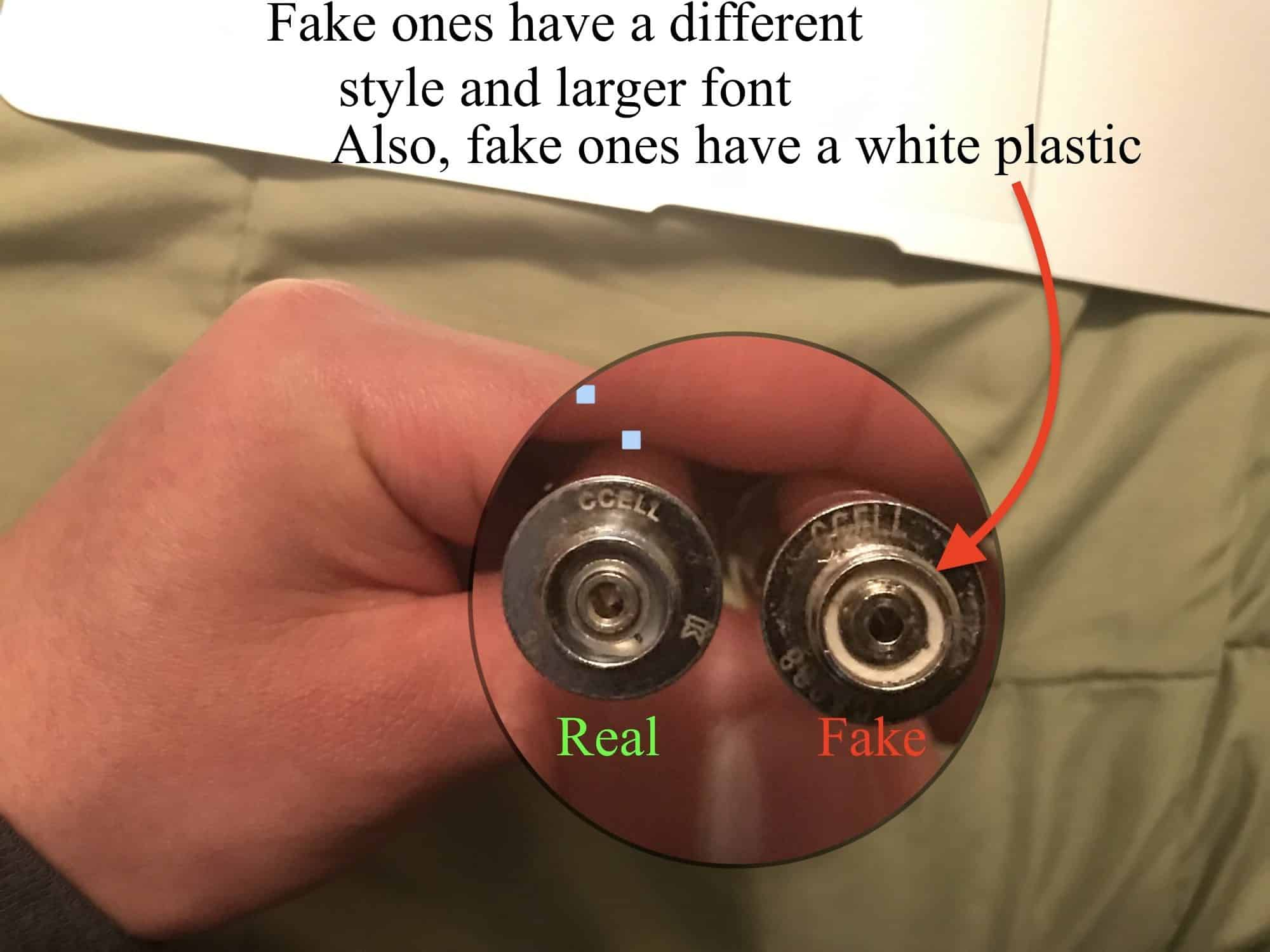 Why Are All Cereal Carts Potentially Dangerous?

Manufacturers will use whatever products they deem necessary to create a substance with a similar color and consistency that match real oil cartridges. This means that what you may think is THC oil may just be plain ol’ vegetable glycerin. The fake carts could also be made with terpenes that provide a lot of flavor but end up diluting the THC content. In the worst case scenario, fake carts could be riddled with pesticides or other unwanted and dangerous substances.

To be clear, even the original Cereal Carts aren’t sold at licensed dispensaries and they are not guaranteed to be safe, tested, or accurately labeled. Simply put, if you do not want to find yourself accidentally smoking vegetable glycerin or dangerous pesticides, avoid any and all Cereal Carts, original ones or knock-offs. It’s crucial to purchase your carts from legal producers and dispensaries. Otherwise, who knows what you might be inhaling.

Are “Dank Vapes” Legit? And What Do Knock-Off Carts Look Like?

VAPE
CRIME
BLACK MARKET
VAPING
MORE...
MERRY JANE Staff
FOLLOW
MERRY JANE is based in Los Angeles, California and is dedicated to elevating the discussion around cannabis culture.
Share this article with your friends!
AD
By using our site you agree to our use of cookies to deliver a better experience.
Accept
Decline
MORE FROM MERRY JANE