CULTURE
Are "Dabwoods” Vape Carts Legit? And How Can You Tell If They’re Fake?
AD
Dabwoods’ slogan is the “World’s Greatest Blunts Meets Cali’s Best Oil.” But the “brand” is definitely ripping off Backwoods’ logo and designs. In other words, Dabwoods is not a legal company.
Published on October 30, 2019

Backwoods blunts are the crème de la crème of all hand-rolled blunts. Since Backwoods papers are made from actual, dried tobacco leaves, and rolling one of these suckers requires immense skill and patience, they’re seen as a sign of one’s dedication to the craft and tradition of twisting your own blunts.

So, the vape cartridges that bite the Backwoods brand, known as Dabwoods, ought to offer the same prestige, quality, and flavor as a well-made Backwoods blunt, right? Wrong.

Dabwoods vape carts are all unlicensed and illegal. You should avoid puffing on them, much less buying them at all, if you’re concerned for your health. Here’s how to tell them apart from real, licensed products. 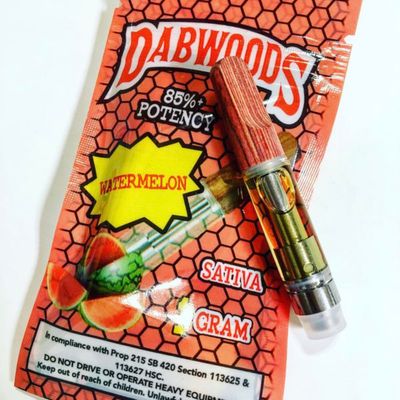 Transparency rules the state-regulated weed industries. Legit weed vape producers want you to know who they are and how they operate. Besides, licensed producers are required to by law.

Fake vape companies that produce unlicensed, untested products won’t list their information anywhere because they don’t exist, as far as state licensing agencies are concerned. In regard to Dabwoods, it’s the same story: No company listed on the packaging, no contact information can be found anywhere, and the company has no website. 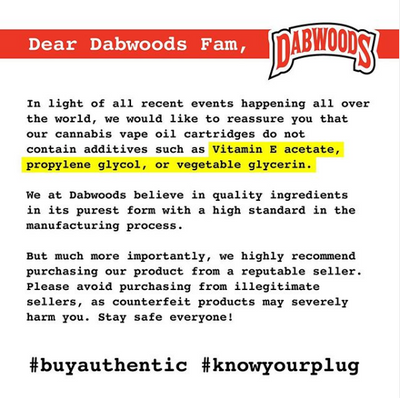 Speaking of harmful contaminants, what’s actually in the Dabwoods cartridges? We have no idea, because the producer doesn’t include any test results with the products.

By law, all licensed marijuana products must contain lab results somewhere in or on the package. Since every product batch will produce slightly different results, this information is always included as a sticker; it’s never printed directly into the packaging. You won’t find these stickers on Dabwoods since Dabwoods aren’t lab tested.

So, sure, the company’s IG account can claim that its products don’t contain pesticides, heavy metals, or cutting agents, but without the lab data, there’s no way to verify those claims.

In addition, the reported THC values for Dabwoods products makes no sense, either. The packages claim the carts contain “85%+” THC, but that’s not how legit weed companies report THC values. The value should always be an exact number (e.g. “85 percent”), and the lab data info will clarify any uncertainties or errors for that value. Labeling packages with THC ranges is not legally acceptable.

Dabwoods Is Dangerously Close to Violating a Trademark

Dabwoods’ slogan is the “World’s Greatest Blunts Meets Cali’s Best Oil.” The brand is definitely ripping off the Backwoods’ logo, typeface, and even package coloring and design schemes. Although Dabwoods hasn’t gone so far as to just straight up call itself “Backwoods Vapes,” it’s close enough to warrant a trademark violation. Other weed companies have been issued cease-and-desist letters or even lawsuits for doing the same thing.

To legitimately mimic the Backwoods brand to this extent, Dabwoods’ producers would need permission from whoever owns the Backwoods trademark. The Backwoods brand is owned, manufactured, and distributed by Altadis USA, and there are no press releases, announcements, or news articles stating that Altadis officially entered the weed business. And if Altadis did, it would definitely become international business news overnight. 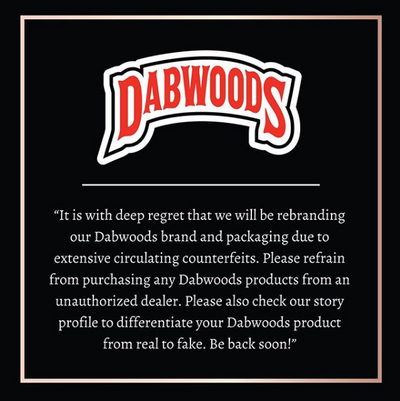 Ironically, even black market weed vapes are being counterfeited by other black marketeers. Dabwoods is no different, but just because its products are being knocked-off does not mean the “original” Dabwoods are legit.

For instance, another fake vape brand, Cereal Carts, has been counterfeited. But again, Cereal Carts are already fake, which just makes the knock-offs even faker. We’ve described these as “meta-fake” in the past. 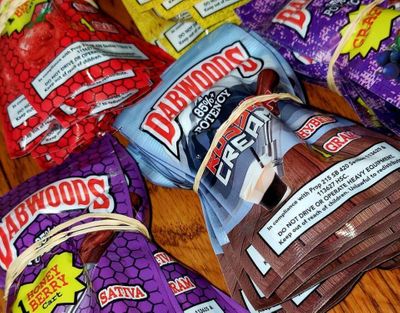 Why It’s Important to Only Buy Legit, Licensed Vape Products

Since Dabwoods carts are unlicensed and not lab-tested, you have no idea what’s in the oil or if the carts were made in compliance with safety regulations. There’s a vaping illness crisis rocking the US right now, which has sent over 1,600 people to the hospital and killed at least 34. Authorities still don’t know what’s causing the illness, but they suspect that unlicensed, unregulated, underground vape products are responsible — like those offered by whoever’s slinging Dabwoods carts.

SAFETY
VAPE
BLACK MARKET
LAB TESTING
MORE...
MERRY JANE Staff
FOLLOW
MERRY JANE is based in Los Angeles, California and is dedicated to elevating the discussion around cannabis culture.
Share this article with your friends!
AD
By using our site you agree to our use of cookies to deliver a better experience.
Accept
Decline
MORE FROM MERRY JANE