NEWS
This Company May Have Finally Created a Pot Breathalyzer That Works
AD
As the legal weed world debates drugged driving, California-based Hound Labs reports that their handheld cannabis breathalyzer passed a successful trial, and will go into production this year.
Published on February 28, 2019

In states and countries where legal weed laws have decreased or eliminated streetside possession arrests, and reduced police power over pot users, highways and traffic jams have become one of the last bastions of cannabis criminality. With DUI laws often considering marijuana intoxication in the same light as alcohol intoxication, and arbitrary blood and saliva tests supplementing nose touching and straight line-walking, the debate surrounding drugged driving has quickly become one of post-legalization’s biggest question marks.

But now, according to Mashable, Bay Area tech company Hound Labs will begin commercial production of a $5,000 cannabis breathalyzer that they say can detect the presence of THC at levels as small as a trillionth of a gram per liter.

The device will reportedly let police or employers check for recent marijuana consumption over a 2-3 hour period, as opposed to using blood and saliva tests, which detect cannabinoids that may have been in the subject’s body for up to a month since the last time they sparked up. 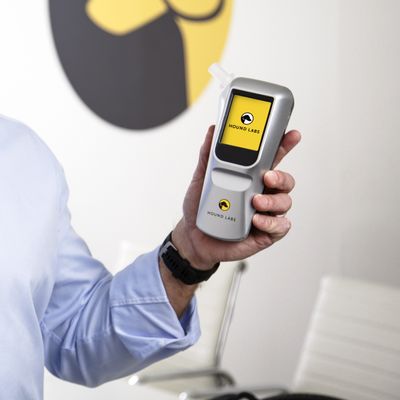 Hound Labs recently teamed up with researchers at the University of California San Francisco for a 20-person clinical trial of their product, telling participants to consume their own personal cannabis before submitting to a breathalyzer test.

Hound Labs CEO Mike Lynn hailed the study as a "significant breakthrough that validates our science and technology," despite the fact that the research has not yet been peer-reviewed or published.

Kara Lynch, the UCSF doctor responsible for the Hound Labs study, told Mashable that financial restrictions stymied a larger trial size and use of control groups.

"No study for the evaluation of THC in breath has been larger to date," Lynch said. "Future studies will be done involving more participants and with varying experimental designs."

Outside of the small sample size trial, cannabis advocates continue to add skepticism to the entire marijuana impairment detection industry, arguing that the plant does not create uniform intoxication levels that can be tested using a standardized procedure.

“The government is creating per se limits for drug concentration, so if you have a certain amount in your body, you’re considered to be impaired regardless of whether or not you’re actually impaired,” Vancouver-based criminal lawyer Kyla Lee told MERRY JANE last year. “[It will] be a challenge for medical users who need cannabis in order to be stable, to be well, or to be able to operate a motor vehicle. Those people could be found guilty of committing a criminal offense for doing something that is medically suggested.”

Hound Labs is planning to begin commercial production of the $5,000 breathalyzer before the year is out. The company’s eventual goal is to sell their product to police departments around the country, as well as construction companies looking to weed out stoned employees.

NEWS
TECHNOLOGY
LEGALIZATION
CALIFORNIA
MORE...
Zach Harris
FOLLOW
Zach Harris is a writer based in Philadelphia whose work has appeared on Noisey, First We Feast, and Jenkem Magazine. You can find him on Twitter @10000youtubes complaining about NBA referees.
Share this article with your friends!
AD
By using our site you agree to our use of cookies to deliver a better experience.
Accept
Decline
MORE FROM MERRY JANE