HEALTH
Drugged Driving in Canada: What You Need to Know in 2018
AD
Up north, there’s a cloud of new laws designed to put the government in the middle of your next smoke session — especially if you toke and drive.
Published on October 18, 2018

This week marks the beginning of nationwide cannabis legalization in Canada, and with it comes a cloud of new laws designed to put the government in the middle of your next smoke session. Along with provincial regulations that render the sale of THC-infused edibles and concentrates illegal (for now), as well as a ban on products featuring pot imagery, three new federal laws have been enacted under Bill C-46 to help regulate what legalization critics seem to fear most — stoned drivers.

According to a recent Health Canada survey, 39% of cannabis users have driven within two hours of getting high, an alarming statistic for opponents who believe that legalization will result in a spike in drug-related deaths. “We think there will be an influx [of people driving under the influence],” Eric Dumschat, Legal Counsel for Mothers Against Drunk Driving (MADD) Canada, told MERRY JANE in a phone interview. “When you look at Washington and Colorado post-legalization, they saw an increase in drug presence in their fatal injured drivers. Maybe it’s because of legalization, maybe it's because they're doing better testing. Regardless, the results are still concerning.”

Along with a new law that allows cops to administer breathalyzers without reasonable suspicion, Bill C-46 puts a legal limit on the amount of THC that users can have in their bloodstream within two hours of driving, and places strict penalties on those who drink and toke. Getting busted with two to five nanograms of THC per millilitre of blood while driving could cost you upwards of a thousand dollars in fines and impound fees, while repeat offenders could face up to ten years in jail.

But just how much weed you can smoke before hitting the two nanogram threshold isn’t exactly clear, and with the criminalization of edibles (which, unlike smokeable weed, explicitly state how many milligrams of THC are contained in a single dose), asking stoners to regulate their cannabis intake seems futile. “What MADD Canada has been saying is you should wait 4-6 hours after you smoke [to drive],” said Dumschat. “This should be extended if you still feel the effects of THC, or if you're a new user.”

To help keep drivers on the straight and narrow, Jody Wilson-Raybould, the Attorney General of Canada, has approved The Draeger DrugTest 5000 — a new roadside screening device that analyzes saliva for the presence of THC. Unlike Standardized Field Sobriety Tests (SFSTs) that rely on police interpretations of individual actions to pursue arrests, roadside saliva screening devices promise a quick, supposedly-unbiased approach to drug testing.

The machine itself is sort of like a Keurig for narcs. First, the driver swabs a tampon-like saliva collector around their mouth — a seemingly invasive procedure for those who are uncomfortable sucking on small phallic objects in the presence of law enforcement. Then, the officer will collect and seal the sample, taking it back to their vehicle and fitting it into the reader like a neat little coffee pod. After approximately four-and-a-half minutes, the machine will cook up a straightforward, easy-to-read result: POSITIVE, NEGATIVE, or INVALID. If the result is positive, the driver will have their vehicle impounded and be taken to the local police station for further blood and drug recognition testing to determine if they are, in fact, high.

The Draeger DrugTest promises to shorten the time frame between roadside testing and arrests, but only functions as a first step in the legal process. Officers must follow up with blood tests and further evaluations, causing municipal police departments to question whether it’s worth it to incorporate device — which costs an estimated $6,000 — into their roadside routine. “A lot of the major police agencies have come out and said they won’t use the Draeger DrugTest 5000, but there are some smaller communities that will be using it.” said Adam Palmer, Vancouver Police Chief and President of the Canadian Association of Chiefs of Police, at a press conference on Monday. “We don’t have an exact number... People will have to do what’s right for their particular jurisdictions and departments.” 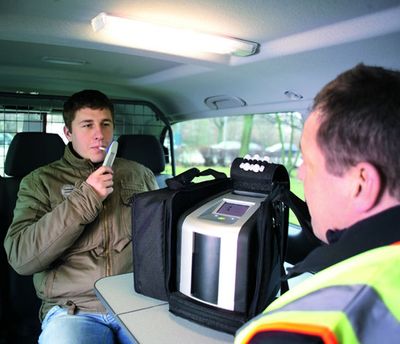 Above, the Draeger DrugTest 5000 being used, image via

The jury is still out on whether high driving actually increases the risk of accidents. A study published in the February issue of the Frontiers in Pharmacology Journal found that there’s no significant link between stoned drivers and motor vehicle accidents. But according to researchers, these results were complicated by the fact that "a positive test for cannabis (i.e. blood) does not necessarily imply that drivers were impaired, as THC/metabolites might be detected in blood a long time after impairment, especially in chronic cannabis users, which could also induce an important bias in the analysis of the results.”

In other words, THC is a lipophilic compound, meaning it is quickly absorbed into fat cells where it can be stored long after the high has worn off, increasing the risk of false positives from blood and saliva testing.

According to Draeger, the DrugTest 5000 is 98.7 percent accurate in screening for THC, but opponents argue that the presence of psychoactive compounds in the blood stream doesn’t necessarily correlate to being high.

“There will be people who are not impaired at five nanograms [of THC per 100 millilitres of blood],” Mark Asbridge, associate professor in Dalhousie University’s Department of Community Health and Epidemiology, recently told The Globe and Mail. “There will be others who are impaired at two nanograms or less.”

According to Vancouver-based criminal lawyer Kyla Lee, “The government is creating per se limits for drug concentration, so if you have a certain amount in your body, you’re considered to be impaired regardless of whether or not you’re actually impaired.” She added in a phone call with MERRY JANE that it will “be a challenge for medical users who need cannabis in order to be stable, to be well, or to be able to operate a motor vehicle. Those people could be found guilty of committing a criminal offense for doing something that is medically suggested.” 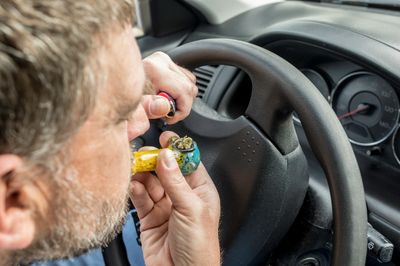 While police forces wait patiently for alternative saliva-based drug tests to be approved by the Attorney General, some Canadian entrepreneurs are exploring entirely different drug testing methods. At the University of Waterloo, a group of students have created Guard-Ex, a VR-like headset that records eye movements, pupil dilation, heart rate, body temperature, and blood pressure to determine whether someone is on drugs.

“Roadside saliva tests don't tell you how high you are; they just tell you how many chemicals are in your body,” said Dastiger Khan, CEO of Guard-Ex. “There's alcohol that goes into your bloodstream, that's one thing, but the feeling you get from [from drinking], how your body changes, or how your temperature changes — that’s how you measure the effects.”

Though potentially effective, drug tests like Guard-Ex portend a not-so-distant dystopian future wherein law enforcement have the authority to not only surveil your physical actions, but also your physiological state. More nefarious, however, is the way in which current saliva screening systems like the Draeger DrugTest normalize the process of DNA collection by law enforcement officials prior to arrests. “There's no [legal] restriction on what the police can do with [your saliva] sample once it’s been collected,” says Lee, the criminal lawyer. “Those samples are viable for four hours. That’s a long period of time that police have carte blanche to take your DNA.” 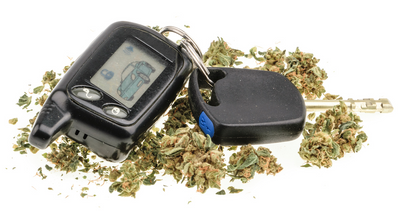 In lieu of adopting the Draeger DrugTest, local police departments in major cities across Canada are using the C$161 million dollars pledged by the Liberal government for federal and provincial law enforcement training and drug testing to train more Drug Recognition Experts (DREs). Unlike roadside Standardized Field Sobriety Tests (SFSTs), which include breathalyzers and basic sobriety tests like touching your nose or walking in a straight line, 12-step Drug Recognition Evaluations include a 40-minute series of complex cognitive and physiological tests given at police stations by DREs to determine whether or not an arrestee is on drugs.

DRE certification requires a 10 day in-class course followed by 3-5 days of on-the-ground training given in American, or less commonly, RCMP-run programs certified by the International Association of Chiefs of Police (IACP). According to RCMP Sgt. Ray Moos, roughly 20 to 24 students in each class don’t pass. “It is a challenging course,” Moos told The Star. “Officers have to be competent with knowing a lot of different drugs and what category of drugs those drugs would fall under, and how those drugs affect the body.”

DREs, similar to the Draeger DrugTest 5000, are meant to speed up the conviction process and reduce legal challenges to drugged driving charges. But according to the Canadian Association of Chiefs of Police, there are currently only 833 trained DREs across the country (a small number compared to the 13,000 officers trained in SFSTs).

What’s more, as stated in a report by CBC’s The Fifth Estate, evaluations undertaken by DREs “can lead to false arrests, are prone to police bias, and, according to one scientific expert, are no better at detecting drug-impaired drivers than ‘flipping a coin.’” 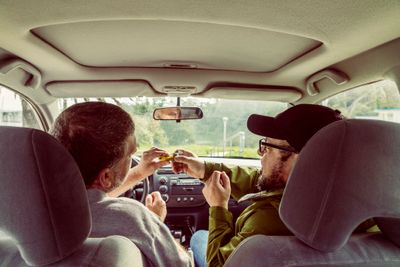 According to criminal lawyer Kyla Lee, Drug Recognition Evaluations are also biased against those who speak English as a second language. “There's a lot of nuance that goes into the directions [given during SFSTs and DREs],” says Lee. “The point of the nuance is to see if people are capable of completing complex divided attention tasks. But if you don't have people who understand the nuance of the language, it's going to lead to performing poorly on the test and people in minority communities being disproportionately charged for these offenses.”

New driving under the influence charges regulated by flawed testing methods and sub-par technology are just some of the many ways that cannabis can be re-criminalized under a legal framework. Still, it might not be the worst thing that it’s illegal to toke and drive. “Some people may think driving under the influence of cannabis is not risky. They say drivers on cannabis are more cautious and drive slower,” said Tracey Crawford, Western Regional Manager of MADD Canada. “But studies show that cannabis can have a negative effect on driving… [It] can reduce concentration and attention span, slow reaction time, and alter perception of time and distance.”

MADD Canada is taking steps to educate the public about the risks of drugged driving  with TV advertisements and school programs like Weed Out The Risk. “We can all help ensure safety on our roads and highways,” Crawford told MERRY JANE. “Never drive high or ride with a driver who has been consuming. We just want people to be safe.”

LEGALIZATION
SAFETY
CRIME
CANADA
MORE...
Taylore Scarabelli
FOLLOW
Taylore Scarabelli is a New York-based writer who has written for Dazed, Real Life, Topical Cream, Under the Influence, and Vestoj, among others. You can find her on Twitter @taylore_moon
Share this article with your friends!
AD
By using our site you agree to our use of cookies to deliver a better experience.
Accept
Decline
MORE FROM MERRY JANE