NEWS
Panic Buying May Not Save the Weed Industry, After All
AD
While the legal marijuana industry was recently riding high on record-breaking sales amid the coronavirus pandemic, the reality may end up being much more sobering.
Published on March 27, 2020

The regulated marijuana industry recently experienced record-breaking sales while everyone stocked up weed, but the heady hoarding triggered by COVID-19 lockdowns may not be enough to save pot businesses from a potential economic recession.

Already, sales figures have slumped back down to their typical year-over-year numbers in some weed-legal states. According to data from the weed analytics firm Headset, sales spiked from March 15-16, just as the US began to (rightfully) freak out over the coronavirus pandemic. Sales then rapidly declined from March 17-19, with a slight uptick in sales on March 20, a Friday.

“The response might mark a natural decline after consumers stocked up before sheltering in place,” wrote Maggie Cowee at MJBizDaily regarding last week’s figures, “or it could be the result of economic pressures from the pandemic, which has resulted in the closure of restaurants, gyms, ski resorts, and scores of other businesses, as well as the loss of thousands of jobs.”

However, this week, sales surged again, particularly in Denver, Colorado. On Monday, March 23, pot shops across the state sold 60 percent more weed compared to the average Monday. Meanwhile, in Denver, marijuana retailers sold a whopping 119 percent more than the average Monday, due to Mayor Hancock’s initial plan to close all recreational pot shops on Tuesday until April 10. The panicked rush to stock up on weed in Denver led to a potential public health catastrophe as residents formed block-long, packed lines outside of marijuana stores, violating social distancing policies and possibly spreading the coronavirus to hundreds if not thousands of people.

So, certainly, people are buying tons of weed right now as they’re forced to stay at home and binge on Netflix, but that may not be enough to keep pot shops in business.

For starters, the federal government will not lend emergency loans or other forms of relief to marijuana businesses. Although regulated companies may hold state licenses, the US government classifies weed as a Schedule I drug, and the feds won’t fund an industry they consider illegal. 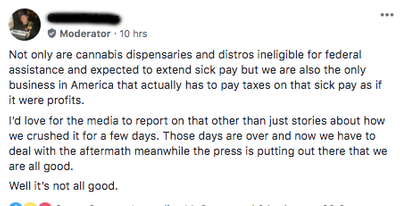 The US Congress just passed a landmark emergency relief bill worth at least $2 trillion (some estimates say it’s actually worth as much as $6 trillion) which will send $1,200 checks to qualifying American citizens and give out massive loans to keep businesses afloat. But since marijuana remains federally outlawed, pot companies won’t get a dime from federal loans or credit lines, and will have to rely on locals buying their products to stay in business.

It’s that last part, restrictions to only local purchases, that threatens the nascent cannabis industry. Although there’s no solid data on how much money the weed industry receives from tourist sales, tourists make up a substantial portion of any given state’s reefer revenues. Now that the global tourism industry is practically on pause with lockdowns, travel bans, and other extreme measures implemented to prevent the spread of COVID-19, tourists’ money won’t be flowing into cannabis coffers any time soon. And since state-licensed marijuana can’t be shipped across state lines, that means all sales must be done in-state.

Furthermore, the weed supply lines may soon go dry if authorities can’t get the pandemic under control. According to Headset’s data, California, Washington, Alberta, and British Columbia’s marijuana week-to-week supplies are falling below pre-COVID-19 levels, from having about five-weeks worth of supply to only four-weeks worth of supply, on average.

Only Nevada’s supplies have increased, from seven-weeks worth pre-COVID-19 to over 13-weeks worth as of this week, likely because the bulk of the Battle Born State’s weed purchases come from tourists. Analysts believe that two out of every three legal weed purchases in Nevada are made by tourists.

Canada may not fare well, either. Although the Great White North is providing federal emergency assistance to the nation’s businesses, Canada’s marijuana cultivators and retailers may not get to tap into those funds, even though cannabis is federally legal and recognized as a government-approved medicine. The coronavirus has caused delivery delays and the closures of some production facilities and shops across the nation.

There’s hope in Canada, though. Weed sales have surged there just as they have in the US, and the recent rollout of Cannabis 2.0, which introduced marijuana-infused edibles and drinks to Canada’s legal markets, could help boost sales — as cannabis consumers begin to avoid smokable forms of cannabis (since smoking could exacerbate COVID-19).

So, for right now, the regulated cannabis industry is making a killing, overall. But these sales surges may prove to be temporary, especially now that the US has more confirmed coronavirus cases than any other country on the planet — including China, where the first COVID-19 outbreak occurred.

The federal government may not provide help to one of the nation’s fastest growing industries, but state governments could. Though, so far, no state governments have proposed any emergency relief packages for licensed marijuana businesses.

Fingers crossed that weed truly is a recession-proof market, and that any obstacles that the industry encounters in the coming weeks (or months) can be overcome by its “essential” or “critical” status. And fingers crossed on the other hand that the federal government’s historic bailout package saves the country from a recession (or worse, a depression). If you’re one of the folks who qualified for that $1,200 government check today, consider budgeting some of that for your local pot shop. They’re gonna need it.

NEWS
DISPENSARIES
CANADA
INDUSTRY
MORE...
Randy Robinson
FOLLOW
Based in Denver, Randy studied cannabinoid science while getting a degree in molecular biology at the University of Colorado. When not writing about cannabis, science, politics, or LGBT issues, they can be found exploring nature somewhere in the Rocky Mountains. Catch Randy on Twitter and Instagram @randieseljay
Share this article with your friends!
AD
By using our site you agree to our use of cookies to deliver a better experience.
Accept
Decline
MORE FROM MERRY JANE