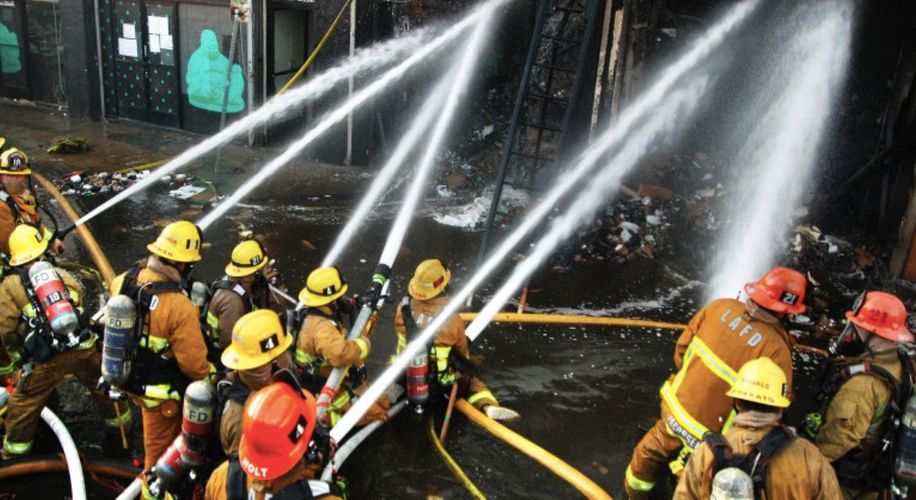 After the fires at the SmokeTokes weed oil factory and surrounding buildings finally simmered down, authorities launched a criminal investigation into the incident.

After the fires at the SmokeTokes weed oil factory and surrounding buildings finally simmered down, authorities launched a criminal investigation into the incident.

A hash oil explosion in downtown LA on Saturday evening injured several firefighters, caught fire to surrounding buildings, and prompted a criminal investigation led by the LAPD and the US Bureau of Alcohol, Tobacco, and Firearms (ATF).

The fire began at a SmokeTokes butane extraction facility at 327 East Boyd St. in the city’s Toy District. First responders initially thought they were battling a routine fire. As firefighters spread throughout the building and climbed to the roof to put out the flames, one of them felt unusual amounts of heat and pressure coming from the rear of the building. Shortly after he warned everyone to clear out, an explosion rocked the entire block around 6:30 PM, blasting pillars of flame that reached 30-feet-high.

Some firefighters on the roof caught fire as they leapt through the flames and slid down an immolated ladder. They discarded their charred coats and melted helmets on the sidewalks. Altogether, nearly a dozen firefighters sustained burn injuries, and three were taken to the hospital. All survived and are expected to fully recover.

According to an LAFD tweet, over 230 firefighters responded to the hash oil explosion, which spread to surrounding buildings.

“Things could have been so much worse,” said Los Angeles Fire Department Medical Director Dr. Marc Eckstein, the LAFD Medical Director who treated some of the injured responders, told The Morning Call.

Although hash oil fires aren’t new, the latest explosion’s proximity to downtown LA, as well as the sheer magnitude of its destruction, led to a public statement from the mayor.

“Tonight, 11 LAFD firefighters were injured battling a blaze in downtown LA,” Mayor Eric Garcetti tweeted. “All of them are being treated for their injuries and in stable condition at this time. Our hearts go out to their loved ones and fellow first responders. We are keeping them in our prayers.”

Tonight, 11 @LAFD firefighters were injured battling a blaze in downtown L.A. All of them are being treated for their injuries and in stable condition at this time. Our hearts go out to their loved ones and fellow first responders. We are keeping them in our prayers. pic.twitter.com/RRoUNPgLBt

On Sunday, local and federal authorities announced that they launched a criminal investigation into the fire to determine whether arson was responsible. The investigation, which includes the LAPD and the ATF, does not mean that any wrongdoing occurred, it only indicates that the cops are looking into it.

Hash oil is a marijuana concentrate extracted with volatile hydrocarbon gases such as butane and propane. The production process is safe so long as the equipment and facility are properly maintained and meet safety standards. But if the gases used in the extraction build up in a facility’s airspace, a single spark can create fires or explosions that can be difficult to contain.

Hash oil, once filtered and refined, is sold in vape pen cartridges or as dabbable products. The oil can also be infused into marijuana edibles, too.