CULTURE
What Exactly Is Hash Oil and How Do You Consume It?
AD
Welcome to the weird, potent world of cannabis concentrates.
Published on August 22, 2019

In the modern-day world, we have a myriad of choices when it comes to our method of cannabis consumption. While for some, nothing will top the simple pleasures of a hand-rolled joint. But for those who like to experiment, the number of compelling alternatives seems to grow by the day.

Though cannabis flower and edibles were the original twin pillars of consumption, we are now able to ingest cannabis through balms, tinctures, drinkables, supplements, patches, and more. One of the most popular avenues for consumption is hash oil, which can be smoked, vaporized, eaten, or applied topically, depending on what type of hash oil you’re sitting on. Let’s dive in and explain what makes this potent and delectable form of cannabis so damn special. 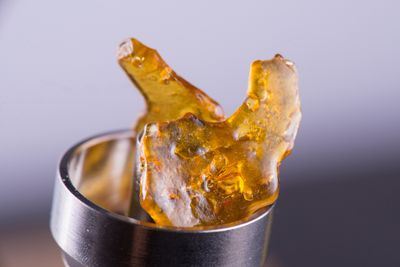 What Is Hash Oil Exactly?

Given it has almost as many nicknames as ‘420’ has origin stories, it's easy to get confused when it comes what hash oil actually means.

Historically speaking, hashish use stretches back centuries, though the precise origin is unknown. Many believe it was first created in Central Asia, as ancient Persians, Arabs, and Indians all consumed hashish for generations. In that sense, hash oil isn’t new at all, but current developments in solvent-based cannabis extraction have changed the game completely.

Terms like shatter, wax, and BHO are not interchangeable, but they all refer to a form of marijuana concentrate. Shatter is brittle and can literally be broken apart into small pieces. Wax (sometimes also known as butter) is much softer and malleable. BHO — which stands for either butane honey oil or butane hash oil — has almost a syrup-like consistency.

Think of it this way: All cannabis “extracts” are considered concentrates, but not all concentrates are extracts. BHO is both an extract and a concentrate, whereas old school hashish (in brick form) is a concentrate, but not an extract. For the sake of this article, when we refer to "hash oil," we're describing any concentrate or extract that's in liquid/semi-viscous form.

How Is Hash Oil Made?

When it comes to hash oil extraction, there are several established methods available. Each one results in the trichomes of the cannabis plant (where the terpenes and cannabinoids are stored) being separated from the rest of the material and then consumed. As far as which extraction processes are most commonly utilized, there are a few that are considered the most tried-and-true approaches.

Alcohol Extraction:
This process involves soaking cannabis in alcohol (many use ethanol). The alcohol strips the trichomes from the plant before the liquid is then filtered. Once the alcohol is removed (usually through evaporation), the resulting formula can be consumed as a tincture or rendered into oil.

CO² Extraction:
With CO² extraction, carbon dioxide is used in place of a solvent. Heat and high pressure combine to turn the CO² “supercritical,” which in turn allows for extraction to occur. CO² extraction is a far more elaborate and costly method than using solvents, but it is generally regarded as a superior option for being less wasteful and producing purer results. This is also the only method where technicians can efficiently separate THC, other cannabinoids, and terpenes from one another.

Butane/Propane Extraction:
The genesis of BHO is created by pressurizing cannabis and liquid butane in a heated, sealed environment. The resulting vacuum that’s created will evaporate the butane etc. This is the method used to produce shatter, which again is simply hash oil in a different state.

Other Methods:
Of course, there are also far more practical extraction options available, too. By simply using a grinder with a kief catcher, you’ll eventually collect a sizeable amount of kief (which is essentially powdered trichomes). This can be rolled into a ball of hash, often called charas. When it comes to hash oil, however, the alcohol process is about as simple as it gets.

Given the nature of the processes described above, it’s also important to emphasize that hash is often a far more potent substance than cannabis flower, and should thus be enjoyed with appropriate caution. With the understanding that hash oil is not for beginners, let’s cover the basics of consumption. 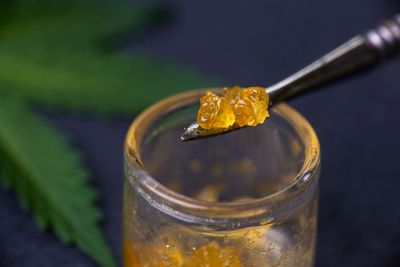 How Do I Consume Hash Oil?

Here’s the fun part! Once you have your hash oil, it’s time to decide how best to consume it. For simplicity’s sake, we’ll focus on BHO and actual oils as opposed to shatter or wax for this section.

Nowadays, dispensary shelves are stocked with disposable vaporizer pens, as well as cartridges for reusable models. In both cases, the pens or vaporizers heat the hash oil to a predetermined (or, in some cases, customizable) temperature to achieve combustion. All you have to do is inhale and enjoy.

There are also oil cartridges and vaporizers that can either be refilled or are intended for use with raw oil. Should you decide to explore the economic benefits of making your own hash oil, refilling your own cartridges or consuming your oil directly through a compatible device is without question the most wallet-friendly way to go.

Naturally, you can dab marijuana concentrates and hash oil — a process we’ve detailed here and here. 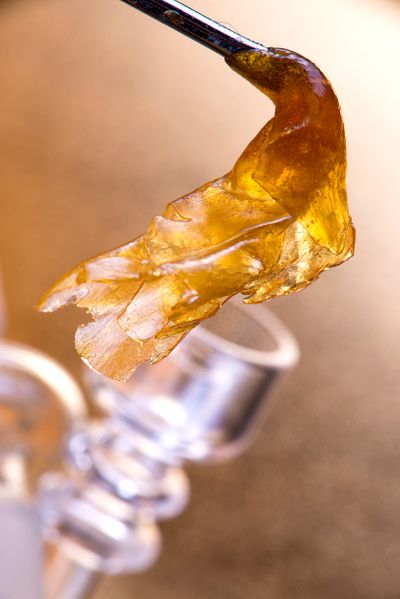 If you don’t wish to consume your oil directly, it can also be employed as the active ingredient in edibles or in any manner of topicals, tinctures, etc. (assuming it’s been decarboxylated). If you do decide to go the edibles route, be absolutely certain that you’ve removed all traces of any reagent used in your extraction process. Many also suggest removing the chlorophyll from oil before consuming it in any form, as it can tend to result in a lamentable and bitter taste.

HASH
CONCENTRATE
EXTRACTS
CONCENTRATES
MORE...
Zack Ruskin
FOLLOW
Zack Ruskin is a cannabis and culture journalist living in San Francisco. Follow him on Twitter: @zackruskin.
Share this article with your friends!
AD
By using our site you agree to our use of cookies to deliver a better experience.
Accept
Decline
MORE FROM MERRY JANE