HEALTH
Why the Cannabis Industry Needs to Stop Demonizing Antidepressants
AD
“Plants over pills,” a phrase echoed throughout the cannabis industry, may sound like a harmless slogan. But for those who are struggling with mental health, it can have seriously damaging effects.
Published on May 16, 2019

I remember the year I “managed” my mental health with marijuana. I was 18-years-old with a diverse set of hobbies: working out two hours a day, crying so hard my body ached, and disassembling razor blades, to name a few. After a panic attack landed me in the hospital, I was treated to my first-ever psychiatric diagnosis (generalized anxiety and major depressive disorder, thank you very much) and a prescription for Zoloft. To be honest, I hated Zoloft. But I have no doubt that it saved my life.

Nearly a decade later, I manage my depression and anxiety with a combination of therapy, antidepressants, and cannabis. Of the three, I’m most inclined to preach about the healing effects of cannabis: as a mood elevator, or an antidote to certain types of anxiety, its effect on me is unparalleled — with one caveat. I don’t feel those benefits unless I’m taking an antidepressant, too. I wish it didn’t feel like a personal failure to need medication to manage my depression. But more importantly: I wish the cannabis industry would stop echoing that sentiment.

Recently trademarked by trendy cannabis vaporizer company dosist, the phrase “plants over pills” has become a staple in the cannabis community, where enthusiasts and cannabis publications alike use it to bash the safety and efficacy of prescribed medication. A 2017 High Times article titled “10 Reasons Pot Is Better Than Prescription Drugs” lays out the community’s viewpoint clearly: “[I]t’s not simply a matter of MMJ being superior to Rx, which it most certainly is; it’s the sheer scope of dominance that the healing herb has over deadly and addictive medications that is so mind-blowing.”

If anything, this is a conservative take: a 2018 piece by MarijuanaBreak warned that prescribed medications — specifically antidepressants — “could actually cause you to unravel mentally” and “do nothing to help you in the long-term.”

Of course, it’s not the aim of every “plants over pills” proponent to frighten and condemn those who use prescription medication — even if that’s ultimately the result. David Hebron, CEO and co-founder of cannabis education platform BLNCD Lifestyle, became an advocate for plant-based treatment after witnessing his father’s struggles with addiction.

“He would go to a doctor for back pain or for mental stress and was being given Adderall and painkillers,” Hebron says. “It turned into a habit that just took over. [It was] more than a habit, it became a dependency that ultimately took his life before he was 40.”

From that perspective, it’s easy to understand the enthusiasm for plant-based alternatives, and the accompanying ire for under-regulated and over-prescribed pharmaceuticals. But other justifications for supporting the “plants over pills” movement are harder to swallow. I spoke with the owner of the dabndraw Instagram account, a frequent user of the #plantsoverpills tag. She frames her support like this: “[OTC and prescription medication] mostly serves as a band-aid for something that needs to be addressed on a deeper level. It gives us that immediate effect of relief without really getting to the bottom of the issue.”

The notion of medication — particularly psychiatric medication — as a shallow fix is nothing new, but it’s particularly hurtful to hear it echoed in the cannabis community — a group of people who pride themselves on openness, acceptance, and no judgment. Per Maria Yagoda’s 2018 essay for Vice, “the pervasive idea that medication is an easy out or a superficial BandAid” is just another facet of the “routine resistance” to medical treatment for mental illness.

Typically, however, that resistance comes from parties who believe mental health shouldn’t be treated at all — not those who are trying to convince you to replace one substance with another. The cannabis community is accustomed to having its own substance use unfairly demonized: Why, then, is it so quick to turn around and demonize another treatment in the same way? 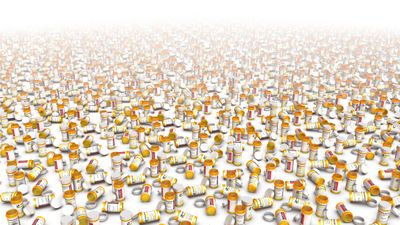 According to Hebron, this kind of all-or-nothing thinking is a product of cannabis’s precarious legal position. “We’re not going to be able to really look at this with an objective point of view until both cannabis and pharmaceuticals are on the same legal platform and same legal status,” he admits. In other words: it’s a war between cannabis and pharmaceuticals, and if extreme rhetoric is required for the message to land, so be it.

Dr. Peter Grinspoon, a primary care physician and board member of Doctors For Cannabis Regulation, doesn’t disagree. A self-described cannabis activist, as well as the son of famed activist Lester Grinspoon, Dr. Grinspoon thinks the “plants over pills” movement is a response, in part, to Big Pharma’s campaign against marijuana legalization. Big Pharma, Dr. Grinspoon contends, “donates to every single one of the initiatives on the side of not legalizing medical or recreational cannabis,” and continues to make “ads about how dangerous cannabis is.” So, maybe “plants over pills” is a counterattack — but does that make it okay to attack the health decisions of others?

When it comes to mental health medication, I’m still inclined to say no. As of 2019, only New Jersey and Ohio include anxiety as a qualifying condition for medical marijuana — while conditions like depression, bipolar disorder, or borderline personality disorder don’t appear at all. (Ohio recently considered adding depression to its list of qualifying conditions, but ultimately decided against it.) At this point in time, there simply isn’t sufficient data supporting MMJ’s efficacy for psychiatric disorders outside of PTSD — a point Dr. Grinspoon finds frustrating, but one that guides his medical decisions nonetheless.

“We know that Prozac works and we know what it does do and what it doesn’t do,” he says. “[T]hat isn’t the case for [medical marijuana and] depression.”

The worst-case scenario for physicians isn’t that cannabis may be ineffective: it’s that the plant can cause serious harm. “If someone’s really suicidal, and has had suicide attempts, and has major depressive disorder,” Dr. Grinspoon says, “I’d be really careful experimenting with cannabis.”

Dr. Kenneth Weinberg, a physician with Cannabis Doctors of New York, echoes this caution, particularly for patients with a history of psychotic tendencies or bipolar disorder. He recalls prescribing medical marijuana for a patient suffering from back pain, who failed to disclose his past bipolar diagnosis. The patient “started escalating his THC dose,” Dr. Weinberg shares, “and he wound up having a big problem.”

When questioned further, Dr. Weinberg clarified that the THC triggered a manic episode. “I try to be as scrupulous as possible about people who are bipolar,” he adds. “I think definitely there’s an interaction there [with THC and mania].” (Note, this doesn't imply that cannabis causes mania or psychosis, but rather the plant can exacerbate pre-existing mental health conditions.) 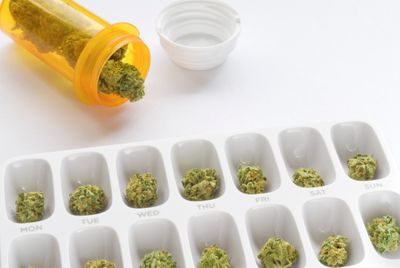 Xana Turner-Owens, a photographer living in Cambridge, MA, can speak firsthand to that interaction. Although she first started smoking weed in college, she’s been “medicated since early childhood” for ADD, and has also taken antidepressants and antipsychotics — the latter prescribed after a “break with reality” she suffered in her early 20’s. She admits that continuing to smoke weed exacerbated her mania, but she wasn’t in a place to responsibly curb her use at the time.

“When I first experienced mania, I kept smoking as a means of proving to myself that I wasn't actually crazy,” she recalls. “Or maybe it helped me to think that I could just blame it on the weed.”

Even though Turner-Owens’ manic and depressive episodes were ultimately labeled as symptoms of her PTSD — a qualifying condition for medical marijuana in 26 states — weed hurt her more than it helped. And although she still enjoys smoking weed as part of her mental health regimen today, the 27-year-old thinks it’s “dangerous to equate the use of marijuana and the use of medication.” In her experience, while marijuana may be “the easiest and most fun” way to experience symptom relief, she can’t in good conscience recommend marijuana as an equally effective treatment for every mental health issue.

None of this is to say marijuana can’t treat additional mental health conditions. But right now, we simply don’t know enough about the impact of cannabis on those conditions to say with any certainty. Patient testimony continues to go both ways, as evidenced by Turner-Owens’ and my differing experiences, and Dr. Grinspoon and Dr. Weinberg's patients’ opposing reports.

Given that knowledge, it’s irresponsible for the cannabis industry to continue touting the plant as a superior cure-all alternative to psychiatric medication. “Plants over pills” is not an appropriate slogan — yet — when it comes to treating anxiety, depression, or bipolar disorder, and the cannabis industry is harming people by pretending that it is.

Yes, we do know that a huge percentage of cannabis consumers are using the plant to treat mood disorders — what we don’t know is how many of those users are also taking prescribed antidepressants, antipsychotics, or other similar medications. At best, the cannabis community’s dogmatic insistence that prescription meds are harmful to our health will alienate those who need them. At worst, that rhetoric may convince people to stop taking legitimately helpful medication with no guarantee that marijuana will be a successful alternative.

Believe me: people taking antidepressants would love to replace their prescriptions with natural alternatives. We’re well aware of the side effects, the difficulty of tapering off, and all the areas where medications fall short. I take antidepressants anyway because I tried other options, and they weren’t enough. That’s not something I need to be shamed for by the cannabis community, which prides itself on taking an evolved approach to medicine. If the industry really wants to revolutionize the medical landscape, it must put patients’ needs over selling product. And the way to do that is by admitting that “plants over pills” doesn’t apply to everyone, including people like me.

HEALTH
CULTURE
OP-ED
BIG PHARMA
MORE...
Louisa Ballhaus
FOLLOW
Louisa is an NYC-based writer covering TV, vanity, mental health, and more. Find her writing on Betches, Bustle, SheKnows, and Free State Review, or follow her on Twitter @louisabhaus.
Share this article with your friends!
AD
By using our site you agree to our use of cookies to deliver a better experience.
Accept
Decline
MORE FROM MERRY JANE