CULTURE
What Exactly Is a "Zip" of Weed? And How Much Pot Is That?
AD
What does a "zip of pot" mean? And what are the roots of the reefer slang? We've got all the answers, fellow tokers.
Published on February 20, 2019

When I was a teenager, I remember texting a classic high school dealer, asking if he was “around to chill.” This dude was the archetypal suburban nug slanger, who drove a janky used Honda with a custom spoiler that was worth as much as the actual car. You know, the type who’d force you to watch him feed his pet lizard whenever you rolled over to his mom’s crib to pick up mids.

Rather than reply with something vague or cryptic, as he usual did, the pot dealer texted back something like: “Ay bro, got two kind zips from my plug in Mendo. Serious headies.” This was during the flip-phone era, so there were no emojis, but he might as well have added five-to-ten fire symbols.

A relative novice to weed at the time, I had no clue what the hell this dude was saying. “Two kind zips”? Was it code or slang? Was he trying to tell me his stash was stolen and now he had zip, as in “zilch” left? Was this causing him a serious headache — thus the "serious headies"? What the hell was a “zip” of weed?

Now, well over a decade later, this dealer’s text makes perfect sense. Apparently, I just wasn’t yet fluent in dealerese. Still, the term isn’t really common parlance, and you shouldn’t feel bad for not knowing the definition of a “zip.” And, as always, MERRY JANE is here to bloom your brain and educate you in all things grass. Let’s dig into the roots of this reefer term.

A zip of weed refers to an ounce of cannabis, typically in the form of flower. An ounce equals just over 28 grams. In case you forgot, an eighth — or a “slice” — refers to an eighth of an ounce, or 3.5 grams of weed. So a zip is also eight eighths of an ounce, like a full pizza, whereas an eighth is like one slice of the whole pie / the whole zip. 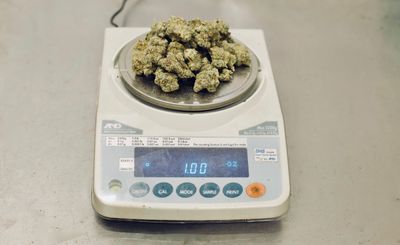 To get more granular, most pre-rolled joints in legal markets contain about a half gram of flower. So a zip of weed equals about 56 joints. And currently, a zip/ounce of weed goes for about $150-300, depending on the quality of the cannabis and where you’re buying it from.

Where did the name come from? There’s no definitive answer about who coined the slang, but its origins likely relate to some mundane logic. An ounce is abbreviated as an “oz,” and you can usually fit a full 28 grams into one of those large Ziploc bags your parents use to freeze peas or fruit inside. So take the z from both “oz” and “Ziploc” — and there you go: A zip of weed.

Pretty simple, no? To add some pop culture to our lesson in semantics, here are some tunes where the artists reference a zip:

“Dippin’ away, time keeps slippin’ away / Zip in the safe, flippin’ for pay / Tippin’ like I’m drippin’ in paint / Up front, four blunts, like, Khalifa put the weed in a J”

“Beat that pussy up, I need riot gear / Any volunteers? / Gas in a Ziploc, now that's loud and clear”

And, finally, to decode that text sent from my dealer’s burner, oh so long ago. “Ay bro, got two kind zips from my plug in Mendo. Serious headies.”

This means he’s got two ounces of kind bud — meaning top-shelf flower — that his supplier in Mendocino, California sent him. The weed is seriously strong, or “heady.” So there you go.

Now, if anyone tries to sell you a “zip” and the package contains just a couple buds, you know you’re getting played. Happy smoking y’all!

420
CANNABIS CONSUMPTION
POP CULTURE
DEALING
MORE...
Doug Mann
FOLLOW
Doug Mann writes about cannabis and runs a blog documenting his experiments with "dessert nachos." The arthouse film "Half-Baked" was most likely based on the time he accidentally killed a police officer's horse.
Share this article with your friends!
AD
By using our site you agree to our use of cookies to deliver a better experience.
Accept
Decline
MORE FROM MERRY JANE