CULTURE
Weed 101: How Many Grams Are in an Ounce of Pot?
AD
Here’s what you need to know when it comes to weighing weed.
Published on September 19, 2019

Here’s a familiar scenario: You’re in high school and you’re at a dealer’s house. You watch as they put nugs on a tiny scale that’s (suspiciously) not facing you until they’re satisfied with the reading. They tell you they’ve weighed a “monster sack” and you leave stoned and happy.  It’s only later that your friends make fun of you as they explain that 3 grams is not the makings of a generous eighth.

Look, we understand. Math isn’t everyone’s thing. Some of us probably see cannabis consumption as an excellent opportunity to forget about math entirely for a bit, but the truth is that a rudimentary understanding of the weight system used to sell pot — first illegally, now from licensed retailers — is fundamental to a satisfactory shopping experience.

Sure, those of us fortunate to live in an area with a regulated cannabis market may not be subject to small-time dealers tweaking the settings on their scale (it happens) or padding the volume of their product with seeds, sticks, and stems (the worst). But as with all forms of industry, vigilance and awareness on the customer’s part is always a wise approach to embrace.

With that in mind, here are the numbers you need to know when it comes to grams.

How Many Grams Are in an Ounce?

First we need to define what a gram is. According to our friends at Merriam-Webster, a gram is “a metric unit of mass equal to ¹/₁₀₀₀ kilogram.” In terms of weight, grams are the building blocks for personal use cannabis purchases, while wholesale often works in ounces, pounds, or kilos. In fact, sixteen ounces equates to one pound, but how many grams is that? 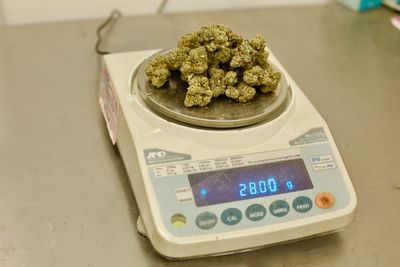 Most of us have probably come to accept the less cumbersome version of this figure: 28 grams. If we stick with 28 grams, it’s an easy entry point to understanding most of the major weight options you’ll find at your neighborhood dispensary. The phrases we’ve likely all encountered — an eighth, a quarter etc. — are all missing the parenthetical “of an ounce” afterward.

If we accept an ounce as the standard measurement for cannabis, then the rest of these quantities can be measured as fractions of 28 grams. 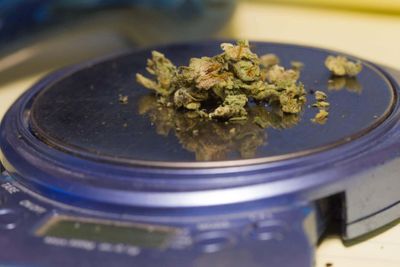 Ah, now we’ve arrived at the more nefarious slang end of the spectrum. As MERRY JANE has previously noted, a “zip” is an ounce of cannabis while a “dub” or “dubsack” is not a gram by definition but instead simply $20 worth of weed.

In general, it’s best to try and purchase cannabis in grams, eighths, or ounces to avoid defining quantities by non-empirical terms. 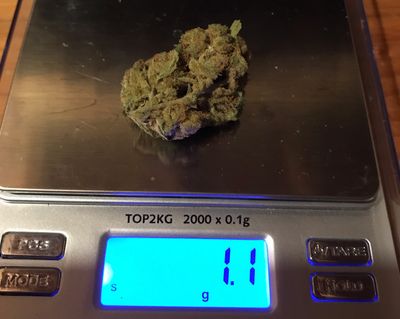 The regulatory agencies in charge of the cannabis industry on a state-by-state level have not had much time — and very few resources — to be entirely relied upon when it comes to inspecting that listed weights are indeed accurate.

If you’re buying raw flower, make sure your budtender weighs it out in front of you. If you’re buying prepackaged cannabis, don’t feel bad about verifying the weight when you get home — just make sure you account for the jar/package itself! If the resulting numbers don’t align, let the dispensary know. Thanks to strict regulations, retail operations receive some products already in childproof packaging, so they may not be aware of the issue, either.

Do you believe yourself to have a jeweler’s eye when it comes to cannabis? If so, just be sure you’ve made peace with the fact that you’re going to get it wrong pretty often. The sheer variety of leaf structure, density, and size means that there’s honestly no reliable way to accurately determine the weight of cannabis by the naked eye alone. It may be a cool party trick, but your wallet will thank you for defaulting to the hard numbers.

DISPENSARIES
EDUCATION
CULTURE
INFORMATIVE
MORE...
Zack Ruskin
FOLLOW
Zack Ruskin is a cannabis and culture journalist living in San Francisco. Follow him on Twitter: @zackruskin.
Share this article with your friends!
AD
By using our site you agree to our use of cookies to deliver a better experience.
Accept
Decline
MORE FROM MERRY JANE