CULTURE
How to Spot Fake Heavy Hitters Vape Cartridges
AD
Heavy Hitters is a legal brand, but the company's vape carts are consistently counterfeited and sold on the black market. So, what exactly do the knock-offs look like?
Published on September 27, 2019

Why should you avoid fake Heavy Hitters’ carts? For one, you have no idea what’s actually in them. Licensed and legit Heavy Hitters’ products must undergo regular lab testing to ensure they’re not loaded with contaminants.

Unlike our other guides on spotting fake TKO, Kingpen, and Stiiizy products, this one for Heavy Hitters won’t provide any smoking-gun clues to look for. That’s because whoever is making fake Heavy Hitters cartridges in China has almost perfectly duplicated the real ones, according to Burt Blaze at Dab Connection. In other words, if you’re looking for tell-tale signs of a fake Heavy Hitters with knock-off CCELL batteries, wrong logos, or errors on the packaging, you’re likely not gonna find them.

The only way to confirm if your Heavy Hitters vapes are real is by checking the company’s map of authorized retailers. These are the only stores that Heavy Hitters says are allowed to carry its products. And if you find them elsewhere, Mammoth Distribution, the company that distributes Heavy Hitters, has a section on its website where consumers can report bootleg versions. According to the Los Angeles Times, the company also hired a former federal prosecutor to help combat the knock-offs. 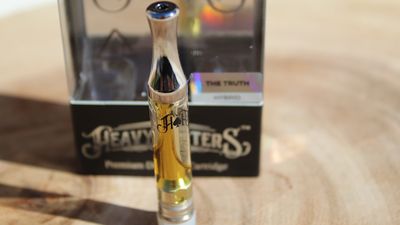 VAPE
SEO
VAPE CARTS
VAPE PENS
MORE...
MERRY JANE Staff
FOLLOW
MERRY JANE is based in Los Angeles, California and is dedicated to elevating the discussion around cannabis culture.
Share this article with your friends!
AD
By using our site you agree to our use of cookies to deliver a better experience.
Accept
Decline
MORE FROM MERRY JANE