CULTURE
How to Spot Fake Kingpen Weed Vape Cartridges
AD
Legitimate Kingpen carts have won numerous awards at cannabis competitions, making them a popular target for bootleggers. So how do you distinguish a counterfeit Kingpen vape from a real one?
Published on September 24, 2019

For many cannabis users, the convenience and simplicity of using a vape pen to medicate or catch a buzz can’t be beat. Top-quality cannabis oils offer a potent and flavorful experience, and vapes have become the preferred method of ingestion for many consumers.

The popularity of cannabis vape cartridges, however, also presents an opportunity for unlicensed and unscrupulous businesses to take advantage of consumers by cutting corners and providing inferior products. Some of these illicit operators also steal the intellectual property of established licensed cannabis brands and piggyback off their success with counterfeit and bootleg products sold on the black market.

Using these phony products can be risky. Unlicensed operators don’t have their raw materials and finished products lab tested for safety, which is a requirement for all legitimate operators in the cannabis space. Untested products can be tainted with a host of unsafe contaminants including heavy metals, bacteria, mold, and other microorganisms and the toxins they produce.

Counterfeit and unlicensed manufacturers will also often dilute the cannabis oils they use with thickeners or other cutting agents in order to stretch out their supplies and maximize profits. But the safety of these additives is not known. In the continuing nationwide rash of lung injuries that have been linked to vaping, taking at least eight lives so far, health officials are narrowing in on the additive vitamin E acetate as a potential cause of the illnesses. Although the product is widely considered safe when used topically or as a supplement, vitamin E acetate may pose health risks when vaporized and inhaled. But health experts, including the CDC, are yet to confirm that vitamin E acetate is even the cause of this illness.

One brand that has seen more than its fair share of counterfeit carts made to look like its products is Kingpen, manufactured by Loudpack, Inc., a licensed cannabis firm in California. Legitimate Kingpen carts have won numerous awards at cannabis competitions, making them a popular target for fakes. The company is upfront and transparent about the issue, acknowledging on its website that “since launching in 2014, Kingpen has been navigating a global counterfeiting issue.”

To help their customers ensure that they were purchasing legitimate Kingpen carts, Loudpack began printing its king’s head logo on the cartridge itself. But this only temporarily kept the company a step ahead of the counterfeiters, who soon began using cartridges with the printed logo, as well. According to a September report in the Los Angeles Times, Kingpen is “investing millions of dollars to redesign its packaging and product security,” and has already sued Chinese companies that manufacture counterfeit packaging.

But until the issue is handled, what’s a cautious cannabis consumer to do? Is there a way to spot fake Kingpen cartridges? Thankfully, the answer is yes. 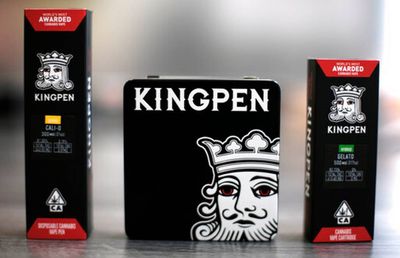 How to Spot Bootleg Kingpens

To help consumers ensure that they are purchasing legitimate Kingpen carts, the company has rolled out an online verification system for its products. Kingpen vape cartridges are now sold in packaging that includes new elements that help ensure consumers that they are buying the real thing, along with a QR code that links to the company’s KPValid verification page online.

The first new security feature now being included on Kingpen carts packaging is a six-digit alphanumeric serial number that is concealed beneath a scratch-off panel. After scanning the QR code with a cellphone or navigating to www.KPValid.com and scratching off the panel to reveal the six digits, the serial number is entered into the appropriate box. Each serial number is only used once, allowing the company to verify that the cart is legitimate through its database.

The new packaging for Kingpen carts has another security feature to help prevent counterfeiting that can be checked without scratching the panel to reveal the serial number, which can help consumers identify fakes in the dispensary before purchase. A holographic label on the cartridge box has hidden text and images that are revealed when the package is rotated. When the box is rotated a quarter-turn to the left, the word “GENUINE” can be read. When the box is turned a quarter-turn to the right, the word “KINGPEN” is revealed. Finally, when the box is rotated a half-turn and viewed upside down, the king’s head logo on the label vanishes.

Above, a real Kingpen vape cartridge

Aside from the new verification features, several other factors should be considered to avoid purchasing fake Kingpen carts. First and foremost, it should be remembered that Loudpack is a licensed California company, and is only authorized to sell its products via state-licensed distributors and dispensaries. Any Kingpen carts that are purchased on the street or outside of California are probably counterfeits of unknown provenance. The company provides a list of authorized Kingpen carts retailers on its website.

At least one victim of the ‘vape lung’ illnesses has told authorities that they had obtained THC oil cartridges from a source who said it had come from a licensed California dispensary. However, the purchase limits enforced at dispensaries and the high taxes assessed on retail cannabis make bulk purchases for resale in another market a costly and unlikely proposition. Such claims should be regarded with skepticism. Again, consumers should only buy licensed cannabis products from licensed dispensaries — otherwise you have no way to ensure what you’re buying is legit.

When it comes to purchasing Kingpen carts — or any cannabis vape cartridge — consumers should remember that, ultimately, their safety is in their hands, and they should take steps to ensure that they are buying legitimate products from a licensed and reputable brand. 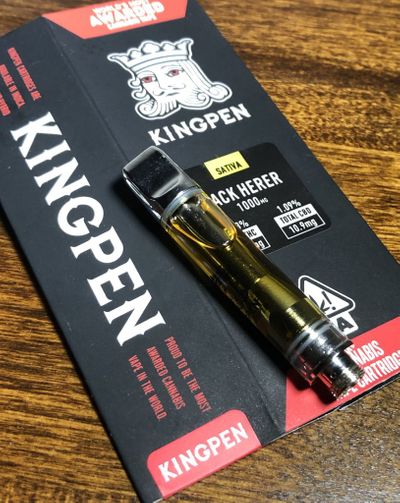 Above, a counterfeit version of a Kingpen vape cartridge

HEALTH
SAFETY
BLACK MARKET
BOOTLEG
MORE...
A.J. Herrington
FOLLOW
A.J. Herrington is a freelance writer focusing on cannabis news, business, and culture and has written for publications including High Times, Sensi, and HEMP. When he's not banging away at the keyboard, you'll probably find him tending to his plants in the garden.
Share this article with your friends!
AD
By using our site you agree to our use of cookies to deliver a better experience.
Accept
Decline
MORE FROM MERRY JANE