CULTURE
Are Star Carts Legit? And How Can You Tell If They're Fake Vapes?
AD
Put down your lightsabers. Star Carts are totally unlicensed, untested, and untrustworthy vape products.
Published on November 1, 2019

Nothing beats a vape buzz that rocket launches you to a galaxy far, far away. Star Carts, a brand of weed vapes that rips everyone’s favorite Star Wars characters: Darth Vader, Obi Wan Kenobi, Yoda, and even Jar-Jar Binks. It may get you intergalactically lifted, but is it worth the risk?

Star Carts are not legit weed vapes, meaning whoever makes them isn’t licensed by a weed-legal state, and the products aren’t lab tested for safety and quality assurance. Given that the CDC suspects that black market vapes — like Star Carts — may be responsible for the vaping-associated pulmonary injury/illness (VAPI) crisis ravaging the US, we recommend avoiding these products. There are plenty of legit, tested vapes available in legal states you could puff on instead.

Anyway, here’s how to tell that Star Carts are fake. 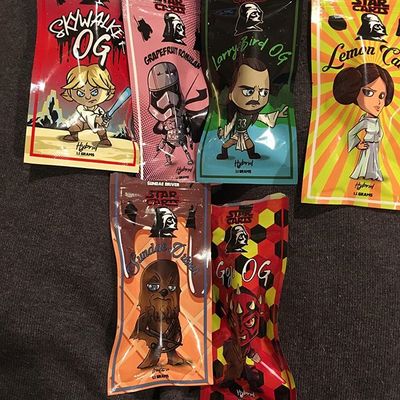 Fake vape brands often copy trademarked images and characters to peddle their wares. Star Carts jacks its logos and cartoon mascots from the Star Wars franchise. Disney owns Star Wars. And there’s no way in hell that Disney is going to partner with a weed company right now, especially given that the company’s theme parks dish out life-long bans on patrons who bring something as benign as pure CBD oil on their properties.

In order to use the Star Wars likenesses and typefaces on its products, whoever makes Star Carts would need permission from Disney. And since Disney hasn’t issued any press releases announcing that it’s jumping into the weed game (and it likely never will), it’s safe to assume Star Carts operates outside of regulations — and the law.

Gallery — Here's What Other Fake Vapes Actually Look Like

Try looking for the Star Carts website. Can’t find one? That’s a huge indicator that they’re a fake weed brand.

Real vape producers all have websites that usually include info for directly contacting the company and, in some cases, a list of all their authorized retail vendors. (However, some fake vape brands have websites, but they usually give away their fake status by lack of transparency — like who owns the company — on said websites.) Star Carts operates from the shadows. If you can’t pinpoint a company behind a vape brand, assume it’s fake. 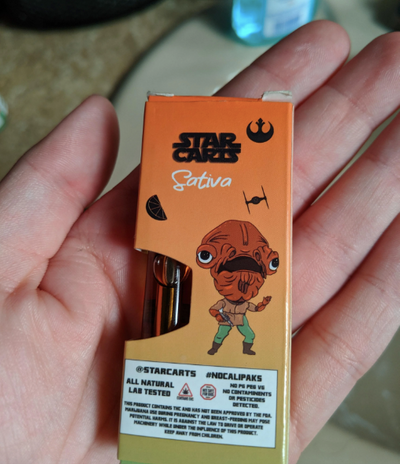 All legit, state-compliant weed products — whether straight-up buds, pre-rolled joints, dabs, or vape cartridges — will always include a sticker with lab data results somewhere on or inside of the packaging. Star Carts packaging doesn’t include lab data likely because none of its products have been subjected to mandatory lab testing to ensure they’re safe for consumption.

If you don’t see lab info, even if it only reports THC and CBD values, that’s a big tip-off that you’re dealing with black market products. 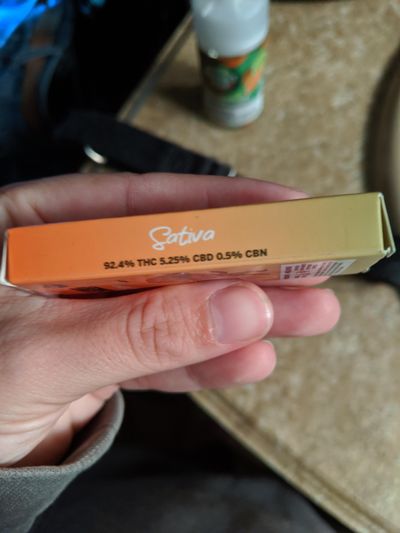 The only content info provided on Star Carts packaging is its cannabinoid content. So, depending on the "source" of your Star Cart, you could see THC content, CBD content, CBN content, or a combonaiton of the three. You know this is fake because legal lab tests come with terpene and sometimes flavinoid info,  too. The name of the lab will also be on the label.

Some Star Carts reports a percentage range, e.g. 85-87 percent THC. This is not how THC content is supposed to be reported. Further, lab data should never be written directly on the packaging. Lab results should come on a sticker, since every batch of product must be separately tested.

Usually, THC values are reported with a solid, single figure, e.g. 85 percent THC or 100mg THC. Some lab info will include an error or uncertainty range, such as +/-15 percent, which is standard for lab stats.

Basically, if you see Star Carts, feel free to appreciate their Star Wars fanboy designs. But understand that if you puff on them, you’ve got no idea what you’re putting inside of your body. If you’re gonna play hard, at least play responsibly, and stick to the legit, lab tested vape products available at your nearest licensed dispensary.

If weed vapes aren’t legally available in your state, consider moving. Just kidding. But you should write to your lawmakers, and, maybe, consider volunteering for a weed legalization lobby to get the laws changed in our area.

THC
BLACK MARKET
LAB TESTING
SEO
MORE...
IN THIS STORY
CBD
Click to shop at our CBD store
MERRY JANE Staff
FOLLOW
MERRY JANE is based in Los Angeles, California and is dedicated to elevating the discussion around cannabis culture.
Share this article with your friends!
AD
By using our site you agree to our use of cookies to deliver a better experience.
Accept
Decline
MORE FROM MERRY JANE