Even as the federal government shutdown enters its third week, state legislators and executives are back at work, and a surprising number of these elected officials have announced that they are fighting to make cannabis reform a priority in 2019.

Lawmakers in New York and New Jersey are hard at work finalizing plans to legalize this year, inspiring many surrounding states to announce their own plans for legalization. The governors of Pennsylvania and Connecticut have recently called on their state legislatures to consider legalizing, and now Rhode Island Governor Gina Raimondo has begrudgingly decided to announce a plan to bring legal pot sales to the Ocean State.

The Northeast is not the only region of the country pushing towards cannabis reform. Seven different Republican-dominated states, from South Carolina to Kentucky, are currently debating bills to legalize medical or recreational marijuana this year. Progress is also continuing on a federal level, where the National Institute of Health (NIH) has announced plans to spend $1.5 million on researching lesser-known cannabinoids and terpenes.

In other news, a popular new book linking cannabis use to a nationwide increase in mental illness and violence is drawing a critical backlash over its alleged use of misleading statistics, and Godfather director Francis Ford Coppola is launching his own brand of weed. Let’s dig into the week in weed news below.

Over the course of the next week, Rhode Island Governor Gina Raimondo is expected to propose a plan to create one of the most tightly-regulated adult use cannabis markets that the country has ever seen. This weekend, Raimondo indicated that her new budget plan for the state's next fiscal year will include tax revenue from legal weed sales. The plan will allocate around $3.5 million to get the retail market up and running, and will establish a 17% pot sales tax that is expected to bring the state over $14 million by the end of 2020.

Raimondo has long opposed any attempt to bring legal weed to the Ocean State, but now that Massachusetts has legalized adult use, and New York and New Jersey are working hard to do the same, she has recognized the inevitability of legalization. "I will say, I do this with reluctance," she said to The Providence Journal. "I have resisted this for the four years I've been governor... Now, however, things have changed, mainly because all of our neighbors are moving forward" with legalization plans.

The state's legislative leaders greeted Raimondo's announcement with a lukewarm response, citing public safety concerns including enforcement of edibles regulations, workplace safety, and potential impacts on children. The governor has already included a number of restrictions and regulations to address these concerns — the proposal would prohibit Rhode Islanders from growing their own weed, and would also ban high-potency concentrates or edibles. Despite their concerns, lawmakers have indicated that they are willing to consider Raimondo's proposal. 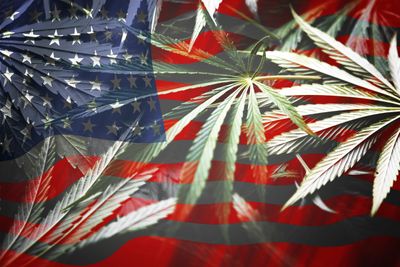 Cannabis reform has been steadily gaining ground year after year, and lawmakers in no less than seven conservative states are already debating bills to legalize medical or recreational pot in 2019. Before this year's legislative sessions got underway, lawmakers in Indiana, Texas, and Missouri pre-filed legislation that would legalize full adult-use cannabis in their respective states.

In Virginia, lawmakers have filed around a dozen marijuana-related bills so far this session, including at least one that would completely legalize recreational pot. Virginia Gov. Ralph Northam has frequently expressed his support for statewide decriminalization, but has not backed full legalization.

Last Wednesday, Kentucky state Senator Dan Seum filed a bill to legalize recreational pot sales and use. Seum argued that the bill would reduce jail overcrowding, address racial inequalities inherent in pot prohibition, bring in tax revenue, and provide new opportunities for Kentucky farmers. On the same day, West Virginia State Senator Richard Ojeda also filed a bill that would allow adults to consume, possess, and grow pot for personal use, but the chances that this bill will succeed seem slim. Immediately after the bill was filed, Governor Jim Justice announced that he is “adamantly, adamantly, etched-in-stone, adamantly against recreational marijuana,” and Ojeda is resigning from the state Senate next week to run for president.

This week, South Carolina lawmakers also proposed a bill that would expand the state’s extremely limited medical cannabis program. State Senator Tom Davis, author of the legislation, told FOX News 46 that his bill is “a very socially conservative medical cannabis bill that’s very tightly-regulated, supervised by doctors... and which draws a bright-yellow line against recreational use.” Davis added that “seventy-five percent of South Carolinians… want doctors to be able to have the power to prescribe cannabis for certain, specific conditions, which the science shows can be addressed with cannabis.”

Even though Michigan's first legal pot stores are not expected to open until 2020, some of the state's most conservative towns are already working to keep legal pot off their home turf. Much like California and Massachusetts, Michigan allows individual municipal governments to “opt out” of the green rush by banning any type of marijuana business from their jurisdictions. So far, over 80 municipalities have already chosen to do so.

While some of these local governments have issued outright bans on pot businesses, others have simply imposed moratoriums to give themselves time to understand how the state will implement their new retail sales regulations. “All those communities have plenty of time to change their mind,” Jamie Lowell, one of the authors of the recreational marijuana law, told MLive. “Over time, I suspect many of those places that have been opting out now will come online and get with the program.”

“I’m confident that many municipalities will opt-in after the State promulgates administrative rules and sample ordinance amendments are made available to municipal attorneys,” Brad Forrester, Board Member of Michigan NORML, said in a statement. “Some of the municipal officials I’ve spoken with have expressed an interest, but they don’t really understand exactly how the process works and they said they’re awaiting guidance from state officials.” 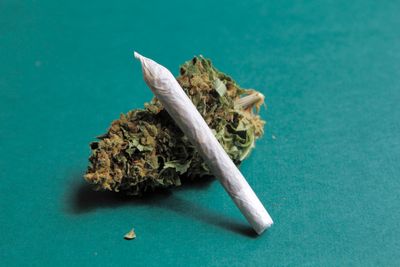 Federal Government to Spend $1.5 Million on Cannabinoid Research in 2019

One tell-tale sign of cannabis' growing acceptance is the fact that the federal government is now willing to throw down cash to research this once-unexplored plant. During the upcoming fiscal year, the National Center for Complementary and Integrative Health (NCCIH), a part of NIH, announced that it will be offering $1.5 million in grants to fund studies “aiming to identify, describe, and determine whether minor cannabinoids and/or terpenes can help treat pain.”

Although THC is fairly well-understood by the scientific community, relatively little is known about cannabinoids like CBG, CBC and CBN, or terpenes like limonene and linalool. “Early clinical data suggest that cannabis may enhance the potency of opioids in relieving pain; and the synergy from using these products together may result in more effective pain relief with lower doses of opioids,” the NCCIH announcement explains. “Yet, it is unclear which components of cannabis may have these properties. In particular, few studies have examined whether and which cannabinoids and/or terpenes interact with the opioid pain pathways.”

A new book attempting to discourage legalization by linking cannabis use to mental illness and violence has been drawing a lot of media attention over the past few weeks, and, understandably, not all of it is positive.

In his book, Tell Your Children: The Truth About Marijuana, Mental Illness, and Violence, author Alex Berenson argues that: “Marijuana causes psychosis. Psychosis causes violence. The obvious implication is that marijuana causes violence.” Berenson cites a number of research studies and statistics to support his claims, but several media outlets have already pointed out that he has either misunderstood or deliberately misrepresented these sources.

The author notes an increase in violent crimes between 2014 and 2015, which he blames squarely on weed, but experts believe that Berenson deliberately cherry-picked that year to support his claim. “Nothing interesting happened with regard to pot in 2014, but there was a national uptick in homicide in 2015–2016,” Mark Kleiman, public-policy professor at NYU, told New York's Intelligencer. Berenson pointed out a small increase in violent crimes in Oregon in 2014 and 2015, which was confirmed by FBI statistics — but the author failed to mention that the rate of these crimes dropped by 11.6 percent between 2016 and 2017, even though pot remained legal. Furthermore, Kleiman told New York that  “Cannabis consumption, and especially heavy cannabis consumption, has been on the rise since 1992.” And, importantly, “over that period, national homicide rates have fallen more than 50%.”

Berenson also claims that cannabis use has been proven to cause schizophrenia, citing a research study published in the National Academy of Sciences, Engineering, and Medicine. Ziva Cooper, a research director at UCLA who was involved with the study, told Rolling Stone that the author clearly misunderstood the study’s findings. “To say that we concluded cannabis causes schizophrenia, it’s just wrong, and it’s meant to precipitate fear,” she said. “People who have schizophrenia are also known to be very heavy tobacco smokers, but we don’t say that tobacco causes schizophrenia.”

As the book continues, the evidence reportedly becomes thinner and thinner. Tellingly, Berenson chose “Tell Your Children” as the name of his book because it was the original title of the infamous anti-pot movie Reefer Madness. But in his attempt to use misleading statistics to reignite a new era of cannabis fear mongering, Berenson's book is essentially “Reefer Madness 2.0,” as Vox succinctly put it. 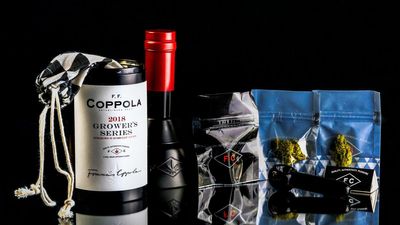 Francis Ford Coppola Is Getting in On the Legal Weed Game

Acclaimed director, winemaker, and hotelier Francis Ford Coppola has added cannabis to his long list of interests. The Godfather director recently launched a new weed company called Sana, named after an old Sanskrit word for marijuana. “Wine and cannabis are two ancient and bounteous gifts of Mother Nature, linked by great care, terroir, and temperateness,” Coppola said in a press release last November. “Expertise making one applies to the other.”

The director's first weed product is a “cannabis lifestyle brand” known as The Grower's Series. Each $99 package comes in a tin painted to look like a wine bottle, and contains three one-gram bags of flower along with a pipe, rolling papers, and matches. “[Our target audience is] people who don’t have a lot of experience with cannabis,” Kathleen Murphy, Sana's innovation director, explained to Leafly. “We are tapping into individuals who are wine drinkers who may be intimidated by cannabis by leveraging some of the same language [as wine]... We want to help educate consumers about the different expressions of cannabis.”

NEWS
420
LEGALIZATION
LEGISLATION
MORE...
IN THIS STORY
CBD
Click to shop at our CBD store
Chris Moore
FOLLOW
Chris Moore is a New York-based writer who has written for Mass Appeal while also mixing records and producing electronic music.
Share this article with your friends!
AD
By using our site you agree to our use of cookies to deliver a better experience.
Accept
Decline
MORE FROM MERRY JANE