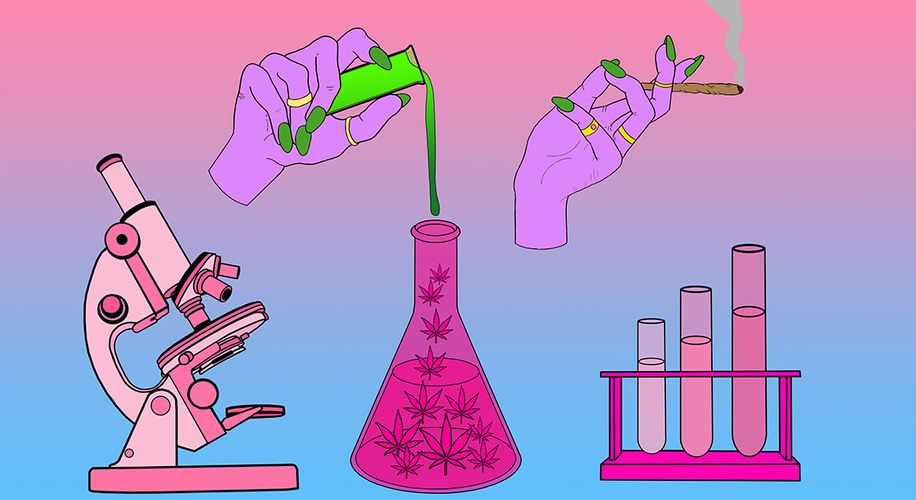 Beyond THC and CBD: Meet the New Cannabinoids on the Block

Extraction tech is advancing, and the cannabis industry is just starting to discover and isolate the numerous cannabinoids found in the plant besides THC and CBD. Could delta-8 be the next hot trend?

Extraction tech is advancing, and the cannabis industry is just starting to discover and isolate the numerous cannabinoids found in the plant besides THC and CBD. Could delta-8 be the next hot trend?

Age-reversing eye creams packed with scientifically-selected cannabinoid ratios. A diet pill made from weed. Dabs that will never get you too baked.

This is what the future of cannabis looks like.

As the rest of the world catches up to CBD – one of the many compounds in cannabis that doesn't get us high – extraction specialists are delving deeper into the plant's chemistry by siphoning troves of lesser-known cannabinoids and infusing them into novel products.

Most of us know about the most famous cannabinoid, THC, and what it does: it can reduce or increase anxiety, it can make us giggle uncontrollably, or put us to sleep. And it may do some other cool stuff, too, like regenerate brain cells or cause cancer cells to self-destruct.

As awesome as THC and CBD are, cannabis contains over 100 cannabinoids, and each offers its own unique contribution to our homeostasis, a state of healthy balance, by interacting with the body's natural endocannabinoid system. THC and CBD may work wonders on a wide array of ailments, but they're not always effective. Because the other cannabinoids exhibit their own pharmacologies, they may treat illnesses that don't respond well to THC or CBD alone. However, most cannabis strains don't produce the other cannabinoids in sufficient amounts, so a little chemistry is needed to either tease out these less-prominent compounds or convert them from other cannabinoid precursors in bulk.

Before we dive in, know that the research on the cannabinoids mentioned below is severely limited, with most of the studies performed on mice or rats. Plus, the scant few conducted with humans were usually not controlled trials. Due to the Controlled Substances Act, all cannabinoids found in the cannabis plant (even the ones we haven't yet discovered) fall under Schedule I restrictions, meaning researchers must receive stringent federal approval to study them. Further, assuming the academics clear the DEA's hurdles, researchers must still rely on the government's crummy weed, which lacks some of the less-prominent cannabinoids.

Where's it all going? Which new cannabinoids could prove to be game-changers? Which are destined to become over-hyped curiosities, fads within the ever-expanding legal market? And will any of them even get us lit? As more and more legit research occurs, and more and more canna-businesses try to differentiate themselves within the green rush with "novel" products, the possibilities and benefits of isolating new cannabinoids are just now starting to reveal themselves — to consumers and companies alike.

Delta-8-THC: For a Kinder, Gentler Way to Get Baked

When we think about THC, we're usually thinking about a specific form, or isomer, of the molecule. The one we smoke or vape is delta-9-THC. Delta-8-THC, however, promises a similar, yet nuanced, experience compared to its delta-9 isomer.

Oregon-based Oregrown makes a Pax vaporizer pod filled with delta-8-THC. The company's director of extractions, Jake Jones, told MERRY JANE that one of delta-8's benefits is that users experience its effects instantly, whereas fully feeling a delta-9 dab may take five to ten minutes.

"It really feels medicinal," Jones said about delta-8. "It's hard to explain, but it doesn't give you as strong of a high. It gives you more of a calming, relaxing sensation in the body."

Joseph Nielsen, Oregrown's head extraction engineer, described delta-8's effect as "a solid punch." "I feel it right in the forehead, behind the eyes," he said. "But delta-8 is really smooth, and it tastes sweeter [than delta-9]."

Jones and Nielsen believe delta-8 could be used as a training wheel for inexperienced medical cannabis patients. Because it produces an incredibly mellow, subtle high, delta-8 could help new patients ease into THC-based therapies, or it could replace delta-9 entirely for patients who don't like to get too stoned. Seniors, child patients, recovering addicts, or people with mental illness may also benefit from delta-8's reduced psychoactivity. Although there hasn't been nearly as much research into delta-8 compared to its rock star sibling, studies suggest delta-8 may have the same medicinal properties as delta-9.

Where can you get your hands on some delta-8 flower? Probably nowhere at the moment. In nature, delta-8 is found in cannabis at incredibly small amounts. Instead of extracting delta-8 directly from the plant, Oregrown first extracts delta-9 then converts it to delta-8 through a manufacturing process. The result is a clear, viscous oil that can be dabbed, vaped, or possibly infused into edibles.

While Oregrown only supplies delta-8 in a Pax pod, Guild Extracts in California offers a dabbable delta-8 "sap." In fact, Jones and Nielsen first learned about delta-8 a few years ago by stumbling on Guild's product. In Washington, Hitz Cannabis produces a delta-8 dab oil, and some dispensaries there carry Oleum Labs' delta-8 vape pen cartridges, as well.

Although weed is (in)famous for triggering rabid cases of the munchies, some strains do the exact opposite. The culprit? Tetrahydrocannabivarin, or THCV, a cannabinoid usually found in Afghan or African cultivars like Durban Poison. Research on rodents suggests THCV may also be able to protect the human brain, improve insulin resistance, and prevent seizures.

GW Pharmaceuticals, the creator of the cannabis-derived pharmaceuticals Sativex and Epidiolex, is currently working on a drug made with THCV. Besides killing appetite, GW's pot pill may also treat eating disorders and diet-related conditions like Type II diabetes. We may not see this weed diet pill any time soon, though, as GW's research got stuck at phase II of its clinical trial in 2016.

Outside of pharma, THCV is already finding its niche among the figure-conscious. Last year, SuicideGirls, the alt-model outfit featuring tatted ladies, unveiled its Chill Hustle Zero line of cannabis products with THCV.

"We created Zero because we wanted to get high and not overeat," said SuicideGirls' Milloux Suicide in an interview last year with MERRY JANE. "I love getting high, but I am also really into my health and fitness. I like to be able to smoke without waking up the next morning in a bed full of Taco Bell wrappers reminding me of last night's bad decisions."

SuicideGirls is not the only company seeing green in cannabinoid extractions, either. Bethenny Frankel, the brain behind the Skinnygirl brand of low-calorie wines and mixers, plans to launch her Skinnygirl Marijuana line sometime in the near future. Skinnygirl’s weed “will be a specially-engineered strain of pot designed to not give you the munchies,” an insider revealed to US Weekly.

Like all things, molecules break down over time. THC is no different. When it degrades or metabolizes, THC converts to cannabinol, or CBN.

"CBN is a more stable form of THC, essentially," said Jeremy Riggle over the phone to MERRY JANE. Riggle is the chief scientific officer at Mary's Medicinals, one of the first and only companies to offer CBN products. CBN won't get anyone lifted, but "it still has some therapeutic benefits, such as being a sedative," he added.

Fighting insomnia is just one of CBN's properties. In addition to making us sleepy, it can treat pain, reduce inflammation, and act as an antibiotic. Riggle noted that CBN may also slow or reverse signs of aging when combined with other cannabinoids, making it ideal for beauty products like face masks or eye creams.

Because CBN is made by the breakdown of THC, there's not a lot of it in most cannabis plants. Unless, of course, you're holding some seriously old weed. Mary's Medicinals doesn't get its CBN by extracting it directly from the plant. Instead, like Oregrown, they get it by extracting THC, which is then heated until it converts to CBN.

Tetrahydrocannabinolic acid, or THCA, is another cannabinoid that Mary's Medicinals infuses into its topicals. By weight, THCA is the most prevalent cannabinoid found in cannabis. When you see lab results on your bud bottles, the listed THC percentage is actually THCA. Additionally, THCA by itself is not psychoactive, which is why we burn and inhale cannabis in order to get high. Heat causes combustion, which leads THCA's acidic portion to pop off the molecule, leaving behind the THC-laden smoke we all know and love. Now companies like Mary's Medicinals want to harness THCA's power without putting it to a flame.

"If you're looking to not get high, but instead want benefits to your immune and endocrine systems, then THCA is the way to go," said Riggle. "It kind of gets the immune system kick-started and operating optimally."

Why does Mary's deliver THCA through the skin if it's intended to benefit immune and hormonal regulation? Riggle cited a 2009 paper published in Trends in Pharmacological Sciences. The skin acts as a "passive barrier" to protect the body's innards from its environment, and a vast endocannabinoid system network runs through our skin. Hair follicles and sweat glands mediate cell signaling to the immune and endocrine systems, so targeting the epidermis with THCA makes sense.

Ironically, THCA behaves much like CBD, never activating the body's CB receptors but stimulating them just enough to initiate healing effects. CB receptors act as gateways on cells, triggering specific cell signals after coming into contact with a cannabinoid like THCA. Some of those effects include halting the spread of cancers, protecting nerve cells, anti-inflammation, and curbing nausea.

Besides transdermal patches or other topicals, one of the easiest ways to get THCA into the body is by juicing raw cannabis. Unfortunately, most dispensaries only sell dry cannabis. To juice it, you need hefty amounts of fresh, wet buds. Unless you grow your own or your buddy's a caregiver, products infused with THCA may be the most efficient route — for now.

"We're starting to manipulate the enzymes that generate these cannabinoids, so I don't think we're far away from having plants that are high in THCA or CBN or whatever," Riggle said. "That's definitely where things are going: figuring out ways to produce other cannabinoids besides THC or CBD."

The mainstreaming of new cannabinoid products adds to our already-existing arsenal of goodies for customizable or directional highs. Unfortunately, we still don't know why certain cannabinoid/terpene combos make us sleepy, focused, awake, or bubbly. But isolating specific cannabinoids will help patients and researchers better understand how different cannabinoids interact inside of our bodies.

Until then, whether we're prescribed an FDA-approved weed pill or simply prefer that our beauty products are loaded with cannabinoids, we are, essentially, guinea pigs. The nation's fastest growing industry isn't just testing the limits of federal law; it's testing how we respond to an incredibly young market that could become oversaturated with THC and CBD products before legalization goes national. It's also no coincidence that many of these novel extractions are taking place along the West Coast, America's first (and so far, only) region to fully embrace regulated recreational cannabis.

What cool discoveries will companies stumble on when the East Coast finally opens up to legal cannabis? What about those in the Midwest or the Deep South? And what happens when academic researchers can finally investigate this plant's chemistry with gloves completely off?