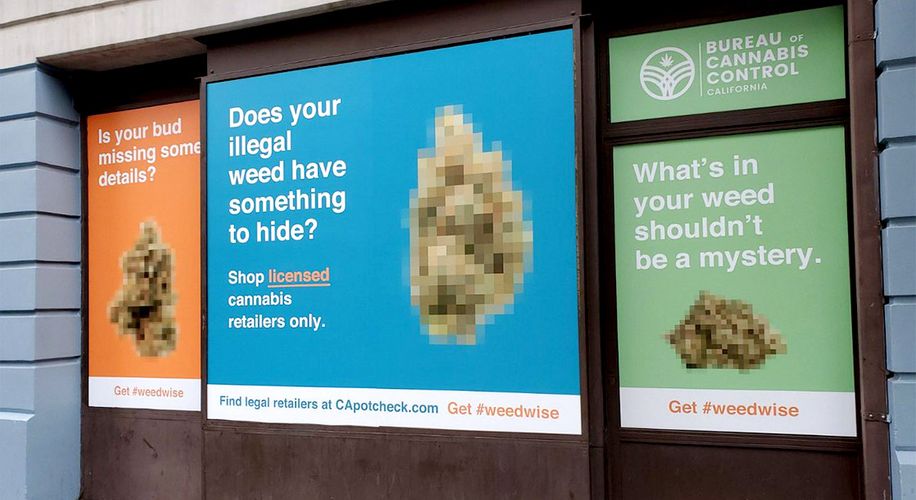 California’s black market cannabis industry has a serious case of imposter syndrome. From dispensaries and delivery services to massive cultivation operations, it can often be difficult to distinguish between the Golden State’s licensed marijuana business and their untaxed, potentially dangerous illicit counterparts.

But now, after more than a year of consumer confusion and revved up enforcement actions, the California Bureau of Cannabis Control (BCC) is finally stepping in to clear up the fog. According to Fortune, California has now begun a new statewide advertising campaign to bring attention to the industry’s shadowy side and encourage shoppers to go legal.

The new information campaign, Get #WeedWise, will use social media hashtags and massive billboards to remind Californians that black market pot is not tested for potency, pesticides, mold, or other contaminants, even if it costs a little less. In addition to the in-your-face advertising, the #WeedWise campaign also inspired the construction of a new online license database, CApotcheck.com, where cannabis users can now look up the legal status of any Golden State dispensary or bud brand.

“[The campaign] will directly impact consumer safety by clarifying that only cannabis purchased from licensed retailers has met the state’s safety standards,” BCC Chief Lori Ajax said in a statement.

In large storefront and billboard advertisements, #WeedWise advertisements show blown-up photos of cannabis nugs blurred out completely, with captions like “What’s in your weed shouldn’t be a mystery,” and “Does your illegal weed have something to hide?” Each placard directs drivers or passersby to the licensing look-up website.

Earlier this year, local cannabusiness owners who had completed the arduous and expensive licensing process put together their own awareness campaign using the hashtag #ShopLegalShops and worked together for a social media "greenout” to create a uniform appearance across Instagram and Twitter. The effort was successful in the short term, but did not significantly curb California’s black market purchases.

As state regulators readily admit, California will need to hand out a whole lot more licenses for growers, processors, distributors, and dispensaries if they want to actually reel in the black market and create a regulated industry with a level playing field. But until that day comes, state regulators are putting the ownus on customers to wisen up and go legal.