HEALTH
The Reefer Remedy: 5 Ways Weed Can Reduce Hangovers
AD
Here’s how weed can be used to help survive your next throbbing hangover.
Published on May 23, 2019

Weed may be one of the last things on your mind when you have a level-10 hangover. But it’s actually a lifesaver and can flip the gnarliest of hangovers on its head. It eases the cyclical nauseating symptoms, allowing for true relaxation. So, instead of wasting time trying hangover remedies that hardly work, try surviving your next hangover with some good 'ol weed.

Scientists don’t fully understand all of the causes behind hangovers. But we do know that they’re caused by alcohol-induced dehydration, an overproduction of urine, and disrupted enzyme production, among other disturbances. Basically, alcohol rattles the delicate balance of important chemicals in the body, which, in turn, drains it of nearly all physical sensations of well-being.

Yeasts in alcoholic drinks produce ethanol — but also produce congeners, which are toxic chemicals that include methanol, isopentanol, and acetone. Worse, methanol turns to formaldehyde. So it’s no mystery why binging on alcohol makes you feel like shit. Even darker, sugary drinks like Bourbon whiskey, cognac, and tequila are especially high in congeners and are a guaranteed hangover for almost anyone who drinks them.

One of the best ways to avoid hangovers is through strategic prevention. Some swear that taking activated charcoal before drinking magically prevents hangovers, but that theory may be dubious at best.

In 2019, there are dozens of before and after hangover pills and patches, like Bytox and Last Call — but don’t hold your breath. Results vary with these anti-hangover remedies. The benefit of using a patch over a pill is that your body won’t immediately expel it. Gulping down water and nutrients before passing out is a time-tested prevention strategy, however.

Beyond pharmaceutical drips and medications, there are few (if any) conventional medicines that cure a severe hangover. Unfortunately, it must run its course. Cannabis derivatives, however, are among the only remedies that can help reduce nausea, headache, vomiting, muscle aches, and irritability.

Conversely, weed generally doesn’t contribute to any kind of hangover. A so-called “weed hangover” is poor wording because it’s not at all like an alcohol hangover.  And, unless you’ve suffered from a rare case of cannabinoid hyperemesis syndrome, weed probably has never caused uncontrollable vomiting, nausea, or aches. Rather, cannabis helps quell most of those symptoms. 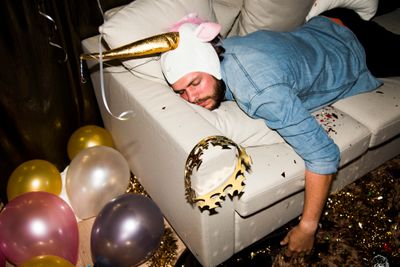 Cannabis’s medical properties include regulating nausea and vomiting. When presented with a toxic challenge — like too much alcohol, for instance — cannabinoids have been shown to suppress vomiting via CB1 antagonism. We’ve known about the antiemetic properties of cannabis for a long time, which comes in handy when you don’t have pharmaceuticals like Zofran lying around. But when you have a hangover, it’s hard to stomach anything, especially pharmaceuticals. So, in some cases, smokable medicine is the only way to experience relief when you’re hugging the porcelain throne.

No one disputes that cannabis causes the munchies. And because you can’t recover from a hangover without eating — the munchies are particularly useful when trying to beat a hangover. Alcohol irritates the stomach lining — and can even erode it — causing alcoholic gastritis, though this takes years of alcoholism to achieve. Cannabis may be helpful for treating gastritis, as well.

Hangover symptoms are also due to hypoglycemia, a distinct weakness associated with hangovers. So eating helps take the hangover away. It also replenishes the nutrients your body is starving for after a weekend bender.

Light sensitivity can be a major hurdle when battling a hangover, and it frequently causes lingering headaches. A pounding hangover-induced headache is in part caused by increased levels of acetaldehyde, a toxic chemical that builds up in the liver as a byproduct of alcohol metabolism. Acetaldehyde leads to inflammation, which ultimately leads to headaches.

When darker alcoholic drinks are consumed, headaches are exacerbated by congeners. Thankfully, cannabis can help distract the mind from nagging headaches. It also helps reduce inflammation. Thus, using cannabis for the treatment of various headache disorders is common, and can likely help throbbing head pain.

Cannabis is also used to treat various types of difficult-to-treat pain. And when you’re hungover, everywhere hurts. CBD’s anti-inflammatory analgesic properties makes it an ideal cannabinoid for hangover relief. Hangovers can cause difficult to pinpoint and treat back, joint, and neck pain. But cannabis helps with traveling muscle aches.

Choose a strain high in both CBD and THC, to help loosen up muscle tightness and aching. Muscle-calming strains like Mendo Purps, Blue Dream or Afghan Kush are especially useful for reducing muscle aches.

Finally, cannabinoids also help reduce general irritability. While not the worst symptom of a hangover, most people in the throes of a hangover just want to be left alone because everything (and everyone) is irritating.

Cannabis has a significant impact on how we process emotions. However, it should be noted that there are conflicting data supporting the benefits and detriments of its effect on how and what we feel. Measuring mood is a complex task, but cannabis has been shown to be an effective treatment for mental disorders and mood temperament. Anyone who smokes weed regularly can attest to its ability to make almost any situation better.

And that includes hangovers.

NEWS
CBD
MEDICINE
THC
MORE...
IN THIS STORY
CBD
Click to shop at our CBD store
Benjamin M. Adams
FOLLOW
Benjamin Adams is a freelance writer whose work has appeared in a slew of publications including CULTURE, Cannabis Now Magazine, and Vice. Follow Ben on Twitter @BenBot11
Share this article with your friends!
AD
By using our site you agree to our use of cookies to deliver a better experience.
Accept
Decline
MORE FROM MERRY JANE