HEALTH
Can Smoking Weed Increase Your Heart Rate or Blood Pressure?
AD
Studies disagree on whether cannabis use can protect the heart or harm it. But what do we currently know about THC and your ticker?
Published on March 2, 2020

It’s happened to even the most experienced cannabis consumers: Someone took a massive rip of some weed labeled “sativa,” a hit so big that it filled every microscopic lung sac with THC-laden smoke, and shortly after coughing it out, the daring toker began to experience paranoia. Sweat beaded across their forehead. And soon, they swore their heart was racing.

But no one has ever died from smoking too much weed, right? Right.

Heart disease contributes to roughly a quarter of all deaths in the US. In 2017, roughly 2,800,000 Americans died from heart disease, making it the number one killer in the Land of the Free. (In case you’re wondering, cancer comes in second, and traffic fatalities rank third.)

The science on whether cannabis harms or heals the cardiovascular system remains contentious and unresolved. After all, the legendary cannabis activist Jack Herer experienced four cardiovascular events over his lifetime: a heart attack and a stroke in 2000; another heart attack in 2009; and another heart attack in 2010, which took his life. So, did cannabis protect Herer through each of these events, or did it contribute to them? Or does it depend on who’s smoking and what they’re smoking? 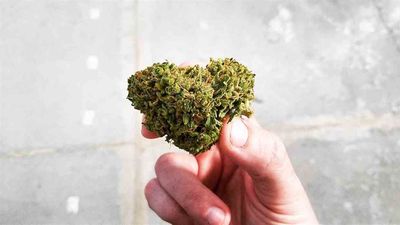 Basically, some studies suggest that marijuana protects our heart and blood vessels, preventing hypertension, cardiac arrest, and even strokes. But other studies say just the opposite, that weed can ramp up the heart rate — and blood pressure — which could increase the risk of heart attack and stroke.

Let’s first take a look at the research that suggests weed helps with heart rate, blood pressure, and protecting our blood vessels.

A 2013 review paper in the British Journal of Pharmacology looked at CBD’s, or cannabidiol’s, effects on the human cardiovascular system. According to his research, CBD could potentially treat diabetes and inflammation, two conditions that contribute to serious cardiovascular damage. CBD can also reduce stress, another major contributor to heart and blood issues. And the same guy who wrote this paper also looked at 2-AG — which could be considered the body’s natural version of CBD (the two are chemical analogs) — and found similar positive effects from the endocannabinoid as he found with CBD, a plant-derived cannabinoid.

Another study from 2017 found that just a single dose of CBD could lower blood pressure. That could be good news for anyone living with hypertension.

THCV, or tetrahydrocannabinol, is another cannabinoid found in cannabis, but one that’s much rarer than either CBD or THC. THCV can suppress appetite, essentially making it the anti-munchies component of weed. Researchers also know that it regulates insulin activity — meaning it could treat or prevent diabetes, which, as noted above, is a major contributor to heart disease.

But what about THC, or tetrahydrocannabinol, the compound in cannabis that gets everyone lit? A 2008 study found that THC could prevent plaque buildup in arteries, the same plaques that cause heart attacks. But, as we’ll discuss below, THC could also be the thing in weed that worsens heart conditions, so let’s not get too excited about everyone’s favorite party molecule.

However, all-in-all, cannabis may not do much to help or harm the cardiovascular system. In 2018, researchers looked at 24 studies regarding heart health and marijuana use. The studies ranged from 1975 to 2017. After four individual reviewers graded the studies on legitimacy, they concluded that there wasn’t enough data to show that weed protected or damaged either the heart or the blood vessels. Does that settle the issue? Not really, but it does mean we need more research on this topic, which is currently being obstructed by the federal government’s stance on cannabis. 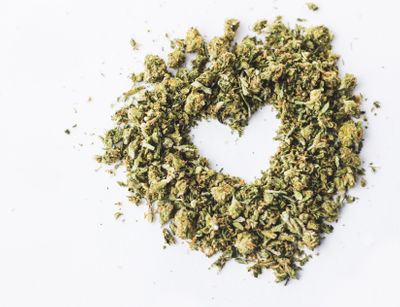 OK, now for the not-so-fun portion of this discussion.

Furthermore, we can look at states with lax marijuana laws to glean further insight. If medical marijuana states have more people smoking pot within their borders than states under full prohibition, then we should see higher rates of heart disease in medical states, too, yeah? According to a 2018 study in the International Journal of Drug Policy, medical states saw a 2.3 percent and a 1.3 percent increase in heart disease diagnoses among men and women, respectively, shortly after the passage of their medical marijuana laws. But, to be fair, it’s not accurate to compare the number of cannabis users in medical marijuana states to prohibition states, since there’s no way to track how many people consume cannabis in prohibition states. Plus, correlation does not imply causation.

However, that 2018 study didn’t look at data after 2014, either, which is when Colorado and Washington started selling legal recreational weed. It’d be interesting to see how the data pans out now that 11 US states now have legalized commercial cannabis.

There are also studies that show that someone’s risk of heart attack is five times higher after smoking weed than when they’re sober. Another study found that regular cannabis consumers were four times more likely to suffer a stroke than non-consumers. Note that both of these studies only looked at pot smokers, and we know that smoking anything — whether cannabis or tobacco — exposes the user to smoke particles that can damage cells and DNA. It’s possible that regular consumption of non-smokable forms of cannabis, such as edibles, drinkables, tinctures, topicals, or vaporized products, may not contribute to heart disease. Or, some other factor such as stress (like stressing out over being arrested for smoking weed) could be higher in some weed smokers than in those who abstain from the plant.

I find it quite ironic that the most dangerous thing about weed is getting caught with it.

Basically, if you’ve got heart issues, talk with a doctor before you pick up a bong or a vaporizer. And always keep track of how you’re feeling when you’re lit. If smoking a doob ain’t working out for you, try another, non-smokable form of cannabis. The science is still out on whether cannabis helps or hurts your heart, but one thing we know for sure is that weed alone will not kill you.

RESEARCH
EDUCATION
DOCTORS
BLOOD
MORE...
IN THIS STORY
CBD
Click to shop at our CBD store
Randy Robinson
FOLLOW
Based in Denver, Randy studied cannabinoid science while getting a degree in molecular biology at the University of Colorado. When not writing about cannabis, science, politics, or LGBT issues, they can be found exploring nature somewhere in the Rocky Mountains. Catch Randy on Twitter and Instagram @randieseljay
Share this article with your friends!
AD
By using our site you agree to our use of cookies to deliver a better experience.
Accept
Decline
MORE FROM MERRY JANE