CULTURE
WTF Is an Amanita Muscaria Mushroom and Does It Get You High?
AD
Psilocybin mushrooms are all the rage. But what about the famous red and white spotted toadstools — what makes them different, can you eat them, do they make you trip?
Published on November 19, 2019

When most people hear the term “magic mushrooms,” they immediately think of psilocybin, a family of fungi that produce the hallucinogenic compounds psilocin and psilocybin. Another mushroom, however, also has strong psychedelic properties and a history of human use going back thousands of years. Known as Amanita muscaria and by its common name, fly agaric, the mushroom is deeply rooted in the shamanic traditions of the Northern Hemisphere. In fact, much of the lore behind the jolly old Christmas elf, Santa Claus, can be traced to the ritual use of this whimsical fungus.

Yes, that's right. The tale of the flying reindeer that tow a sleigh for a large man who shoves himself down chimnies to steal cookies, and leave presents for good children and clumps of cole for those who misbehave, was conceived by the magic of the Amanita mushroom. How's that for the basis of a religious holiday? 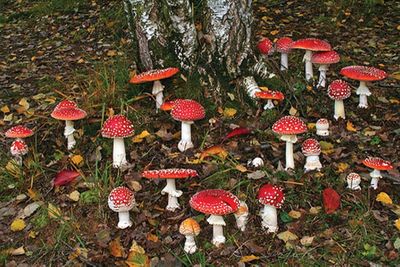 What is Amanita Muscaria?

Amanita muscaria is a mushroom that can be found growing in forests throughout much of Europe, Asia, and North America. The easily recognized species has a white-flecked red cap with white gills, and sits on a white stem. The fungus grows at the base of many species of trees, living in harmony with the roots of the trees in an underground symbiotic soil community. When the fruiting body first emerges from the earth, it is covered with a white film that breaks and separates into spots as the mushroom grows, revealing the bright red hue beneath. A prolonged or particularly strong rain can sometimes wash away the resulting signature white spots completely.

Amanita muscaria contains the hallucinogenic compounds ibotenic acid and muscimol. Although mushroom collecting field guides commonly list Amanita muscaria as poisonous, only a few confirmed fatalities have been caused by the species. However, amanitas are easily confused with a related — but deadly — species that look similar to them, so leave the wild mushroom foraging to the experts and mycologists.

The Amanita muscaria mushroom has a long tradition of entheogenic use in many early cultures of Northern Europe and Central Asia. The ritual use of the species spread to North America from Siberia during Ice Age migrations across the Bering Straits. However, the use of Amanita muscaria in the New World did not become widespread among early American cultures due to the existence of the more popular and potent psilocybin varieties.

In Northern Europe, Amanita muscaria has a rich history in shamanic traditions. The US Forest Service notes that pre-Christian cultures of the region incorporated it into their celebrations of Winter Solstice. The brightly colored mushrooms would appear at the base of trees including fir and spruce in the weeks leading up the seasonal celebration and were collected for use in holiday rituals. 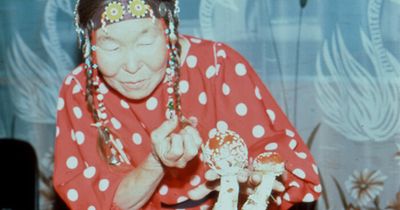 “In central Asia, shamans wore special garments to collect the fly agaric mushrooms,” the Forest Service writes. “Their coats and pants were red with the collar and cuffs trimmed with white fur and topped off with black boots. The shaman collected the fly agaric mushrooms in a special sack. After collecting the mushrooms, the shaman would return to his village and enter the yurt (a portable tent dwelling) through the smoke hole on the roof.”

The parallels to Santa Claus are unmistakable, and Amanita muscaria has permeated other aspects of Christmas lore, as well. The mushroom’s likeness has been used as a Christmas ornament, on greeting cards, and in other holiday imagery in Europe for generations. Even reindeer are associated with Amanita muscaria, the effects of which are rumored to bestow the gift of flight to the animals. 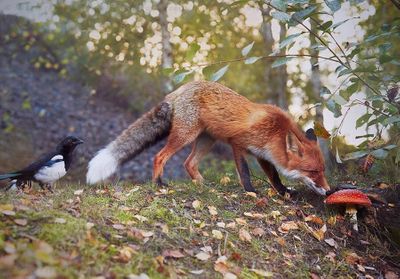 Of course, Amanita muscaria won’t really make you fly, but it can definitely inspire a good trip. When taken, the ibotenic acid decarboxylates into muscimol, the compound responsible for the psychedelic effects of the mushroom. The high induced by Amantia muscaria is different from other psychedelics such as LSD, psilocybin, and mescaline and can sometimes be unpredictable.

Users of Amanita muscaria have reported experiencing feelings of euphoria and tranquility, an altered sense of hearing and taste, and vivid changes in visual or sensory perception. Side effects include sweating, involuntary movements known as ataxia, dilated pupils, nausea, a loss of balance or coordination, drowsiness, and excessive salivation. The effects generally become noticeable 30 to 90 minutes after taking Amanita muscaria and will last between four to 10 hours. 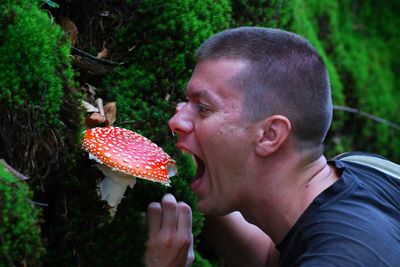 How to Take Amanita Muscaria

Amanita muscaria is generally taken after the mushrooms have been dried. Drying allows much of the ibotenic acid in the mushrooms to convert to muscimol, greatly increasing the potency. The dried mushrooms can be eaten as they are or they can also be parboiled before eating or simmered in water for 30 to 60 minutes. Once simmered, the water can be consumed with the mushrooms for a stronger effect or discarded, if desired. This is also how one would make tea, but you should strain out the mushroom particles with a strainer or cheesecloth. Mixing ginger, lemon, and honey into the tea will also help keep the nausea to a minimum.

One small mushroom cap or less than 5 grams can be considered a good starting dose for a beginner trying Amantia muscaria for the first time. One to three medium caps, or 5-10 grams, will invoke a medium effect, while higher doses of three to six mid-sized caps (10-30 grams) should result in a strong trip.

Amanita muscaria has the potential to induce a strong psychedelic effect that some say was an inspiration for Alice’s trip "beyond the looking glass." Because of their potency and the possibility of unwanted side effects, they should be taken with care. So, be sure to start low and slow, and make sure you are in comfortable surroundings with people you trust!

MAGIC MUSHROOMS
PSYCHEDELICS
WTF
MUSHROOMS
MORE...
A.J. Herrington
FOLLOW
A.J. Herrington is a freelance writer focusing on cannabis news, business, and culture and has written for publications including High Times, Sensi, and HEMP. When he's not banging away at the keyboard, you'll probably find him tending to his plants in the garden.
Share this article with your friends!
AD
By using our site you agree to our use of cookies to deliver a better experience.
Accept
Decline
MORE FROM MERRY JANE