CULTURE
Can You Smoke Magic Mushrooms?
AD
We all know you can trip from eating psilocybin mushrooms, but can you get shroomy by blazing them?
Published on November 18, 2019

If you’re here, you probably smoke weed. So, with psilocybin mushrooms riding on cannabis’s coat tails into decriminalization – and hopefully legalization, too – it’s only natural to wonder if you can mix those fungal bits with your flower for a truly otherworldly experience.

Technically, yes, anyone can smoke magic mushrooms. We can smoke pretty much anything that’s combustible. But you’re not here for technicalities; you want to know if you can trip balls if you hit a bowl of funny fungus from your bong.

Unfortunately, the answer to that isn’t clear. As far as we can tell, scientists haven’t studied what happens when someone smokes shrooms, but there are a lot of anecdotal accounts that smoking psilocybin maybe, sorta, kinda works as a psychedelic. Which means most curious psychonauts must try smoking shrooms themselves to find out. But…. 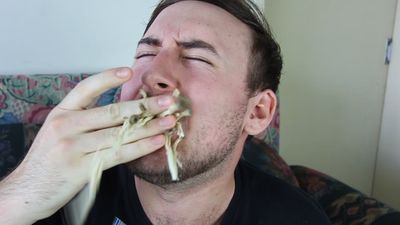 A Word of Caution

Smoking shrooms means you’ll be inhaling spores and fungal laden dust. The risk here is that the spores can trigger inflammation or infection in the lungs. And considering you need those lungs to smoke (or vaporize) weed, maybe it’s a good idea to reserve your natural air bags for the herb.

Think of it this way: Would you smoke weed with mold or mildew on it? You’re taking a similar risk by smoking mushrooms.

Gallery — Shrooms and Weed Are All You Need

The Cons: Smoking Shrooms Does Not Cause Trips

Looking at this from a purely theoretical position, smoking shrooms shouldn’t do anything for expanding your mind. Psilocybin is incredibly fragile, and it rapidly degrades under heat. Shroom material begins burning around 180°F, and psilocybin’s melting point starts around 420°F (ha!). But when combusting something in a pipe, bong, or cigarette, temperatures can easily exceed 840°F, twice the melting point temperature. That’s more than enough energy to fry the trippy compound before it can do anything in your brain.

Based on psilocybin’s chemical properties, the prevailing opinion is: No, smoking shrooms isn’t going to do anything. You’re wasting the good shit. There’s a reason most people ingest their shrooms orally, and considering how simple that route can be, that’s probably what most folks should stick with. 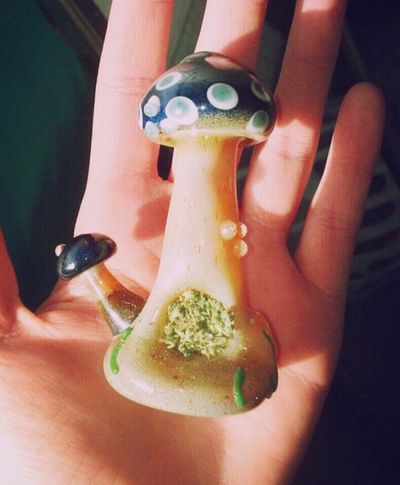 The Pros: Smoking Shrooms Can Be (Slightly) Trippy

While scientists and psychonauts may have the science on their side, there are a ton of self-reports online of people smoking shrooms and claiming they felt something. These experiences range from a brief but pleasing psychedelic blips to full-blown but short-lived trips. Regardless, the majority of these self-reports suggest that smoking shrooms leads to a fairly mild high that doesn’t last nearly as long as orally ingesting them.

Are these shroom smokers actually feeling something, or is it placebo? It’s possible that some psilocybin — and psilocin, the metabolite that actually makes people trip — survives the combustion process when it’s smoked, and whatever makes it through the pipe can absorb into the lungs and end up in the bloodstream. But as noted above, you’ll run the risk of gunking up or even infecting your lungs, since the spores are much hardier than the psilocybin. And, unlike psilocybin, spores that survive the burn may reproduce inside of your lungs. Ew — good luck with that.

So, there you have it. There’s no solid verdict on whether smoking shrooms does anything. It’s possible that smokers could achieve something similar to microdosing, but the dangers of consuming shrooms this way may be much bigger than it’s worth. If you want to consume shrooms in novel or fun ways, check out MERRY JANE’s guide on some tried-and-true methods that won’t involve a potential prescription for antibiotics.

And, as always, if shrooms are illegal where you reside (and they're still technically illegal everywhere), you should seriously consider getting your local laws reformed before dipping into any of this.

MAGIC MUSHROOMS
PSYCHEDELICS
SMOKE
MUSHROOMS
MORE...
Randy Robinson
FOLLOW
Based in Denver, Randy studied cannabinoid science while getting a degree in molecular biology at the University of Colorado. When not writing about cannabis, science, politics, or LGBT issues, they can be found exploring nature somewhere in the Rocky Mountains. Catch Randy on Twitter and Instagram @randieseljay
Share this article with your friends!
AD
By using our site you agree to our use of cookies to deliver a better experience.
Accept
Decline
MORE FROM MERRY JANE