CULTURE
Touch Down Celebration: Snoop Dogg’s Gangsta Gaming League Plays Madden 2019
AD
This edition of GGL was an ultimate Madden showdown between Snoop and his life long gaming (and blazing) buds. Here's how it all went down.
Published on June 13, 2019

Snoop Dogg has been playing Madden since his days at Long Beach Polytechnic High School. He’s also been gaming with the same group of friends since then, too. So when the most recent edition of Gangsta Gaming League (GGL) featured Madden 2019, Snoop knew exactly who to call for the most epic virtual football party.

Nearly 40 people attended the GGL throwdown on Tuesday night at Snoop’s LA compound, where he and his life long friends competed for the Madden Super Bowl title, a spot-on replica of a Super Bowl trophy, and $5,000. The competitiveness between the veteran Madden players was palpable. From the kick-off of the first game, the guys yelled and screamed at every sack, fumble, and tackle, while spectators on Mixer flooded the comments as they watched. 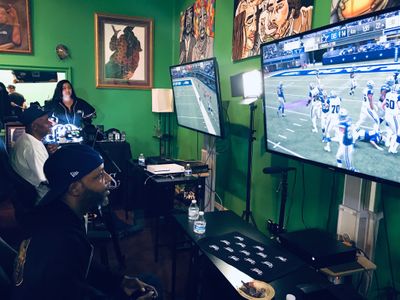 “The power of weed leads to victory,” one person wrote.

Snoop — who boasted a blue denim bucket hat, a gold Sponge Bob chain, and a white robe with the initials SD embroidered on it — and Hollywood, a beloved GGL commentator, took to the microphone for hilarious commentary about the game.

“When GGL number one went down, big Snoop Dogg walked away with the win,” Hollywood said to the live stream. “Who walked away with the win last time,” Snoop said, sliding into the seat next to Hollywood, pumping up the competition. “Who did?! Oh yeah, me!"

Those who had a “bye” in the first round stocked up on food from a table of dankness: Wing Stop provided platters of barbeque chicken wings, hot wings, lemon pepper wings, boneless chicken, french fries, corn, carrots, and celery. There were even boxes of donuts from Randy's, the legendary Inglewood donut shop. It was a feast fit for a pothead Super Bowl, and everyone chowed

Snoop's friends got down on the food especially hard, as they puffed heavy indica rolled in Backwoods prior to the food arriving. They also puffed on Heavy Hitters vapes that were available at the event. So the munchies had adequate time to sink in. 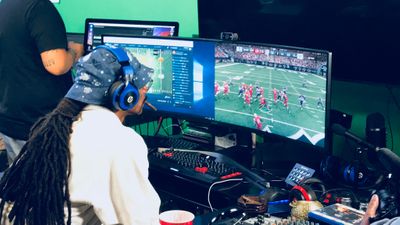 What’s interesting about Snoop’s love of Madden (and football in general), however, is the fact he loves puffing massive blunts while playing and watching the game. But the NFL isn’t so 420-friendly. “I think the NFL needs to get rid of their [anti-] weed policy,” Snoop Dogg told MERRY JANE. “The plant is a form of medicine that helps players heal. So they need to take it out of the drug policy because it is not a drug. It’s medicine.”

Snoop even went on to say the NFL should take a look at the ways in which other professional sports leagues are shifting their drug rules. “The NFL should look into what the NHL and Major League Baseball are doing as far as their drug policies,” he said. “Those shifts still allow the players to maintain their stability and still be able to have a great life on and off [the court and field].”

If only the NFL could abide by the laws of Snoop. If he’s proof of anything, it’s that you can be wildly successful and smoke weed 24/7. He’s also proof that weed enhances the ability to be a video game champion. The final match came down between Snoop and his friend Shelton. Snoop put on his noise-canceling headphones to get into the zone. He played with intense focus and made plays as if he were the wizard of Madden. He ended up winning the Super Bowl game 13-3. Snoop kissed his game controller, and remains the reigning Madden champ. When handed the Super Bowl trophy, he stared into the camera and switched on the drama with a lip-quivering cry of gratitude to the Madden gods for bestowing their grace upon him.

For more on the Gangsta Gaming League, follow these accounts:

NEWS
CULTURE
SNOOP DOGG
POP CULTURE
MORE...
Mary Carreon
FOLLOW
Mary Carreon is an award-winning journalist from Southern California and the Associate Editor at MERRY JANE. She’s drawn to stories about cannabis and the environment, social equity, veterans, the history of weed in California, and the rise of psychedelics and plant medicine in the 21st century. You can find her bylines in KCRW, Billboard, DoubleBlind Magazine, Forbes, CA Leaf Magazine, Kitchen Toke Magazine, OC Weekly, (the OG) LA Weekly, High Times Magazine, and more. Mary loves green juice, coffee, and red wine equally — but not at the same time. When she’s not reporting, you can find her doing yoga to Ravi Shankar, or migrating towards the nearest venue playing the best music. Follow Mary on social media @maryyyprankster or visit her at marycarreon.com
Share this article with your friends!
AD
By using our site you agree to our use of cookies to deliver a better experience.
Accept
Decline
MORE FROM MERRY JANE