CULTURE
The High Life of Weed Dude Vol. 16: THC Terror in the Big Apple
AD
The whole canna-crew is back in NYC, and they're ready to square off against the evil scientist who turned Weed Dude green in the first place!
Published on March 14, 2019

In the previous installment, Weed Dude and his canna-crew traveled upstate to confront the mad scientist who spawned both our hero and the Sex Robot. While the tokin' team was able to equip the robot with the sex organs that the scientist deprived her of, the villain was still able to escape!

Now, everyone's back in NYC and some shit is about to hit the fan. The evil scientist has his cat Misty for protection, as well as some futuristic technology that turns anyone in his way into crystalline THC. But that won't stop Weed Dude from fighting the bastard who turned him green in the first place!

Dig into the dank visual feast below, created by the inimitable Mike Diana. And for more on the series, re-visit the fifteenth installment here. 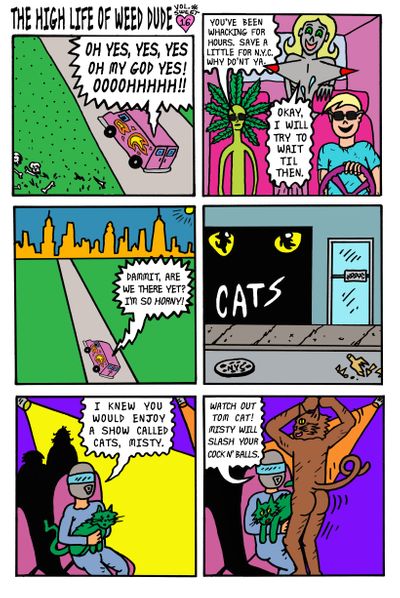 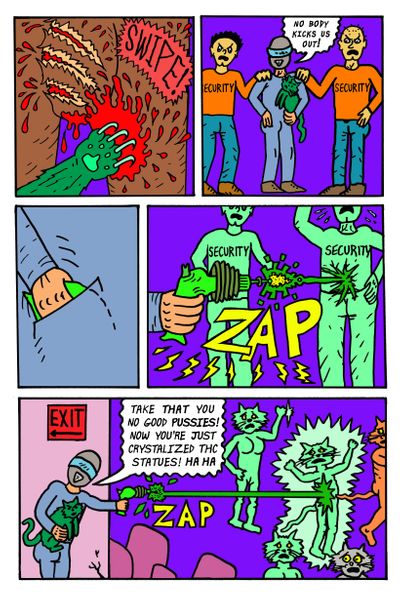 420
ART
CULTURE
ILLUSTRATION
MORE...
Mike Diana
FOLLOW
Mike Diana is an underground cartoonist and cult hero whose been self-publishing work since the late ‘80s. He is the first person to receive a criminal conviction in the United States for artistic obscenity. Visit http://mikedianacomix.com/ for more of his art.
Share this article with your friends!
AD
By using our site you agree to our use of cookies to deliver a better experience.
Accept
Decline
MORE FROM MERRY JANE