CULTURE
Stoned Sex: How Weed Witches Enhance Their Orgasms and Highs with Sex Magick
AD
Like cannabis, witchcraft has a complicated past filled with stigmatization and persecution. Therefore, using weed and witchcraft together is a magickal pairing — an enchanted hybrid, if you will.
Published on June 7, 2019

Welcome back to Stoned Sex, the column where I’ll be exploring the intersection of sex and sativas, intercourse and indicas, often through first-hand experience and interviews with experts. For this week’s edition, we’ll be discussing witches, weed, and using your orgasms to cast spells. Stoned Sex will be running every other week, so make sure to stay tuned for the next dose.

Sex magick is harnessing and directing sexual energy towards a goal. In my own practice, I visualize what I wish to manifest as I come. And it often works. As my body orgasms, I see myself looking fabulous at my book launch party. For me — and other weed-friendly witches — cannabis helps facilitate a mindspace conducive for manifestation. Witches believe that you can use your personal power and rituals to manifest desires into reality, and call this practice manifesation. In the case of sex magick, the form of personal power is your sexual energy, which cannabis can enhance. The plant can also be an integral aspect of sex magick, an erotic spiritual practice dating back to tantra in the first millennium and made infamous by the 19th Century occultist Aleister Crowley.

For my own sex magick practice, I get high while sitting in a meditative position in front of my altar, a table in which I honor my craft and deities, often under moon light. You can do sex magick during any moon phase, but my favorite is the full moon, the time which is believed to be most powerful for manifestation. Then I get into my bed and masturbate while envisioning my goals, especially as I come. Yes, it worked; I now have a book deal. In this edition of Stoned Sex, we’ll be speaking to other witches about their sex magick practice, and how they integrate, or choose not to integrate, cannabis into the practice, so you may become the best sex weed witch version of you.

What is sex magick?

You are the most potent ingredient in your spellwork. Sex magick should look however you like it to. Each witch is different, and the way that makes you the most comfortable is the most powerful way to embrace magick. “For me personally, sex magick is working with sexual energy as a way to raise desire and intention,” says Gaby Herstik, a High Times columnist and author of Inner Witch: A Modern Guide to the Ancient Craft. “Sexual energy is life energy.”

While an orgasm is powerful (and fun), Herstik notes that having one isn’t required to practice sex magick, which is excellent news for those who have difficulty achieving orgasm.

“It’s just fostering and feeling that fiery energy,” she says of the practice. “There are people that are asexual, and sex magick isn’t for everybody, so that’s something to take into consideration. Fixating on the orgasm can take away from the potency of the spell, too.”

So whether you’re having an orgasm, touching your erogenous zones (which doesn’t necessarily mean your genitals), or just really feeling yourself, sex magick is channeling that energy towards a goal. The intention in sex magick can be anything from career goals to self-love — it doesn’t have to be about sex at all. Of course, like all magick, the work doesn’t stop once the spell is complete. You must take action to follow through on your desires.

Sex magick can be done with a partner, although many witches prefer to practice alone. It’s a sacred experience that often works best with masturbation. Doing sex magick while hooking up with someone can be distracting (especially if both parties aren’t on the same page), which can also negate the strength of your spell. If you do try partnered sex magick, make sure your partner is in on the shared goal, so you’re joining forces. But telling them is up to you — it’s not mandatory. What you want to avoid is a situation in which you’re trying to do sex magick and your partner is acting patronizing and disrupting the flow with their muggle vibes.

“It’s a very empowering practice, and I think of it as a solo practice,” says curator and witch Sarah Potter. “It’s important to be clear with your intentions and have clarity because this is such a powerful form of magick,” she adds. 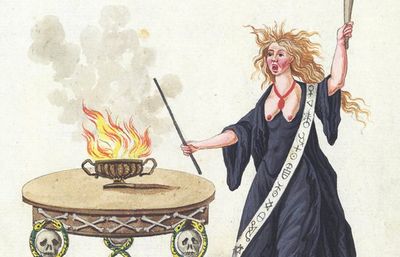 What does weed have to do with sex magick?

The aforementioned Aleister Crowley is a controversial figure in the occult world. Unfortunately, like many powerful white men, his legacy is marked with sexism and racism. However, as author Chris Bennett points out, Crowley is credited with bringing cannabis back en vogue within the occult community, just as he did with sex magick. Cannabis, like many other plants, herbs, and mind-altering substances, has been a part of spiritual practices for thousands of years. It is believed that the Knights Templar, a Catholic military order active between the 11th century and 13th century,  may have used cannabis. The Knights Templar were eventually tortured and killed by the church for an array of “sins,” such as worshipping a false idol you may have heard of named Baphomet. Dating back even earlier, cannabis was named one of the five most spiritual plants on Earth in the Atharva Veda, one of the four sacred texts of Hinduism.

Open-minded people know that certain plants and plant-based medicine, such as cannabis, can be a spiritual tool in creating altered states of consciousness. And, usually, these same people understand that plants can also be an aphrodisiac, which is why there’s an endless hunt for things that enhance sexual desire. Adding the ritual of preparing and ingesting cannabis to your sex magick practice comes intuitively to stoner witches.

In my witchcraft practice, cannabis expands my mind to the possibility of magick, and makes me more likely to perform spells, thanks to those fabulous lowered inhibitions the plant triggers. I use cannabis before spellwork for the same reasons I’d use it before attending a social event. The lines of medical, recreational, and spiritual use do not have to be strict. For me, I’m more comfortable and open-minded while high. And in the same way that the plant helps me socialize at events, it also allows me to open my mind to the possibility of using orgasms to cast spells or manifest a professional goal. Sex magick sober is great, but like everything for me — from attending a concert, to having sex — cannabis amplifies my enjoyment while lowering anxiety.

Cannabis also keeps me present and focused on the crucial task of coming while visualizing my book party. Regarding cannabis, there is absolutely no one correct way to add it to your sex magick practice. As a fairly laid back witch, I simply smoke while meditating on my intention beforehand. Cleansing the space by saging is a common way to open and close a ritual (and to mask cannabis smells, should you need). You may want to inhale cannabis as you come. For witches who enjoy crystals, you can purchase both pipes and dildos made out of pink quartz, a crystal associated with love. You may want to write a letter of intention ahead of mine, invoke each element, and honor a certain deity during your spellwork, such as Venus, the goddess of love an abundance. Or you may just want to get high and masturbate while visualizing your goal and be your own god. Enhance your sex magick practice with meditiation, crystals, the tarot, cannabis lube, or any other of your favorite tools, but remember that performing spell work is a form of magick on its own. Sex magick is a very personal ritual. And, for many, adding cannabis makes getting in touch with your personal magickal truth easier.

“Cannabis helps me get back into my intuitive nature and out of my head,” Herstik notes. “Smoking helps me access my heart and process things in a way that I don’t have to fucking understand. It helps me be present and really experience the magick.”

Do you have to get high to do sex magick?

Let’s be honest about this, though: stoned sex magick is not for everyone. “Cannabis can open the channels faster, and I totally see why it works for other people,” says Potter, with “channels” being an expression witches use to refer to doors between the human Earth and all that exists beyond the veil, or in the spiritual realm. “It does not work with my system and the way that I have to live, though.”

Kristine Sollee, author of Witches, Sluts, Feminists: Conjuring the Sex Positive, previously used cannabis during sex magick, but heeded the warnings of a tarot reader and psychic she met at a party. “She sat down, and all these truths were spilling out,” she said. “One of the things she was saying was that I can’t commune [work with energies across the veil] when I’m on substances. Instead, I have to reach that through breathwork and meditation and other channels.” Regarding cannabis use during sex magick, as with marijuana use in general, the only way to learn if it’s helpful for you or not is to experiment. So always start small, and it can’t hurt to get the opinion of a powerful psychic — should you run into one at a party.

Witches usually understand that every individual reacts differently to various substances. While many mainstream religions encourage uniformity, being a witch is about being you. “Plants and herbalism are such an essential part of witchcraft. With all of these tools and methods, it’s like how some people flock to crystals, and others don’t,” Potter says. “I think there are certain plants that we relate to. It’s just knowing what you need and listening to your intuitive voice.”

And while an elevated mind and expanded consciousness are fabulous, remember that there’s no shame in performing sex magick high simply because it feels good.

“Cannabis is honestly just part of my life,” Herstik says. “I smoke weed a lot, and it’s such a tool for me to get out of my head and back into my heart.” After so many decades of prohibition, watching witches publically talk about using cannabis for sex magick feels like watching a spell materialize in and of itself. Like cannabis, witchcraft has a complicated and bloody past filled with stigmatization and persecution. Therefore, using weed and witchcraft together is a magickal pairing — an enchanted hybrid, if you will — for even more reasons than the combo making me come really hard while willing my book into fruition. My spell worked, and now I’m going to get high and masturbate again, and snag my second book deal. Now it’s your turn.

RELIGION
SEX AND ROMANCE
SEXUAL HEALTH
SEX AND CANNABIS
MORE...
Sophie Saint Thomas
FOLLOW
Sophie Saint Thomas is a writer based in Brooklyn. She was raised in the U.S. Virgin Islands. Along with Merry Jane, her writing has been published in VICE, Cosmopolitan, Marie Claire, High Times, Nylon, Playboy, GQ, Harper's Bazaar and more. Brooklyn Magazine included her on their annual 2016 30 Under 30 Envy List. Her favorite strain of weed is Grand Daddy Purp.
Share this article with your friends!
AD
By using our site you agree to our use of cookies to deliver a better experience.
Accept
Decline
MORE FROM MERRY JANE