For this week’s edition, we’ll be discussing the intersection of weed and sex parties. 'Stoned Sex' will be running every other week, so make sure to stay tuned for the next dose.

*Last names have been withheld to protect anonymity

“Don’t fake orgasms” read the sign on the mirror. I stood in the bathroom of the new Soho clubhouse called NSFW (the New Society for Wellness), and knew I was among my people. The club — which is now my go-to sex-and-cannabis-friendly underground venue — formed in New York City in 2014 and rose to media attention roughly two years ago. But not just anyone can attend. You must be a member to get in.

I appreciated the wisdom on the mirror. Although I don’t fake orgasms, I have had them without touching myself before, thanks to being higher than a 747 flying back from Amsterdam. Weed’s magical sex power is the reason NSFW is next level. But, truthfully, I don’t get “747” stoned while I’m there: I only get high enough to feel comfortable sucking dick in public. And as someone who doesn’t drink alcohol, a sex-friendly cannabis club was a Goddess-send from our queen Mary (or MERRY) Jane.

After going there several times as a sex and cannabis reporter — and enjoying myself so much I came back strictly for social reasons — I determined that the best way for me to make use of the new space is to bring a partner I trust, introduce them to the community, and proceed to get my brains fucked out. And because stoned sex is so mindblowing (that we dedicated a column to it!), it was only a matter of time before a place such as NSFW came (ahem) into existence.

And thank Satan it did. There are plenty of places in Manhattan to meet up for a drink, but there aren’t many spots to share a joint with a date — or have sex on a bed in a Soho longue that looks like an upscale opium den. To learn more about the marriage of sex parties and weed, I spoke with Daniel Saynt, NSFW founder and chief conspirator, and a woman named Kim*, an LA-based writer who recently had her first stoned sex party experience — and it’s one for the books. So read on, dear hedonists, and try to get on NSFW’s waitlist; or create a sex and weed club in your own apartment. Because in the end: sex and weed are still safer than booze.

Weed Makes Sex Feel Better, and Is a Natural Additive to Sex Parties

Stoned sex freaks know what cannabis can do for your intimate life. For those who don’t, it enhances touch and makes sex feel better. It helps us stay in the moment with our partner, promoting heightened connection. Of course, it can also calm nerves, which really helps with the weirdness of dating.

“In general, when I use cannabis during sex acts, I am able to get really in tune with my body and the way that I’m feeling,” said Kim in an email. She attended her first sex party on 4/20 and discovered that the sex vibrations of weed translate well to play parties. “This time was no different. I was so focused on every sensation I was feeling and everyone who was touching me. It didn’t matter that there were like 30 people watching; I was so in the element of feeling my own pleasure.”

Research suggests that cannabis can enhance blood flow, increase senses, and decrease pain, which explains the physical benefits it has on people’s sex life. But remember: the biggest sex organ is the brain. Before the physical symptoms of arousal kick in, the brain is turned on. The brain also controls commuication with our partners, which is crucial to good sex, and helps us express ourselves. Cannabis can also calm nerves and fight social anxiety, in addition to helping establish a connection with your partner(s). This is likely what allowed Kim to reach that moment of pure sensual transcendence at her play party.

Using cannabis before and during a sex party is nothing new. But social clubs dedicated to cannabis and sex are, such as NSFW, which explicitly blends the two. Their tagline is “cannabis and sex,” which aptly describes everything they’re about. “I’m just surprised that no one’s done it before,” said Saynt. “They’re two things that make my life so much better.”

There’s also a third crucial ingredient: consent. “For NSFW, the focus has always been on consent culture,” Saynt emphasized. 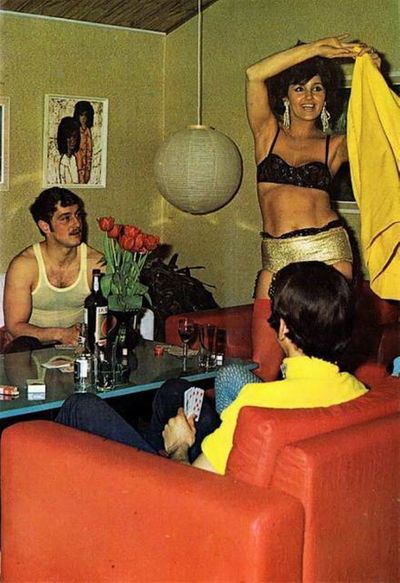 When organizing a play party, consent and pleasure go together like bong hits and Cheetos: you’re doing it wrong if they don’t coexist. Cannabis remains statistically safer than most other drugs, especially alcohol, which is responsible for 88,000 deaths a year. All while cannabis sits at zero fatalities. That said, all substances — including cannabis — can impair your ability to give consent. Despite the risks that can create, many of us would still prefer to indulge in some social lubricant before having sex in front of others.

Kim’s first sex party was in the Hollywood Hills. She opted for cannabis that night not only because it was 4/20, but also because she felt that weed was the safest option that sufficiently satisfied her needs.

“I didn’t want to drink because I didn’t want to get too drunk and have my inhibitions lowered too much and do something unsafe that I would regret,” she said. “Getting stoned seemed like the perfect solution to calm my nerves but also still be aware and in control.”

Kim also said that cannabis enhanced the welcoming and chill atmosphere of the event. “Everyone was very friendly and welcoming when I told them it was my first time,” Kim said. “There were condoms, lube, and wipes in every room, which I thought was so awesome.”

Prior to forming NSFW, Saynt spent time in other sex clubs and attending New York swinger parties, where alcohol and other drugs were at the forefront of the experience. “I’ve had negative experiences where I’ve had my drink spiked, I have woken up and known I’ve been raped,” Saynt said. “I’ve had those experiences early on and it didn’t make me afraid of sex and drugs — it just made me realize that there needs to be a different culture established.”

They do serve some alcohol at NSFW. And to help keep everyone safe they have guardians, also known as nymphs, around the space to ensure that no one is overly intoxicated. If someone is, these wonderful humans make sure the inebriated guest gets home safely.

There’s also an internal system for complaints and a “creeper report” after each party. Saynt says NSFW dealt successfully with a few instances. At the time of reporting this article, no incident has required NSFW to involve the police. 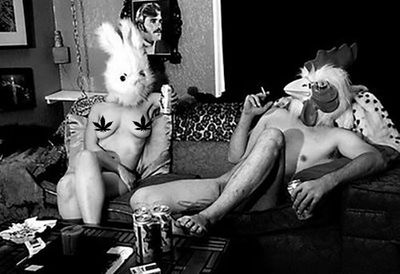 Even in casual encounters, sex is better when there’s an element of trust and security. Research suggests that cannabis can reduce negative bias in emotional processing, which helps create a bond between people who light up together.

While ass eating is optional, connecting with great people shouldn’t be. That’s why in between play parties, NSFW holds cannabis-focused events, such as Danquets, which are multi-course meals of cannabis-infused cuisine. Sure, you can get to know someone by having sex with them. But laughing over an infused-steak can turn friends into family and make an event feel like a grown-up Thanksgiving — sans the holiday drama. (NSFW does host a cannabis-infused Danksgiving, too!)

“It’s really about using cannabis as a way to unite and connect with people,” Saynt said. “That’s why those events have been so successful.”

Having attended such events — sometimes at moments in which I was lonely or couldn’t go home for the holidays — I can say with certainty that the community element is what keeps people coming back to the sex club. Perhaps even more so than the sex (but the sex is pretty dope.)

SEX AND ROMANCE
CULTURE
NEW YORK
WEED
MORE...
IN THIS STORY
CBD
Click to shop at our CBD store
Sophie Saint Thomas
FOLLOW
Sophie Saint Thomas is a writer based in Brooklyn. She was raised in the U.S. Virgin Islands. Along with Merry Jane, her writing has been published in VICE, Cosmopolitan, Marie Claire, High Times, Nylon, Playboy, GQ, Harper's Bazaar and more. Brooklyn Magazine included her on their annual 2016 30 Under 30 Envy List. Her favorite strain of weed is Grand Daddy Purp.
Share this article with your friends!
AD
By using our site you agree to our use of cookies to deliver a better experience.
Accept
Decline
MORE FROM MERRY JANE