CULTURE
Here's What You Need to Know About Buying Premium Marijuana Seeds
AD
Growing your own bud is a far more sustainable option than purchasing expensive dispensary weed. But where the hell can one find good seeds and what makes them special?
Published on September 17, 2019

Before prospective home cannabis growers can start their gardens, they must decide how to acquire their plants. In jurisdictions that allow home cultivation, clones may be available at some dispensaries and are a popular option for many growers. But for most gardeners, weed seeds are the most accessible alternative while offering their own distinct benefits. 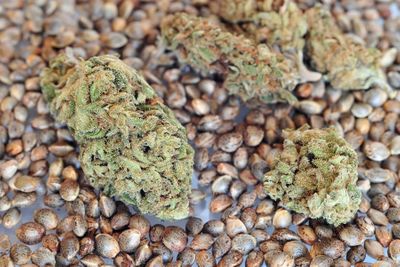 Choosing seeds over clones can be a good choice for several reasons, especially if a grower has a specific strain in mind for their garden. There are weed seedbanks that'll discretely ship products worldwide and offer a vastly superior selection of strains — literally thousands — to choose from in seed form. In contrast, the selection of clones available from dispensaries will be much more limited.

Plants grown from seed are usually more vigorous than their cloned counterparts, usually because they have a taproot that contributes to a more extensive root system. Seeds are also free of pests and disease while clones, as living plants, can already be infected with harmful organisms if the producer isn’t scrupulously careful.

Seeds also have disadvantages, though. As they are created through sexual reproduction, there will be some genetic variation among plants — even among those of the same cultivar. And unless feminized seeds are acquired (more on this later), about half of the plants will be desirable females and the rest will be males, which will have to be identified and culled from the garden before they pollinate the female flowers.

Also, newly germinated seedlings are fragile and more susceptible to failure due to environmental stressors or pests and pathogens, particularly mold and fungi. Germinating seeds and growing seedlings up to the size of rooted clones will add a couple of weeks to your plants’ length of time to harvest, too. 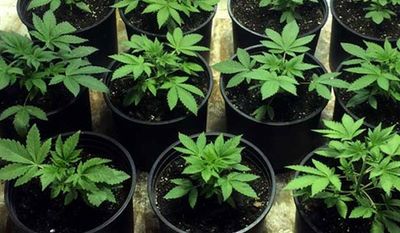 Besides determining what strains to grow, home gardeners must also choose what types of seeds — regular, feminized, or autoflower — to choose. Regular seeds are produced on a female plant with pollen from a male plant. Because of this, they will produce roughly half male and half female plants. Once the sex of the plants can be determined, the male plants are culled from the garden and discarded. That's why gardeners should purchase twice the number of seeds (at least!) as plants they wish to harvest.

In simplistic terms, feminized seeds are produced by breeding two female plants together. Without getting into a rabbit hole of science, experienced breeders nurture one of the female plants to grow pollen sacks, as if it were a male, to fertilize its female partner. But because it is a female plant breeding with another female plant, the seeds produced are, thus, female. So, it's said that plants grown from feminized seeds are 99 percent or more female, ultimately eliminating the need to pull males from the garden.

Autoflower seeds have been hybridized, usually through the inclusion of genetics from ruderalis strains, to produce flowers without fully depending on exposure to daylight — something most non-autoflowering plants depend on for growth and flowering. Instead, once the plants are sexually mature, they begin to bloom without the need for short days and long nights. Autoflower weed seeds produce plants with a relatively short time to harvest, often three months or less from the time of germination. Autoflowering strains have a reputation for being less potent, but new and improved varieties are being introduced all the time. 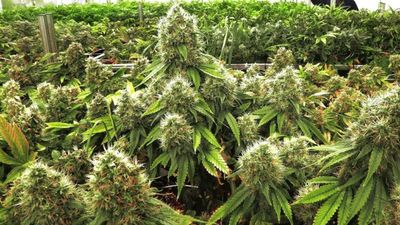 Where to Buy Weed Seeds

In areas with legal pot, buying cannabis at a dispensary is probably the safest option, although selection will probably be limited and knowledgable assistance may not available. For most gardeners, this leaves obtaining weed seeds online as the most viable option, although there a few factors to keep in mind, including the legality of the purchase.

Because of the continuing federal prohibition of cannabis, transporting pot seeds into the US or across state lines is illegal. If cannabis seeds are discovered by the postal service or customs, they will be confiscated, but most likely that will be the extent of any enforcement action.

That said, there are several online seedbanks, both in the US and abroad, that will discretely ship weed seeds anywhere in the world. The strains available, payment options, prices, and order minimums vary, so researching the different online vendors is a good idea. Wheresweed can also help you find a weed dispensary near you!

Gallery — Have You Tried This With Your Weed?

Once a few possibilities are found, continued research via search engines, social media, or online grower forums is prudent to ensure the vendors you might purchase from have a good reputation for providing high-quality products and service. A few vetted vendors include True North Seed Bank, Crop King Seeds, Seedsman, and Seedvault of California.

Before an order is placed, it should be remembered that 100 percent germination is never gauranteed and young plants sometimes don’t survive all the way to harvest. That's why ordering a few extra seeds is your best bet. And if you choose against purchasing feminized seeds, you should buy twice as many to get the desired number of plants.

After buying weed seeds from a dispensary or placing an online order, the real work begins. Now it’s time to get a designated, clean growing area ready for your new plants to bloom!

CULTIVATON
WEED
SEEDS
INFORMATIVE
MORE...
A.J. Herrington
FOLLOW
A.J. Herrington is a freelance writer focusing on cannabis news, business, and culture and has written for publications including High Times, Sensi, and HEMP. When he's not banging away at the keyboard, you'll probably find him tending to his plants in the garden.
Share this article with your friends!
AD
By using our site you agree to our use of cookies to deliver a better experience.
Accept
Decline
MORE FROM MERRY JANE