CULTURE
WTF Is Cannabis Ruderalis?
AD
If you’ve ever dealt with an auto-flowering weed strain before, you were looking at the fruits of "cannabis ruderalis."
Published on July 19, 2019

Cannabis ruderalis refers to a species of cannabis that originated in Russia, as well as Central and Eastern Europe. Ruderalis grows much, much shorter than its indica and sativa cousins, but its differences don’t stop there.

Cannabis ruderalis naturally produces higher amounts of CBD and lower amounts of THC than indica or sativa plants. What we call hemp is actually Cannabis sativa or Cannabis indica that’s been specially bred to knock out its own THC production, the intoxicating component of weed. Due to these genetic differences, some biologists consider Cannabis ruderalis its own distinct species, though others only see it as a subspecies of Cannabis sativa. (Indeed, even the sativa and indica designations are being called into question.)

Cannabis ruderalis’s main benefit to weed cultivators isn’t the short size, however. After all, cannabis’s size can be controlled by simply limiting available root space or chopping off the tops of the plant. Rather, cultivators love ruderalis for its auto-flowering abilities, which aren’t naturally found in Cannabis sativa or Cannabis indica. 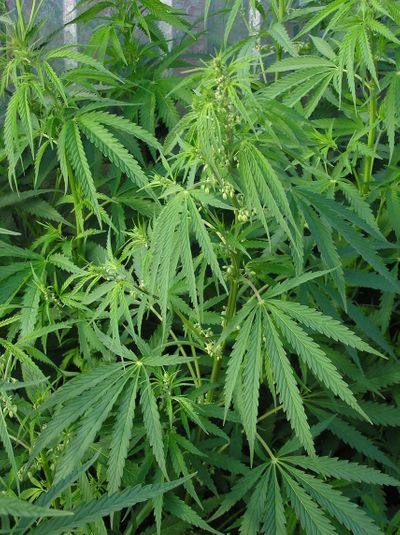 Most weed plants begin producing flowers — or buds — when their light cycle changes. Basically, when cannabis shifts from being showered in light for most of the day to a dark period where the lights are off for most of the day, the plant thinks the seasons are moving from summer to autumn. To ensure its survival, cannabis generates flowers so it can eventually reproduce and drop seeds before it gets too cold to thrive.

Cannabis ruderalis doesn’t sprout flowers based on light cycles, though. Instead, it produces flowers after a set amount of time, usually within two months.

Cultivators and home growers realized if they crossed Cannabis ruderalis with one of its sativa or indica counterparts, they could benefit from the best of both: auto-flowering weed that produces high amounts of THC (unlike ruderalis) but can be harvested much faster (like ruderalis).

Since auto-flowering cannabis isn’t restricted to light cycles, that means you can harvest primo buds at any time of the year if you’re using the sun as your primary light source. For indoor growers, you’ll harvest more frequently, since you can literally leave the lights on all day and night, without arresting the plants’ growth as is necessary during dark cycles.

Sweet. Where Can I Get Some Ruderalis Genetics?

Auto-flowering sounds neat, doesn’t it? If you’re interested in growing your own auto-flowering cannabis, check out Royal Queen Seeds, Barney’s Farm, or Pev Grow, though there are more vendors out there offering auto-flowering plants.

Just know there is one downside to auto-flowering: Cannabis ruderalis hybridized strains tend to grow smaller than their non-autoflowering counterparts. That’s great if you’re a ninja farmer running a stealth grow, but not-so-great if you’re trying to achieve massive yields.

AGRICULTURE
SCIENCE
EDUCATION
CULTURE
MORE...
IN THIS STORY
CBD
Click to shop at our CBD store
Randy Robinson
FOLLOW
Based in Denver, Randy studied cannabinoid science while getting a degree in molecular biology at the University of Colorado. When not writing about cannabis, science, politics, or LGBT issues, they can be found exploring nature somewhere in the Rocky Mountains. Catch Randy on Twitter and Instagram @randieseljay
Share this article with your friends!
AD
By using our site you agree to our use of cookies to deliver a better experience.
Accept
Decline
MORE FROM MERRY JANE