CULTURE
Heady Entertainment: Get Lit to ‘The Lion King' and Stoned to the New Sum 41
AD
This weekend, get ripped for the remake of "The Lion King," then stay stoned for "Sword of Truth" and Danny Brown's raucous talk show, "Danny's House."
Published on July 19, 2019

Disney’s live-action version of The Lion King is a weed-loving moviegoer’s dream come true: we’ve all wanted to party with a talking warthog and now the opportunity is at hand in IMAX 3D. On the indie flick tip, Marc Maron’s conspiracy comedy Sword of Truth is a low-key wonder loaded with laughs (especially when you light up first).

Our vintage cult flicks this week head into some diabolically enticing territory. The Beast in Heat (1977) is a WWII-set prison camp horror shocker that pushes every moment to entertainingly schlocky extremes. The 1970 double features of Satanis: The Devil’s Mass and Satan’s Children is one part documentary, one part ludicrous cautionary tale, and all perfect to watch while inhaling your own kind of hellfire.

Among this week’s music picks is the mighty major label debut from Maxo Kream, a dreamy collaboration from DJ Lag and OKZharp, and, believe it but don’t spill your bong over it, the return of Sum 41.

It’s the circle of life, all right. With its lush artwork, bold colors, sing-along soundtrack, and epic adventures among jungle beasts, Disney’s animated 1994 classic The Lion King initially fired up your senses full-blast when you were a kid.

Twenty-five years later, you get to experience the sweeping saga all over again, but this time, thanks to cutting-edge CGI, real animals play the parts and their voices come in an array of today’s dopest stars, including Donald Glover as Simba, Beyonce as Nala, Seth Rogen as Pumbaa, Keegan Michael Key as Kamari, and Chance the Rapper as Bush Baby. As it should be, of course, James Earl Jones also returns as Mufasa.

Best of all, now that you’re old enough to trade in mere popcorn for something more potent — namely, pot — you’ll get to take in the live-action Lion King while completely lit.

Largely improvised and strikingly original, Sword of Trust stars Marc Maron as a cranky Alabama pawn shop owner named Mel who takes a delirious detour into a world of conspiracy theorists out to prove that the South actually won the Civil War.

His ticket into this crackpot underworld is a vintage sword being peddled by visiting couple Mary (Michaela Watkins) and Cynthia (Jillian Bell), and his sidekick is endearingly immature shop employee Nathaniel (John Bass). The result is the comedy surprise of the summer, the less about which is revealed, the better. Just blaze up, ease back, and let this Sword lead the way. Trust us!

Danny’s House is a wacked-out weekly talk show hosted by hip-hop wildcard Danny Brown from his very own basement in Detroit. Executive produced by Q-Tip and billed as a surreal mix of Pee-Wee's Playhouse, The Eric Andre Show, and Mister Rogers' Neighborhood, each chat session is a one-of-kind adventure best embarked on while properly intoxicated. Guests announced so far include Schoolboy Q, Hannibal Burress, and pro wrestling icon “Hacksaw” Jim Duggan.

You may think you know actor David Harbour for his popular portrayal of Sheriff Jim Hopper on the smash Netflix series Stranger Things, but, believe us, after witnessing him in Frankenstein’s Monster’s Monster, Frankenstein, you’re going to have to smoke copiously to ever picture him as just a small-town cop again.

Harbour plays an exaggerated version of himself here. He finds out that his late father starred in a bizarre gothic horror play that aired once on live TV, which the mockumentary recreates hilariously. From there, Harbour keeps digging until learning one uncomfortable fact after another about his old-me to uproarious effect.

Written by John Levenstein of Kroll Show, Frankenstein’s Monster’s Monster, Frankenstein makes a top-notch exercise in surrealistic silliness, just meant to be paired with some of your giddiest midsummer marijuana.

Power, Influence and Hip-Hop: The Remarkable Rise of So So Def (2019)
Watch It: WE

So So Def Recordings is to Southern hip-hop and R&B what weed is to humanity’s essential smoking options: the biggest, the best, and, put bluntly, one of the main reasons we even exist. Founding mogul Jermaine Dupri traces the label’s history on the WE network special Power, Influence and Hip-Hop: The Remarkable Rise of So So Def through his own recollections on conversations with music titans on the canonical order of Snoop Dogg, Mariah Carey, Usher, Da Brat, Bow Wow, T-Boz, Will.I.Am and Nelly

From somewhere between Frankenstein (1931), Ilsa, She-Wolf of the SS (1975), and Caligula (1979), comes the Beast in Heat, a WWII-set combination of action, sci-fi, splatter horror, women-in-prison dynamics, and full-on psychosis that is said to make even the most hardcore grindhouse disciples hit their bongs extra hard while taking in this monstrosity’s extreme madness.

What plays out from there is a series of supreme schlock atrocities executed in berserk exploitation movie-style by writer-director writer/director Luigi Batzella (The Devil’s Wedding Night, Nude for Satan).

Stoned audiences have been both guffawing over and getting grossed out by The Beast in Heat since it first hit trashy theater screens and then lived on as a favorite at joint-passing VHS fright flick fests. The good people at Severin Films have now enabled us to carry that tradition on in our present era of high-def Blu-rays and absolutely primo weed.

Even at the extreme heights of the drug-fueled 1960s counterculture, it can be argued that no iconoclast more majestically embodied the concept of “Do what thou wilt” than Church of Satan founder, Anton LaVey.

The “Black Pope” (as LaVey deemed himself) and his San Francisco cult dedicated to hedonism as the highest of unholy commandments are the subject of the 1970 documentary, Satanis: The Devil’s Mass. LaVey leads a black mass on-camera, introduces viewers to his pet tiger Togare, and bewitches his devotees, who are a brain-bending combination of proto-goths, suburban swinger-types, and self-styled witches. The anti-sacred sacrament of ingesting intoxicants is also, very much, in evidence in Satanis, so we can all worship along with these affable occult weirdos.

For this collector’s edition Blu-ray, the heroes at Something Weird Video and American Grindhouse have paired Satanis with Satan’s Children, a curious obscurity that you’re advised to be thoroughly stoned for — even when just reading the description!

Made by one-and-done filmmakers in a scary, scummy district of Tampa, Satan’s Children depicts a young Floridian fellow grappling with his sexual identity. After he wanders in and out of a gay bar, a gang of creeps forces him into a car for a night of nasty assaults. Naturally, then, the victim becomes victorious by joining a Satan-worshipping cabal and exacting his infernal revenge on those who did him wrong. 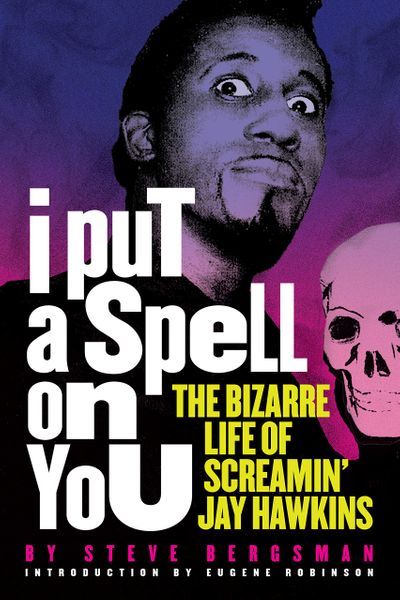 I Put a Spell on You: The Bizarre Life of Screamin’ Jay Hawkins
By Steve Bergsman; foreword by Eugene Robinson
Get It: Amazon

At a time when even the mildest rock-‘n’-roll was scandalizing square America, Screamin’ Jay Hawkins stormed the culture by popping out of a coffin on stage, casting spells with a human skull on his black-magic wand, and belting forth louder-than-life anthems to sex, sorcery, and sexual sorcery.

Most famous among Hawkins’ repertoire was the song that provides the title for author Steve Bergsman’s new biography of the man and his myth, I Put a Spell on You: The Bizarre Life of Screamin’ Jay Hawkins.

The book comes packed with hundreds of interviews about Screamin’ Jay and his ongoing impact as “the embodiment of the sexually insatiable, voodoo empowered, black man feared by 1950’s America.” No wonder everybody turned to drugs within a decade (which, yes, was very much a good thing)!

Some subjects speak about facts, others traffic in legends, and they all contribute to the inspiring, often insane story of a brazen trailblazer who blasted brains through “the devil’s music” like absolutely no other.

I Put a Spell on You also opens up with a foreword by legendary journalist, author, and musician Eugene Robinson, who lays out as only he can, a fascinating analysis of Screamin’ Jay’s contribution to music, revolution, and black identity in the United States.

Brandon Banks
By Maxo Kream
Get It: iTunes

Up from the Houston hip-hop underground, rapper Maxo Kream makes his major label debut with Brandon Banks. It’s a positive firestorm of an LP reportedly named after an alias employed by Maxo’s dad, which also plays off the record’s larger autobiographical concept.

As Maxo himself put it, “This album is me telling the story of how I’m just like my dad, except he was a scammer, and I was a trapper… My relationship with my dad now is great, we’re like yin and yang.”

Among those joining Maxo on this riveting, reefer-ready revelation are Travis Scott, Megan Thee Stallion, Schoolboy Q, A$AP Ferg, and KCG Josh. Brandon Banks deserves a first listen after you’ve gotten baked on your most brain-buzzing bud — and then again, for every listen after that (and there will be many).

Order in Decline
By Sum 41
Get It: Sum 41 Official Site

No, you’re not hallucinating. Okay, maybe you are. Regardless, the fact is that pop punk legends Sum 41 have seemingly moshed back from the beyond to unleash their seventh album, Order in Decline.

Older, more experienced, and, most importantly, not dead, Sum 41 bust out ten tracks here that emanate from the group’s origins in three chords and teenage fury, but the songs also go deeper lyrically and heavier musically than in times past to powerful effect. In every sense, Order in Decline is a surprise well worth toking to, and turning up way too loud.

Steam Rooms
By DJ Lag and OKZharp
Get It: Bandcamp

All right, ingest whatever party drugs you need (i.e., all of them) and let’s dive deep into dance music specifics. DJ Lag is the preeminent pioneer of gqom, a darkly hypnotic subgenre emanating out of Durban, South Africa. OKZharp is a superstar of the London-based mega-label, Hyperdub.

These two global groove-meisters say they’ve been corresponding since 2012, and, at long last, the planet is prepared for them to properly collaborate. The result is Steam Rooms, an album named after a slang term for Durban dance clubs.

Steamy, this music is. It’s also exploding with energy and mesmerizing in its trance-inducing intensity. As noted, you know which drugs to do. Now press play and do them!

MUSIC
TELEVISION
MOVIES
CULTURE
MORE...
Mike McPadden
FOLLOW
Mike McPadden is the author of "Heavy Metal Movies" and the upcoming "Last American Virgins." He writes about movies, music, and crime in Chicago. Twitter @mcbeardo
Share this article with your friends!
AD
By using our site you agree to our use of cookies to deliver a better experience.
Accept
Decline
MORE FROM MERRY JANE