CULTURE
Are Rove Vape Carts Legit? How Can You Spot the Fakes?
AD
With all the fake vape carts going around, it’s good to double-check and confirm that yours are real. So, how can you ensure that your Rove vape cart is safe, and not a counterfeit?
Published on November 15, 2019

Most of MERRY JANE’s vape cart guides expose the fake brands so you, the consumer, can make better informed decisions about what you’re putting into your lungs. The good news here is that RoveBrand carts are legit and licensed in California and Nevada. Unfortunately, like a lot of quality vape brands, underground producers are making fake, knock-off versions, which aren’t lab tested for quality or safety assurance. You’ve got no idea what’s actually in a fake vape.

So, how can you tell the real Rove vape carts from the fake ones? Here are a few things to look out for. 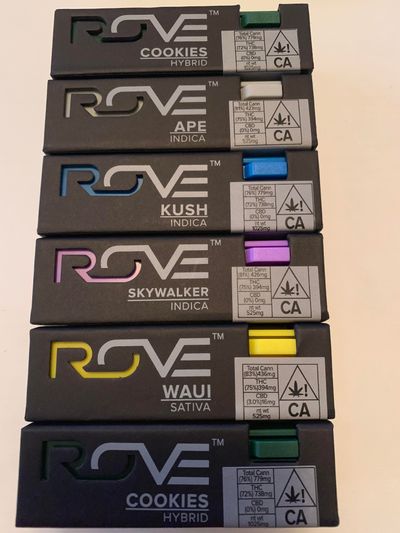 All state-legal cannabis products should include a sticker with lab data results somewhere in or on the packaging. With Rove carts, the sticker can be found directly on the cart itself.

Legit vape brands will never print things like THC content directly onto the packaging. That’s because every cannabis product batch has varying levels of cannabinoids and terpenes, and the values won’t be identical among different batches. That’s why you want to locate that sticker, for peace of mind. 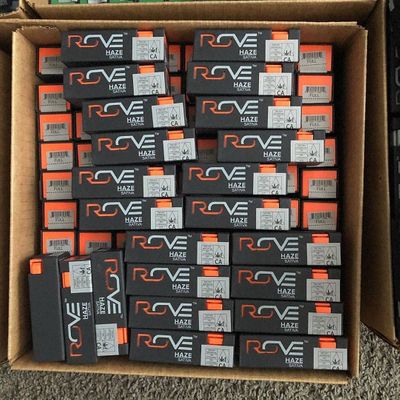 It was just a matter of time before the underground producers realized that not having lab data stickers was a dead giveaway for their counterfeits. Some fake Rove vape carts now have stickers that look just like the official California ones, so the sticker check isn’t fool-proof. 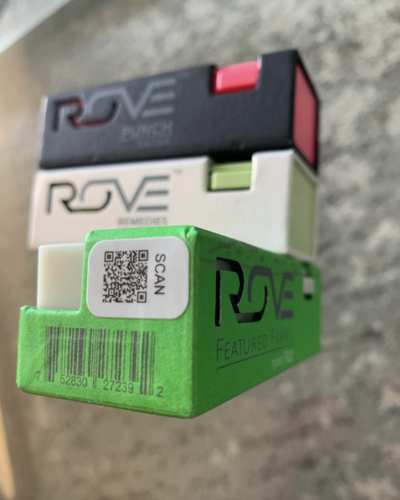 Since some of the knock-offs are almost indistinguishable from the real thing, Rove began including a QR code sticker on all of its vape products in August 2019. If you’re concerned that you have a fake Rove cart, contact the company and provide them with the QR code. If it’s real, they’ll verify the code on their end.

Real Rove Vape Carts Are Only Sold at Authorized Retailers

Since stickers aren’t the most reliable tip-off for a fake Rove cart, stick to buying your Rove products at the stores the company has partnered with. Unlike most fake vape brands, Rove has a website. And it looks professionally designed, too. On the Rove website you can find a Store Locator, which lists the only dispensaries that are allowed to sell Rove vape carts.

If you bought your Rove vape carts at any other location than the ones listed on its website, you’ve probably got knock-offs on your hands. 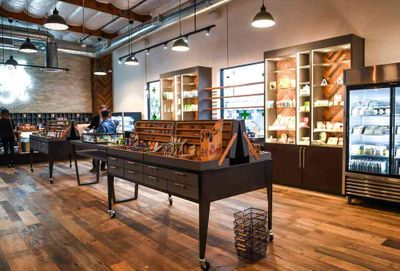 Real Rove Vape Carts Are Only Available in California and Nevada

Since Rove is only licensed in California and Nevada, you can only find legit Rove carts in those two states. If you bought your Rove carts in any other state, it’s safe to assume you’ve got counterfeits.

If you don’t reside in California or Nevada, and you got some Rove carts, it’s possible that you got real ones that were smuggled across state lines. But given the vaping health crisis in the US right now, do you want to take your chances on a hunch?

Normally, we’d tell you to check your state’s cannabis licensing search website to see if your vape brand is listed and licensed. But at the time of this writing, the California Bureau of Cannabis Control license search is down for maintenance, so you can’t check that way.

However, the RoveBrand website, as noted above, lists its authorized retailers, and the dispensaries listed on its site are licensed and legit. MERRY JANE reached out to Kannabis Works, New Generation, and South Coast Safe Access, three legal dispensaries based in Santa Ana, Orange County, that are listed as authorized Rove retailers. All three confirmed that they carry RoveBrand vapes, and that RoveBrand is, in fact, a legit company. Also, Rove is listed as a genuine brand at Leafly, which keeps track of that stuff, too. 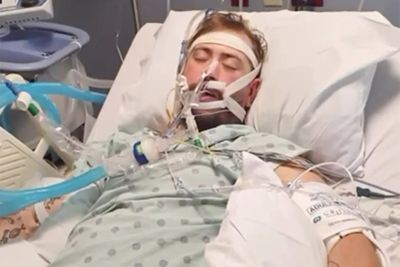 Why Should You Avoid Fake Vape Carts?

There’s a vaping health crisis occurring in the US right now. The vaping injury/illness, which is caused by vaping certain dangerous products, has sent over 2,000 people to the hospital and killed at least 40 as of this writing. Doctors believe that the damage caused by this illness is not reversible, and recently, one patient required a double lung transplant to survive.

Authorities still don’t know what’s causing the vaping health crisis, but there’s good reason to suspect it’s being caused by unlicensed, untested vapes sold on the black market — these are known as fake vapes, like the knock-off versions of Rove’s licensed products.

The US Centers for Disease Control is advising everyone to avoid vaping altogether. But if you still insist on vaping your weed, stick to the licensed, lab-tested brands available in your state. Or you can skip the pre-filled cartridges and just vape pure flower instead.

VAPE
SEO
VAPE CARTS
VAPE PENS
MORE...
MERRY JANE Staff
FOLLOW
MERRY JANE is based in Los Angeles, California and is dedicated to elevating the discussion around cannabis culture.
Share this article with your friends!
AD
By using our site you agree to our use of cookies to deliver a better experience.
Accept
Decline
MORE FROM MERRY JANE