CULTURE
Are 420-Friendly Queer Dance Parties the Key to Equality in Weed Culture?
AD
The weed industry is a very white, straight place dominated by people with loads of corporate money. What’s happening in underground club and weed culture, however, may shake things up for a greener, more inclusive future.
Published on September 3, 2019

The ring of smoke that hung around LA last 4/20 is the stuff stoner dreams are made of. But one hazy Arts District party hosted by 420 Queer showed promise for something much greater than getting blitzed-out-the-skull. DJs played bass-heavy grooves that connected house and hip-hop. The crowd — diverse in ethnicity and gender — dressed in club-kid-casual with flashes of sparkling glitter across day-lit faces. At the entrance sat a stack of information pamphlets branded with the words: "Did you know?"

You couldn’t miss them. The fold-out pamphlet offered a few brief points about cannabis and social justice. It pointed to the work of Dennis Peron, the late, gay marijuana activist whose work led to the passage of Proposition 215 in 1996, California's medicinal marijuana law. A small collection of facts and stats highlighted devastating numbers, like the fact that over 600,000 people were arrested in 2017 for weed-related offenses; and, more than 200,000 students lost financial aid eligibility because of drug-related convictions.

In fact, many people in the US — particularly communities of color — are still impacted by the War on Drugs. And 420 Queer's pamphlet was an important reminder that the fight isn’t over. It also drove home the fact that state-level cannabis regulation (meaning, the cannabis industry as we currently know it) is the result of LGBTQ+ activists, like Peron, Harvey Milk and Brownie Mary. Yet, that may not be popular knowledge among most Californians.

Similarly, electronic music and club culture developed largely in LGBTQ+ communities of color, which is a history often lost on the dance floor. That these two movements converged on 4/20 is an incredibly poignant statement about social justice and the future of both weed and dance music events. 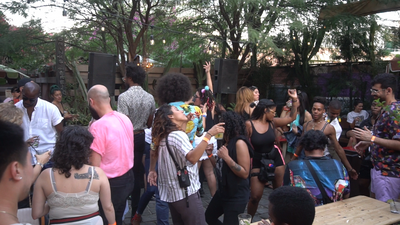 Under the 420 Queer banner, Urs Mann and Irene U. plan on building a cannabis-centered social community with LGBTQ people at the front. They want to ultimately provide visibile representation for people who’ve been overlooked in mainstream cannabis narratives. It's a scene that the couple — who first met while working in different areas of the cannabis industry — thought was missing.

"It was something that we talked about when we started going to events together — how we didn't see any gay representation, if at all, at typical industry events," said Irene, who’s been a DJ for about a decade. She was even a brand ambassador for the influential queer-centred dance party, Mustache Mondays. Now, she currently promotes the semi-annual event Lez Croix.

"I would go to the [cannabis] events and feel completely invisible as a queer person," said Mann, a videographer who produces for MERRY JANE. 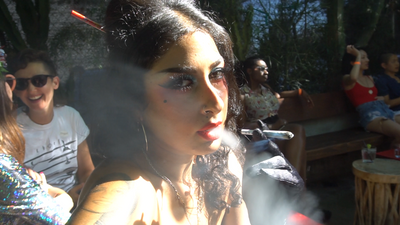 When they threw the second 420 Queer party in July, the thick crowd proved that Irene and Mann weren't the only ones craving this kind of space. But, 420 Queer isn't just a party.

"It was always an idea to create a queer collective," said Mann. That collective began to take shape on Instagram back in 2017 with a mix of historical posts, memes, and snapshots of stoner life. "I thought about it so much," he recalled. "What is it going to be? Should it be so obviously gay? Should we be literal?"

That answer was yes. Mann explained that it became increasingly clear to him and Irene that they needed to make their collective intentionally queer so that the community knew it was the place to assemble. "We wanted to do it this way because the queer community is who we want to connect with."

As their Instagram garnered more attention, Mann and Irene figured that 420 Queer should manifest IRL. And since April 20 fell on a Saturday, it was a perfect opportunity to bring together the burgeoning community in a new way. They made accessibility, good food, and stellar music central to this groovy daytime bash — while leaving out the typical stoner-party jams and avoiding all elements that objectify women. "I don't need that with my weed," said Irene, who’s known behind the decks as “Your Muther.”

Once word spread, Irene and Mann heard from people who wanted to get involved. "We have a lot of really loyal sponsors, but they aren't paying us anything. We just call them sponsors because they support us and gifted us things to give to people," said Mann. "It’s been really generous and cool getting people together and having gatherings that are not about a brand or selling you something — it's just about a vibe." 420 Queer isn’t alone in its mission of creating LGBTQ-forward weed communities. In San Francisco, Puff is a monthly weed-centric drag party held at The Stud, a bar that's been part of the city's gay, progressive nightlife for more than half a century. Sylvester, the late disco star, and RuPaul are amongst the icons who have performed there. And, just a few years ago, The Stud was saved from closure when it became a worker-owned co-operative.

Puff is hosted by Dan "DJ Dank" Karkoska, who’s been spinning tunes for 14 years and has experience working on several different drag shows. Similar to 420 Queer, the seeds of Puff were planted online. Karkoska and drag queen Maria Konner were interviewing local artists, which led to a video series of conversations with people in the weed game. Although the series didn't hit big, their launch party did.

Karkoska’s intent was to bring together the cannabis community and LGBTQ+ nightlife. While that concept wasn’t initially an easy sell — he said the idea was rejected by multiple venues — Puff has been that inclusive space for about three years. “I've really been trying to push the club as something for everybody,” Karkoska told MERRY JANE by phone, “because I believe in bringing the marijuana nightlife communities together, whether they’re queer or not.”

Puff events begin with a DJ set from Sergio Fedasz, known for the disco bash Go BANG!, which is then followed by a drag show. You might catch someone dressed up as a joint, but performers also take on other zeitgeist-y topics, like Orange is the New Black. "I want to see all kinds of art," Karkoska said.

Throughout the night, they host a "stoner raffle," where giveaways include items like small pipes or glass rigs. Over time, however, more and more companies have shown interest in working with Puff. "I'm seeing sponsorships come in, and [they’re] paying money to be part of the show and be on the poster and stuff," Karkoska said. "I couldn't do that when we started."

He anticipates parties proliferating in the not-too-distant future, particularly after the success of GrassLands, the “weed-garden” at Outside Lands Music Festival, which wasn’t just a gold mine, but also the cleanest and chillest area of the whole festival (obviously), according to reports. "Coming off of that, it's showing that there can be events where cannabis is involved that don't end badly," he said. Right now, however, LA seems to be a hub for LGBTQ-weed spaces, however. On an early Sunday afternoon in August, a small crowd lounged on a hilltop at Elysian Park, just above Dodger Stadium. Local DJ Masha, popular in the city’s underground dance music scene, dropped a dub-heavy set with Carly Simon's early '80s club classic "Why?" wafting over the field as dogs played with each other and people grabbed frozen treats from a nearby ice cream truck.

This part of the event, called “Weedstock,” was the tail end of a weekend-long celebration that aimed to bridge together the Saturday night party crawlers and fresh, Sunday morning revelers. The event was a collaboration between the “Weed Rave,” an event brand launched by Michelle Lhooq, journalist and author of the book Weed: Everything You Want to Know But Are Always Too Stoned to Ask; Ostbahnhof, and Acid Camp to bring together “Queerstock,” a counterculture celebration of underground art, music, hedonism, and inclusivity. "In general, queer-centered spaces, as well as spaces that are led by women and other so-called marginalized groups, are really important and really inspiring," Lhooq said over the phone. "I don't think that there are enough of [these spaces] in the cannabis scene.”

Lhooq pointed out that, since legalization, “a lot of white corporate interests are taking over” in the cannabis world. Undoubtedly, one could say the same thing happened to dance music and club culture years ago, as festivals and bottle service clubs came to dominate subcultures that mostly existed in underground circles.

Weedstock, a free meet-up in a public park with essentially zero corporate branding, had a DIY approach that felt rebellious in an era of slick, marketing-driven experiences. In a way, it brought both cannabis and dance music back to their counterculture roots. But, it takes more than parties to build communities. For 420 Queer, the events are just one facet of their mission. Online, Irene and Mann have met kindred spirits outside of Los Angeles through their burgeoning collective, and it's inspired some of their goals. "We want to travel and capture stories of people who we've met and have reached out to us," said Irene.

Meanwhile, the response to the “Did You Know?” pamphlet sparked them to think about other ways of bringing information to party-goers. “We had people coming up to us and saying that it was information that they had no idea about," Mann said in a follow-up phone call. Now he’s considering expanding on those facts in a brochure for future events, or possibly even crafting a zine. "I love the idea of people taking away a DIY informative piece that's so specific like that."

But, these LGBTQ+ weed events are doing more than providing visibility. They’re honoring the activist history at the center of the legalization movement while showing others that inclusivity and representation are necessary in order to move forward.

"What we’re doing is definitely rooted in activism, sharing information, and bringing queer people together who have radical ideas," said Mann. “It’s the only way we’re going to move the dial on ensuring a just future in cannabis culture.”

420
EDUCATION
LGBTQ+
QUEER COMMUNITY
MORE...
Liz Ohansesian
FOLLOW
Liz Ohanesian is an LA-based journalist covering arts, culture, and music. Her work has appeared in Billboard, Los Angeles Times, Playboy, and other publications.
Share this article with your friends!
AD
By using our site you agree to our use of cookies to deliver a better experience.
Accept
Decline
MORE FROM MERRY JANE