A pair of Utah children were hospitalized late last week after consuming cannabis-infused candy that they received from a food bank distribution center at their local church.

According to KSL News, the 5- and 11-year-old Utah kids were the latest unsuspecting victims of one of the black market weed industry’s most popular edibles: THC-Infused Nerds Ropes. Frequently confiscated by parents and police across the country over the last year, these unlicensed Nerds Rope edibles are labeled to contain 400mg of THC and packaged to appear almost identical to the classic candy.

Officials are still not sure who donated the cannabis-infused candy, but after the accidental pot dosing was made public, officials at the Utah Food Bank said that the Nerds Rope edibles were included in pre-packaged food bags given out to at least 63 families at the Roy Baptist Church late last week.

“We are absolutely horrified that this product went out to any of our partner agencies, and can easily see how volunteers would not have known what to look for,” Utah Food Bank president and CEO Ginette Bott told KSL. “We apologize to any families who may have received this product, and are changing our processes involving such donations immediately to avoid this happening again.”

As the COVID-19 crisis continues to put millions out of work, food banks across the globe have become increasingly important and significantly busier. Local police said that they have been in contact with a number of other families who received infused Nerds Rope in their bags of food, including parents of three more children who ate the candy, but did not require hospitalization.

In their investigation, Roy cops said that they have seen no evidence that the donations were a malicious attempt at giving kids cannabis, but was more likely an accidental mix-up by someone with too much weed candy on their hands — and maybe in their system.

"Right now, we do not believe nor do we have any evidence to support that the donation was intentional. We have discussed this issue with our local food bank and it appears to be an accident," Roy police sergeant Matthew Gwynn told NBC News in a statement. 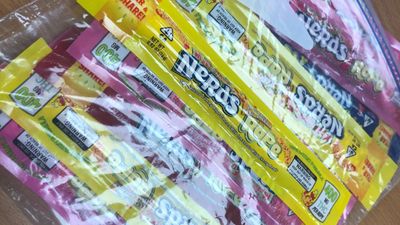 Ferrara Candy Company, the brand that produces the real-deal Nerds Rope, released a statement assuring the public that its candies do not contain cannabis, and that any product donations the company makes will stop at a sugar high.

“This product is counterfeit and in no way associated with Ferrara Candy Company,” the brand said in a statement. “We want to reassure consumers that Nerds products donated directly by the company, found at major retailers across the country, or purchased through nerdscandy.com, are safe to consume. We have reached out to the local authorities and will continue to cooperate with their investigation.”

NEWS
SAFETY
CHILDREN
UTAH
MORE...
Zach Harris
FOLLOW
Zach Harris is a writer based in Philadelphia whose work has appeared on Noisey, First We Feast, and Jenkem Magazine. You can find him on Twitter @10000youtubes complaining about NBA referees.
Share this article with your friends!
AD
By using our site you agree to our use of cookies to deliver a better experience.
Accept
Decline
MORE FROM MERRY JANE