NEWS
This Mexico City Smoke Shop Is a Hub for Local Women in Weed and Anti-Prohibitionist Meet-Ups
AD
Chicks vs Stigma is a multifaceted boutique in Mexico City that's disseminating honest information about cannabis and drug consumption, sans the dude-bro aesthetic.
Published on October 1, 2021

Mexico City has an abundance of headshops, but only Chicks vs Stigma features a resident four-year-old and a section of sex wellness products for women.

Founder Brenda Hernández operated her brand as an online cannabis education and product sales platform for three years prior to opening a brick-and-mortar store. The boutique has only been open since August, but its timely approach to local product sourcing and inclusive harm reduction politics suggests that it has the potential to change CDMX’s weed game.

Located in the Condesa neighborhood of Mexico City, Chicks vs Stigma is among the only cannabis hubs in Mexico City that centers around women. That’s what makes it a unique concept — even the store’s visual motif emanates a buoyant sense of newness. It was designed by cannabis illustrator (and recent victim of social media censorship) Isabela.420, whose drawings of sweet, smiling bongs and friendly houseplants beam down on the shop’s visitors. The store’s sliding glass doors are flanked by sculptures of red mushrooms with white speckles. Hernández’s four-year-old son Damian and partner Miguel de la Mora are often present, the former intent on his homework in the afternoons when school is out. Chicks gives customers — most of whom are substance-friendly — an overall sense of relief. It’s a refuge for those who don’t buy into the anti-cannabis and anti-drug rhetoric of old-school politics. 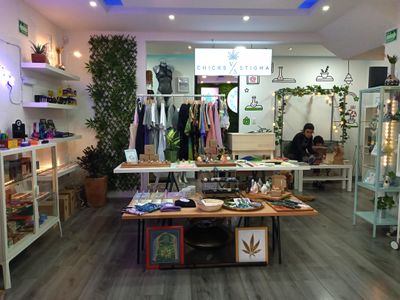 The interior of Chicks vs Stigma (Photo by Caitlin Donohue)

One of Chicks vs Stigma’s main features is that it offers a frank approach to drug consumption. This is especially helpful because the current marijuana culture in Mexico is in dire need of a facelift. Cannabis prohibition is a century-old in the country, and it was only partially lifted this past June when the Supreme Court declared the ban on weed smoking and personal cultivation unconstitutional. Despite the fact lawmakers continue to lag on passing commercial regulation, Mexican cannabis advocates are hoping for further progress during the current legislative session. But, that will only happen if the public perception of cannabis continues to shift towards science and away from prohibitionist views. That’s where projects like Chicks come in.

The store’s shelves are lined with an elegant curation of useful weed accessories, many of which are created by small, Mexican women-run brands, to help people emerge from the cannabis closet. You can find pastel ceramic chillums with gold leaf accents by Tricoma Pipes, for instance. You can also pick up sparkling resin ashtrays that have encased cannabis leaves saying, “Hagamos porros no la guerra” [“Make joints, not war”] by Monterrey artisan, Hoshi.

A small room in the back with a wall covered in decorative foliage and large, light-up renderings of a cheerfully smug mushroom in boots and a love-struck LSD tab, is designed to host product launches, workshops, and panel discussions. “We need more spaces for women, places for discussion, meeting, sharing experiences and strengthening this network of women in cannabis,” says Hernández.

While there’s been notable political progress towards legalization in Mexico, gendered stereotyping around women who use cannabis is still an issue. You know the kind: Women who blaze are lazy, criminal, and bad mothers. They’re among the unfounded, banal barbs that routinely sting Hernández. But it’s the reason she’s honest about her personal consumption and professional life, even with other parents at her son’s school. "We're very much out of the cannabis closet,” Hernández says, referring to her own family unit. “But believe me that it took a lot of work.”

It takes a lot of mental and emotional bravery to openly discuss aspects of your lifestyle that the media, politics, and a majority of the population habitually demonize. Thankfully, there’s a physical meeting place to facilitate such discourse now.

“The purpose of Chicks vs Stigma was to change the conversation, to be able to normalize the use of cannabis among women, but with a base of education,” Hernández tells MERRY JANE, as she sits on a bench in the store under a bower of plastic ivy intertwined with cheerful lights. “We have to start asking ourselves questions about prohibition and investigate a bit more why this plant is so beneficial. When we have all that information, we can start making decisions about using or not using the drug." [The quotes used in this story are based on three interviews with Hernández: Two originally conducted on my Spanish language radio show Crónica and one in-person chat in the store.]

Her drive to support women in Mexico’s cannabis scene, from the casual consumer to the entrepreneur, began when Hernández began doggedly searching for information on medicinal cannabis to find options for her chronically ill mother. “I didn't even know that strains existed,” she recalls of this early dive into the world of weed. “For me, marijuana was divided into the ‘good’ and the ‘not that good.’ I had no idea what a vast universe it was.”

Although general information is plentiful, finding reliable sources in Spanish is another story. “I thought to myself, ‘I'm going to make a safe, educational space for women without prejudice, where no one looks at you funny for asking about cannabis or drugs,’” Hernández says. “That's how Chicks was born." This post on Chicks’ Instagram feed is the perfect embodiment of the platform’s mission. It’s a multi-slide infographic in Spanish detailing the controversial topic of cannabis and pregnancy. The first image on the carousel decries the frustratingly slim scientific findings on the topic. Later images in the post note that low doses of cannabis can address common discomforts experienced by pregnant people, such as nausea, and counsels how one can speak with a medical professional about cannabis options. 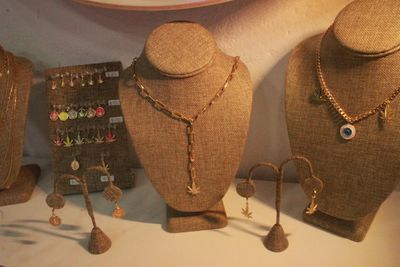 At the time of Chicks’ launch in 2018, Hernández worked for pharmaceutical brands at a marketing firm. She was also physically addicted to Ibuprofen. Headaches ailed her and gastritis discomfort made her days unbearable if she didn’t regularly take the drug. The possibilities she discovered in medical cannabis brought up even more questions, she says. “Why am I selling Ibuprofen when I could be selling cannabis?”

Hernández took the plunge and opened her own business. She focused on making her site a platform for selling cannabis merchandise made by women. Hernández specifically highlighted the types of products that opened her eyes to what weed culture could be if it wasn’t centered around a dude-bro aesthetic. She made infographics and conducted live streaming sessions where she talked about the many uses of cannabis, and debunked harmful misinformation stemming from the prohibition era.

The concept was a hit. Early events, like the 2019 Chicks vs Stigma booth at Mexico’s Expo Weed, and a respective Chicks-run bazaar at CDMX store Gato Gordo, attracted more weed-curious women than Hernández previously believed existed. She continued to meet women entrepreneurs who wanted to sell their goods through the Chicks umbrella brand.

The community’s eagerness led Hernández to begin a moderately tortuous search for a landlord willing to rent to her — a tenant wanting to operate a weed-centric brick-and-mortar. Chicks finally opened on August 14th, 2021, and is now a meeting point for a community of cannabis entrepreneurs that have formed around the brand. For small Mexican weed-related companies, opportunities to sell and educate the public are few and far between. They are seldom found on the shelves of corporate smoke shop chains, like former Mexican president Vincente Fox’s Paradise Smoke Shop franchises.

“It’s exciting that someone is finally bringing women from the cannabis industry a physical space where they can sell their products, build community, and learn hand-in-hand with other women,” says Alejandra Anzures of Sativa, a cannabis lifestyle brand and event platform, to MERRY JANE. “Congratulations to Brenda for opening that space.”

"It's a space for everybody,” says Hernández. “We know — because we've lived it — how difficult it is to get started in an industry that isn't one hundred percent legal yet, and still has so many grey areas that don't allow us to maximize the work that we do. This might sound nerdy,” she continues, “But I want to become a guide in this industry, just like other women have been for me.”

She’s well on her way. Chicks vs Stigma’s pink and green shop sign may well serve as a beacon, one that signals a new era of cannabis culture is here.

MEXICO
GLOBAL CANNABIS
MEXICO LEGALIZATION
GLOBAL CANNABIS REFORM
MORE...
IN THIS STORY
CBD
Click to shop at our CBD store
Caitlin Donohue
FOLLOW
Caitlin Donohue is a Bay Area-raised, Mexico City-based cannabis writer and author of She Represents: 44 Women Who Are Changing Politics and the World. Her weekly show Crónica on Radio Nopal explores Mexican marijuana culture and politics in the prohibition era. Follow Caitlin on IG @byrdwatch.
Share this article with your friends!
AD
By using our site you agree to our use of cookies to deliver a better experience.
Accept
Decline
MORE FROM MERRY JANE