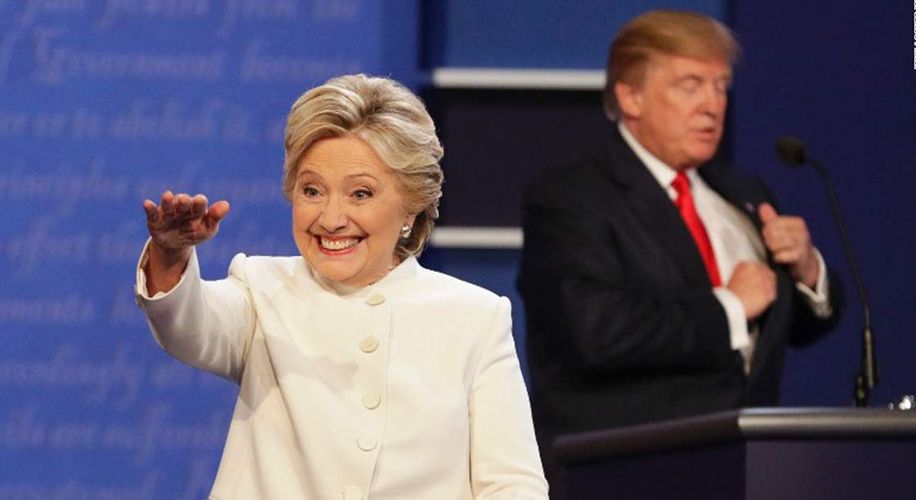 From Trump refusing to accept the results of the election to both candidates calling each other “puppets”, the third debate encapsulated the mess that is the 2016 US election.

From Trump refusing to accept the results of the election to both candidates calling each other “puppets”, the third debate encapsulated the mess that is the 2016 US election.

It seems like only yesterday that the entire country gathered around their television set to tune into the first presidential debate between Donald Trump and Hillary Clinton. Anyone who was looking forward to that initial battle was quickly taken aback by the frightening shit that both candidates (especially the Republican nominee) had to say to the country. Since then, Clinton has sat back in hopes that the Trump campaign would implode, a strategy that seems to have worked quite well thus far.

In the second debate, Trump decided to “take the gloves off” and get personal with his opponent, gleefully bringing up Bill Clinton's past indiscretions and Hillary’s missing emails. Though the consensus of both televised debates was that Trump lost, many have argued that the true loser of the debate is the American people. Manyy went from being excited to see how the two historically unpopular candidates would treat each other at first to rapidly wishing it would all end already.

In the third and final presidential debate, which took place last night in Las Vegas, both candidates managed to display everything that was wrong with this election into a single hour-and-a-half segment. As per usual, any mishaps by Clinton were quickly overshadowed by Trump’s ignorance and narcissism. The Republican nominee made disparaging comments towards Mexicans yet again, this time referring to them as “bad hombres” while discussing his strict immigration policy. He also called his opponent a “such a nasty woman”, which was quickly turned into a Twitter hashtag used by feminist across the country.

But neither of these brash comments were as scary as Trump’s refusal to acknowledge whether he would accept the upcoming election results or not, a move that would certainly divide the country even further. When asked whether he’d accept the final vote as valid, he retorted by stating “I’ll keep you in suspense." None of the remarks from either side have encapsulated this never-ending nightmare of an election quite like when Trump and Hillary bantered back-and-forth calling each other “puppets”.

While the Republican nominee was attacking Clinton for the WikiLeaks discoveries, Clinton quickly pivoted off of the subject of her emails to call Trump a “puppet” of Putin and Russia, in which Trump quickly took the bait and childishly argued that she was the true “puppet”. Clinton focused on attacking Trump for buying “Chinese steel” and dismantling his rigged election stance by claiming that he even thought the Emmys were rigged.

All in all, the third debate was a dismal affair between two candidates that would rather talk about each other than the issues plaguing our country. Moderator Chris Wallace did a quality job at trying to keep the presidential candidates on topic, but the candidates constantly fell back to trying to make the other more unappealing. The cringe-worthy debate had few bright spots, and neither Clinton or Trump really said anything we haven’t heard before. In an election that seems more like a reality show than a race for who will lead the most powerful country in the world, the most comforting part of the third and final presidential debate was the end, signifying that this whole circus will all be over soon.