NEWS
Ohio Truck Drivers Busted for 55 Gallons of CBD Oil, Face Up to 11 Years in Jail
AD
Despite the Farm Bill passing, hemp-derived CBD products are still stuck in a grey area when it comes to law enforcement in certain states.
Published on March 7, 2019

When the 2018 Farm Bill was signed into law late last year, hemp advocates rejoiced. The federal legislation legalized the possession and transport of the industrial-use, low-THC cannabis plant and all of its byproducts, including hemp-derived CBD. For a brief moment, it appeared that the non-psychoactive side of the legalization issue had finally been resolved.

Fast forward a few months, though, and a new police report out of Ohio illustrates that the days of hemp criminalization are far from behind us, with recent CBD busts seeming to mirror prohibition-inspired assaults against THC.

According to a press release from the Ohio Highway Patrol, and first reported by High Times, local authorities arrested the driver and passenger of a U-Haul truck late last week after they discovered 55 gallons of CBD oil in the back of the vehicle. Both men were charged with felonies for possession of a Schedule I substance, and are now facing up to 11 years in prison and up to $20,000 in fines. 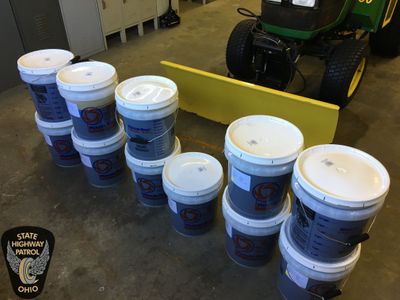 But even with the Farm Bill officially on the books, and hemp regulations eased on a national level, Ohio officials have restricted local CBD business within the state’s long-delayed, and slow-to-start medical marijuana program.

In December of 2018, shortly after the Farm Bill passed, Ohio authorities announced that CBD would still be considered illegal unless purchased through a dispensary licensed by the state’s medical marijuana regulators. All other CBD oils would be considered the same as THC-rich cannabis flower — Schedule I drugs.

“All marijuana products, including CBD oil, can only be dispensed in a licensed Medical Marijuana Control Program dispensary,” the Ohio Board of Pharmacy notice reads, according to High Times. “Those marijuana products will have to comply with the rules and regulations of the program. All products must have a known source, as well as known quantities of active ingredients. Testing procedures will be conducted by testing laboratories licensed by the Ohio Department of Commerce.”

As for the two men driving the U-Haul full of non-psychoactive hemp CBD oils, the impending jail time would be the same if they had been caught transporting, say, heroin.

If the unnecessary incarceration wasn’t enough, a police spokesman even made it a point to note in the press release that “CBD oil is made from strains of cannabis that contain low levels of THC.” Thanks for the info, why don't you rub some more salt on the wounds?

CBD
CRIME
POLICE
PROHIBITION
MORE...
IN THIS STORY
CBD
Click to shop at our CBD store
Zach Harris
FOLLOW
Zach Harris is a writer based in Philadelphia whose work has appeared on Noisey, First We Feast, and Jenkem Magazine. You can find him on Twitter @10000youtubes complaining about NBA referees.
Share this article with your friends!
AD
By using our site you agree to our use of cookies to deliver a better experience.
Accept
Decline
MORE FROM MERRY JANE