NEWS
Follow Up: Non-Violent Cannabis Offender Just Contracted COVID-19 in Prison and Needs Our Help
AD
Michael Thompson’s decades-long incarceration is turning into a death sentence, and the Last Prisoner Project needs our help to save his life.
Published on August 5, 2020

Image via The Last Prisoner Project

This past June, MERRY JANE reported on the case of Michael Thompson, a 69-year-old Michigan inmate busted in 1994 for selling weed to an undercover cop. Even though Michigan has since legalized cannabis, Thompson remains behind bars and is supposed to stay there for the rest of his life. But, jails are the last place anyone deserves to be — especially for a non-violent weed offense — amidst a pandemic, as they are hotbeds for the virus. The Last Prisoner Project has made efforts to get Thompson out of prison. But, due to the United States' inequitable justice system and lack of proper care, we regret to report that Thompson has been hospitalized for COVID-19.

Getting Thompson out of prison took on emergency status earlier this year when coronavirus hit the States. Since then, the virus has torn through incarcerated populations like wildfire. Thompson, who suffers from diabetes and other health issues, was especially vulnerable to infection. Not surprisingly then, he fell prey to the disease.

As of now, if Thompson recovers, he will be sent back to prison. If he’s not sent back to prison, it’ll be because the coronavirus took his life. That's why he needs our help now more than ever — he can't go back to prison. Here’s how you can help. Call the Michigan Parole Board (517) 373-0270 and Governor Whitmer (517) 373-3400 and tell them to grant clemency to Michael Thompson. His MDOC number is: 176309. 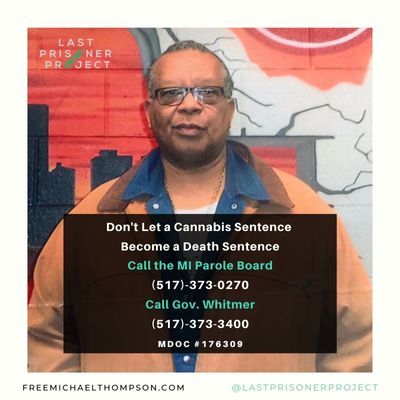 “Before being incarcerated, Michael received a Humanitarian award from NAACP for his work with troubled youth as well as the keys to the city of Flint, Michigan,” Mary Bailey, Managing Director of LPP, told MERRY JANE in an email. “He was an asset to his community.”

According to Bailey, Thompson is in bad shape. “Michael is feeling incredibly weak. He is diabetic and unable to eat the food being served in the hospital. His main source of sustenance right now is milk and juice, which is not enough. He is feeling malnourished. On a phone call earlier today, his voice was barely audible and he was coughing a lot.”

Despite this, Thompson’s case remains in an extremely dangerous state of legal limbo. “Last Prisoner Project and Michael’s attorney sent in his clemency petition on January 29, 2020,” Bailey wrote. “We applied for an expedited review back in March… His case has still not been reviewed by the Michigan Parole Board. Governor Whitmer is unlikely to grant Michael clemency without a statement of support from the parole board. They have told us repeatedly that they would be reviewing his case ‘soon’— but they have not given us any further information.”

What's infuriating is the fact that Roger Stone was spared from going to prison after lying to Congress, while people like Tekashi 6ix 9ine, Michael Cohen, and Paul Manafort are among the prisoners released due to the coronavirus outbreak — all while Michael Thompson's case, and thousands of other non-violent drug offenders, is continuously ignored. How is this true justice?!

The Last Prisoner Project (LPP) has relentlessly worked to commute the sentences of Michael Thompson and other inmates presently locked up for weed crimes in states, such as Michigan, that are no longer even crimes.

“Please help Michael by calling the Parole Board and Governor Whitmer to urge them not to return Michael to prison from the hospital," Bailey said. "He has already served 25 years for only three pounds of cannabis. Don’t let a nonviolent cannabis sentence become a death sentence for Michael Thompson.”

NEWS
WAR ON DRUGS
PRISON
PRISONERS
MORE...
Mike McPadden
FOLLOW
Mike McPadden is the author of "Heavy Metal Movies" and the upcoming "Last American Virgins." He writes about movies, music, and crime in Chicago. Twitter @mcbeardo
Share this article with your friends!
AD
By using our site you agree to our use of cookies to deliver a better experience.
Accept
Decline
MORE FROM MERRY JANE