NEWS
Is the U.S. Market for Weed Edibles Actually Booming?
AD
Despite some setbacks, business is hot, and technological advancements are soaring at supersonic speeds. At least one thing is clear: edibles are here to stay in the legal weed market.
Published on December 21, 2018

This article is excerpted from a cross-border weed trend series MERRY JANE is publishing in partnership with VICE Canada via Sticky. Here, we look at the state of edibles in America's legal weed zones.

While Canada’s adult-use edibles market remains suspended in year-long limbo, several US states will have already sold hundreds of millions of dollars’ worth of chewable, drinkable, slurpable cannabis.

In 2014, Colorado and Washington became the first two states to let anyone 21 years or older buy cannabis-infused edibles. Since then, eight additional states plus D.C. came online, all serving up THC-laden foodstuffs with slightly varying degrees of regulation. And best believe folks are gobbling it up.

According to the cannabis data firm BDS Analytics, edibles are the industry’s fastest growing segment alongside concentrates. Gummies have long led the pack in sales, but chocolate, tincture and pill sales recently spiked along the West Coast. California, the nation’s largest weed market, saw 108 percent growth in edibles sales this year, jumping from $18 million in January to $37.5 million by August (USD).

Another data firm, the Brightfield Group, projects cannabis edibles will rake in $2.3 billion USD by the end of 2018. By 2020, America’s edibles may net $5.3 billion USD, putting the infused foodie sector on par with the K-pop and zombie industries. Or Richard Branson’s net worth. 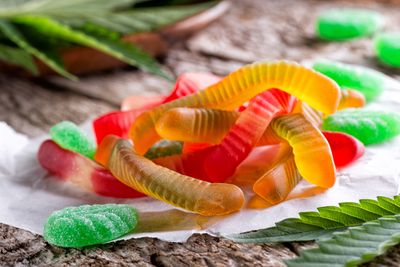 Although cannabis-infused candies, chocolates, wines and teas go back hundreds — if not thousands — of years, today’s edibles are arguably better, stronger — and some can kick in much faster, too. Novel products, like flavorless weed powders or liquid drops, are designed to infuse any dish imaginable, freeing dope diners from the sugary, fatty limitations of confection- or cookie-only options.

Medical marijuana patients in Arizona will be especially spoiled, as the Grand Canyon State will soon host the nation’s first cannabis take-out restaurant. Nevada could be next if its legislature greenlights social consumption spots like cannabis clubs or weedy eateries early next year. 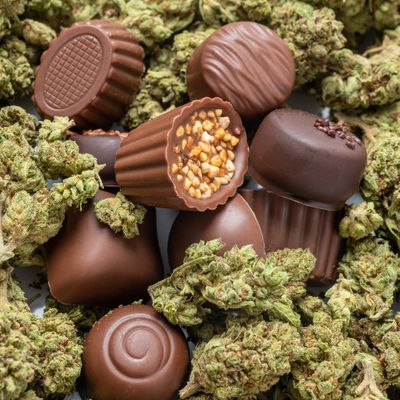 Won't Someone Think About the Children?

Generally, edibles on the recreational markets are limited, by state laws, to 10 mg of THC per serving with a maximum of ten servings per package, or 100 mg THC altogether. The serving is equivalent to smoking a joint or a large pipe or bowl stuffed with weed. Medical edibles can go higher, but usually no higher than 20 to 30 mg THC per serving.

What made these limits happen? A combination of lightweights, novices, bad info, and highly publicized sensationalism.

Shortly after Colorado launched recreational weed sales, emergency rooms observed a sharp rise in the number of children and teens being admitted for overdosing on pot candies. Granted, none of these kids died. But with the figures quadrupling between 2005 to 2014, alarms sounded.

To be fair, it wasn’t just kids. Within the first year of legalization, authorities attributed two adult deaths to cannabis edibles. One death involved a 19-year-old African exchange student jumping (or tripping, depending on the account) from a hotel balcony after eating an entire 65 mg weed cookie. Another involved a suicidal Denver-area man shooting his wife because, as his attorneys argued, he ate too many weed candies at once.

The media didn’t help matters, either. In June 2014, Pulitzer Prize-winning journalist Maureen Dowd penned an op-ed at the New York Times recounting her hellish experience with a Colorado edible: she chased down several bites of a THC-infused chocolate bar with a bottle of wine, flipped out, then blamed the state’s lack of regulations on her lack of foresight. 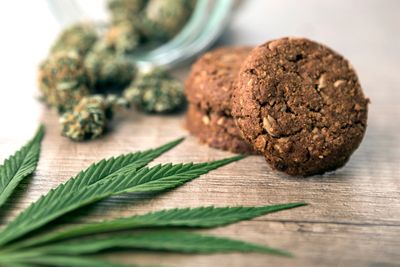 How to Keep a Sky From Falling

Andrew Livingston is the director of economics and research at Vicente-Sederberg, an international pot law firm based in Denver. Livingston helped shape Colorado’s rules for edibles prior to and after legalization, and he told us by phone that regulators tried their best to prevent debacles like Dowd’s. He largely attributed these horror stories to Colorado’s transition from a medical to a recreational market.

When Colorado “went rec,” many former medical marijuana dispensaries converted to recreational licenses. At the time, medical cannabis—including edibles—weren’t as tightly regulated as recreational products are. Converted pot shops could hock their old medical edibles on the adult-use market so long as those edibles contained no more than 100 mg THC per package. Single “servings” were ill-defined at the time, and many medical products were incredibly potent relative to their tiny, bite-sized packages. Imagine trying to split a miniature peanut butter cup into ten equal parts.

“Medical products were designed for medical patients, who have a much greater need for high-THC products,” Livingston said. “But regulators, business owners, and activists realized there needed to be potency limits” for the general public, as tourists and casual users would have much lower tolerances to THC than medical cannabis patients.

Where did the 10 mg cap come from? According to a 2013 report from the Amendment 64 Task Force, the limit was determined by compiling several scientific studies, anecdotal reports, and consultations from medical doctors.

At 10 mg, the average adult will fully feel the positive effects of THC (giggles, munchies) with minimal adverse effects (paranoia, dizziness). The upper limit for this range is 20 mg, but that can be too much for some people, especially rookies. The lower limit is 5 mg, but too little THC carries an additional caution Livingston called “stacking.” Stacking is when someone eats an edible but doesn’t feel anything right away, so they eat more edibles to compensate for the lack of high. Often, these nibblers will underestimate how much THC they’ve ingested and end up tripping balls like Maureen Dowd did in 2014.

The regulatory slap-down didn’t end with just dosing for edibles.

Edible shapes and designs that could appeal to children, like gummy bears, were banned in 2015. Infused foods would also require an edible diamond stamp labeled with bold letters spelling out “THC.” Package labels warned users that the edible products were not for children as well. Some companies implemented child-proof mechanisms that are so tricky to unlock they’re nearly adult-proof as well. By mid-2016, the new regulations went into full effect. So far, they appear to be working.

Other states such as Washington and Oregon soon followed Colorado’s lead. In fact, Oregon took it a step further and capped edible servings at 5 mg THC. This year, Washington state almost banned cannabis gummies altogether but scrapped the ban at the last minute. 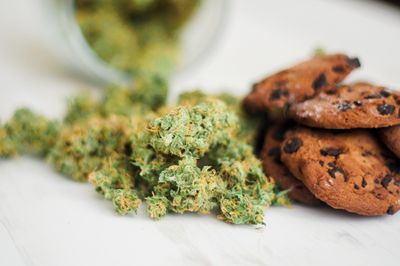 What Does the Future Hold for US Edibles?

Worrying over edibles aside, business is booming, and technological advancements are soaring at supersonic speeds.

For one, cannabis edibles are rarely made with butter, once the key ingredient in infused foods. Bud butter may work wonders in the home kitchen, but it usually creates edibles with inconsistent dosing. One half of a brownie may hold more THC than the other half, which is no good in an industry beholden to stringent lab testing requirements and state regulations.

To craft edibles with homogenous dosing across every batch, the industry switched from butter to hydrocarbon or carbon dioxide extracts. In the concentrates market, these extracts are known as “wax” or “shatter” hashes which can reach up to 90 percent THC by weight. Because the extracts are relatively pure, they can be reliably dosed into single servings.

Furthermore, a new generation of edibles are water-soluble. Earlier versions of infused drinks like sodas, coffees and teas were made with heat-activated kief or hashish, which led to cloudy mixtures and gunky buildups. Newer recipes employ emulsified cannabis powders (THC bonded with starch) or sonication (THC broken up into microscopic particles with sound waves) to dissolve the weed in water, something unheard of just a few years ago.

Water-soluble THC confers a few major benefits over edibles made with oils. Emulsified THC is absorbed through the body’s carbohydrate channels, which are present in the mouth’s mucous lining. Because starch molecules carry the THC, the weed absorbs directly into the bloodstream and bypasses the digestive system. Drinks, drops, sublingual films and powders designed this way will get someone high within five to ten minutes, leagues faster than traditional edibles. Quicker onsets mean less chance of stacking doses and overdoing it.

We may also see edibles marketed for their flavonoid content. Flavonoids are another class of chemicals in cannabis that may be responsible for the different kinds of highs consumers experience.

Regardless, given the rapidly expanding size of the market coupled with the blitzkrieg progress of legalization, it’s safe to say edibles are here to stay. Bon appétit, stoners.

NEWS
EDIBLES
BUSINESS
LEGALIZATION
MORE...
Randy Robinson
FOLLOW
Based in Denver, Randy studied cannabinoid science while getting a degree in molecular biology at the University of Colorado. When not writing about cannabis, science, politics, or LGBT issues, they can be found exploring nature somewhere in the Rocky Mountains. Catch Randy on Twitter and Instagram @randieseljay
Share this article with your friends!
AD
By using our site you agree to our use of cookies to deliver a better experience.
Accept
Decline
MORE FROM MERRY JANE