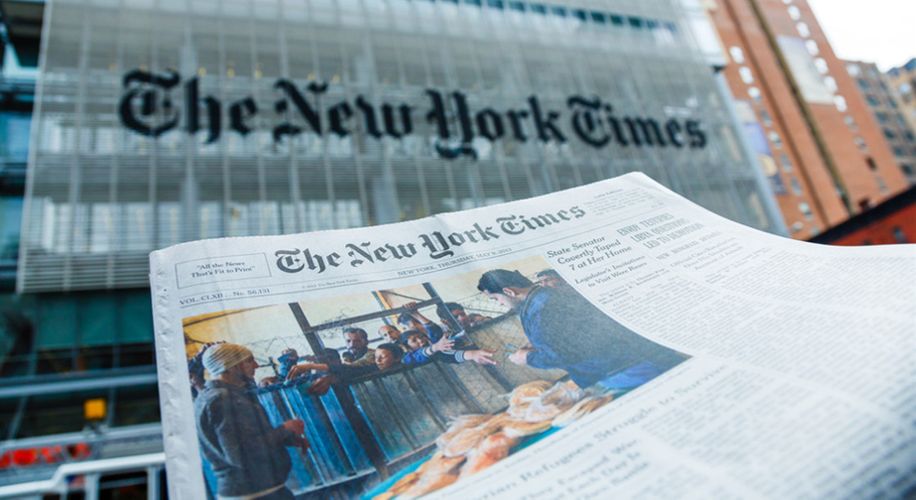 We spoke to medical professionals and pot journalists who think America's newspaper of record has some work to do on weed.

We spoke to medical professionals and pot journalists who think America's newspaper of record has some work to do on weed.

What might have begun as a fringe beat on reserve for High Times readers and writers, cannabis journalism has in recent years quickly blossomed into a global political, scientific, medical, economic, agricultural, and social issue to be taken seriously both by pot people and the mainstream. The ramifications of this $11 billion American industry, projected to double within three years, carry far too much gravitas to be taken or paid attention to any less seriously than other subjects in the news.

A number of medical professionals say cannabis is the solution to the opioid epidemic — and in some cases the only effective alternative to dependence on pain medications — while in other cases cannabis has literally saved lives by alleviating nearly fatal epileptic seizures. To not recognize that cannabis touches every other aspect of society — medicine, criminal justice, culture, Wall Street, and so forth — is to simply be uninformed or behind the times.

While media outlets like (yours truly) MERRY JANE, Leafly, High Times, Freedom Leaf and so forth exist solely for the purpose of covering the cannabis space, mainstream publications have also recognized the need to place reporters specifically on this beat: From local papers like the Denver Post to national magazines like Rolling Stone or Forbes, reporters are vested solely with the responsibility of keeping tabs on weed.

So from the point of view of a cannabis journalist, it is glaringly obvious when a paper covers a topic to which marijuana is so integral, and yet mention of the herb is absent or inconsequential. Unfortunately, that's been the case all too often with our country's paper of record, the New York Times.

Regarding a recent NYT article about medication-assisted therapy for opioid addicts, John Sullivan, cannabis consultant and former chief technology officer at New York-based medical marijuana company Fiorella Pharmaceuticals pointed out that there is not even any mention of cannabis as a tool to treat opioid addiction. "My reaction was one of disappointment. With 64,000 people killed annually by drug overdoses, we can't afford to miss opportunities to educate the public," he says. "The article says the FDA is seeking new medications to treat addiction, yet, in spite of overwhelming anecdotal evidence that cannabis helps addicted people, we can't even get clinical trials launched because of the stigma. This is the news not being reported."

These gaps in mainstream coverage mean physicians may remain clueless on how to alleviate addiction and other suffering, Sullivan says.

"Cannabis is the safest, most powerful tool we have to get people to stop using opioids," says Dr. Adie Poe, co-founder of Habu Health and an instructor on cannabinoid and opioid interactions at Washington University in St. Louis. "The biggest public health impact that cannabis can have in this country would be the alleviation of the opioid crisis. We're so desperate for answers, so to ignore cannabis and keep it out of the conversation is quite irresponsible."

Psychotherapist Celia Behar, a cannabis crusader who's suffered from postpartum depression, says she'd like to see a story in the Times about cannabis and women's health, how the plant can help with PMS, endometriosis, hormonal balancing (via the endocannabinoid system), and so forth. "To me, cannabis in general is such a women's health issue at this point, and women's health is always ignored," she says. With an entire section at the Times dedicated to health, Behar says she hopes to see more coverage around cannabis treatment for both physical and mental ailments plaguing women.

"If the New York Times is going to be the paper of record for the entire country, which it should be, it should cover this seriously and understand it's not a funny stoner thing," says cannabis journalist Amanda Chicago Lewis, who writes a column for Rolling Stone. "It's not ‘haha, people getting high.’ This is the medical revolution of the 21st century; there are a lot of serious things happening that are not being covered and I find that very frustrating."

This isn't all to say that the Times doesn't touch cannabis, because it certainly does. But the tone and depth of cannabis coverage leaves something to be desired. According to a former NYT staffer (current staff would not elaborate), there may not be a cannabis beat per se, as Times reporters often cover various beats at once — disease, pediatrics, women's health, marijuana, opioids, et cetera (though it would also be difficult, they mention, to take inventory of every single reporter and their beat). So the absence of a cannabis-only writer isn't necessarily the problem here.

The issue is that the Times, because it's considered America’s best newspaper, should cover cannabis just as well as (if not better than) any other publication, whether it's MERRY JANE or the Washington Post (where drug reporter Christopher Ingraham happens to be doing a great job on this beat).

"If the paper of record doesn't understand what CBD is in 2018, we are in trouble in terms of holding people in power accountable and having an informed citizenry," Lewis says. Sure, the Times is based in New York, where cannabis policy is far behind that of places like Colorado or California, she points out, but that doesn't mean there still shouldn't be people who can adequately and thoroughly explain to the mainstream what's going on with pot these days.

To keep up with the Times cannabis coverage (or lack thereof), one need not look further than Lewis' Twitter feed:

Anyway, I find this very frustrating. The NYT is the paper of record, and it would be really great if they did a better job covering cannabis.

It's the second biggest crop in the country after corn. Over 90% of Americans support medical use. Over half the states have legalized.

TFW your publication is doing such a terrible job of covering a major major issue that you straight up solicit story ideas from readers 🙄 pic.twitter.com/U4YVh5rEbt

ugh @nytimes for the love of god please hire someone who understands pot -- this description is... just very wrong.https://t.co/cabyzZOpgI pic.twitter.com/t5NM8szhNH

Lewis sent out a tweetstorm following the Times' coverage of Attorney General Jeff Sessions' rescission of the Cole memo: The paper had framed the issue as California versus Sessions, she says, when really governors in other states like Colorado or Oregon had been more outspoken on cannabis than Jerry Brown. "It was false framing," adding that overall, "there are a lot of serious things happening in policy and business and criminal justice that are not being covered.”

Cannabis journalist Mona Zhang, editor of Word on the Tree, has poked her own fun at the Times. "Vaping is a thing, and the New York Times is on it," she wrote in her daily newsletter on January 24:

"In general the New York Times is behind on trends, whether it's cannabis related or not. I don't begrudge them for it, they have a large mainstream audience," says Zhang. "They're not a counterculture publication or an alt-weekly in a cannabis-legal state. I find it funny to read that kind of coverage like the vape pen article, but it gets to be dangerous when they cover more serious topics."

For example, last year the paper published an article on cannabis and pregnancy, and quoted a substance abuse expert advising that if women are treating marijuana as medicine, they should talk to their doctors about it, Zhang recalls. "The Times printed that quote with no context or criticism," she says. In some places, a woman cannot simply tell her doctor she uses cannabis, lest she risk Child Protective Services getting involved or drug testing her in the delivery room.

"I think CPS taking away a newborn child from the mother is much more harmful than the mom using medical marijuana instead of a pharmaceutical drug to treat severe morning sickness," Zhang says. In that kind of example, it's clear reporters need more expertise and background in cannabis to responsibly report on it for a mainstream audience, she says.

Word on the Tree has various subscribers with Business Insider email addresses, but none from the New York Times, Zhang says — although some NYT reporters could be subscribing with their personal email addresses.

"I think having someone who specializes in the cannabis beat or drug policy in general makes a huge difference," says Zhang. "Publications are generally finding that cannabis-related stuff does well, and it's important to have people with expertise writing it out or editing those articles."