NEWS
Cops Face Blowback After Searching Cancer Patient’s Hospital Room for Weed
AD
A video documenting the event has now been viewed more than three quarters of a million times, prompting an apology from the hospital, but no remorse from the heavily chastised cops.
Published on March 11, 2019

When Missouri resident Nolan Sousley went into Citizens Memorial Hospital last week for a regularly scheduled treatment for his stage four pancreatic cancer, he did not expect to go viral. He probably did not expect to have his hospital bed surrounded by police and his belongings turned upside down, either.

In a cell phone video originally posted to Facebook that has now reached national news attention, Bolivar, Missouri police can be seen rifling through the bags in Sousley’s hospital room as they search for — but never find — marijuana.

According to the Washington Post, the cops were called to Sousley’s room by a hospital security guard who said that he smelled weed in the area. In the video, one officer can be heard telling Sousley’s doctor that they are legally allowed to search the patient’s bags without his consent, because they are on private property. When Sousley tells his doctor that he would like to leave the premises, she advises him against it, citing medical concerns.

Sousley was diagnosed with pancreatic cancer last May, and told local reporters that he does not know how long he has to live. In the video, Sousley tells police that he took THC oil pills in the parking lot of the hospital to help with his pain, but that he did not have any marijuana on his person. The police officers on site did not heed Sousley’s pleas, and instead insisted on searching every bag.

“There is no way they could smell it, doc, because I don’t smoke it,” Sousley can be heard telling his doctor. “I don’t ever use a ground-up plant. It’s an oil that I use in a capsule.”

Eventually, Sousley turned over all of his belongings to the officers, including a medicine pouch that he called his “final day” bag, and yet still, no cannabis was ever found.

Missouri voted to legalize medical marijuana in November of 2018, but — as one of the police officers told Sousley in the video — the state has not yet finalized a system for cultivating or distributing legal cannabis, making the plant illegal currently — even for stage four cancer patients. 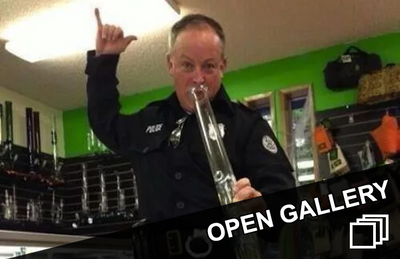 In a statement released by Citizens Memorial Hospital after Sousley’s video went viral, the medical staff apologized for mishandling the situation and allowing the unnecessary harassment of a patient.

“We pride ourselves in providing compassionate care to all patients and we fell short of expectations,” a hospital spokesperson told the Post. “We apologize to our patient and his family and friends who were affected by our actions. We are reviewing the incident and will retrain our employees in the core values and the importance of respect and dignity to our patients and the community.”

In his own follow-up statement, Sousley said that he wanted the situation to be used for good, and that it hopefully influences local politicians to “stop trying to limit our right to use cannabis and its derivatives.” Plus, the events could be used to teach local police that there are consequences for improper action.

“[I hope] CMH and the City of Bolivar will train officers to treat everyone with whom they interact with respect and refrain from treating people as if they all belong in jail, regardless of economic status, race, culture, religion,” Sousley said.

As of press time, the Bolivar Police Department has not yet apologized for the officer’s actions.

NEWS
VIDEO
VIRAL
MEDICAL MARIJUANA
MORE...
Zach Harris
FOLLOW
Zach Harris is a writer based in Philadelphia whose work has appeared on Noisey, First We Feast, and Jenkem Magazine. You can find him on Twitter @10000youtubes complaining about NBA referees.
Share this article with your friends!
AD
By using our site you agree to our use of cookies to deliver a better experience.
Accept
Decline
MORE FROM MERRY JANE