NEWS
Colorado Dispensary Owners Sentenced to Jail for Selling 5000 Pounds of Pot Illegally
AD
The Sweet Leaf dispensary chain was shut down in late 2017, and the saga has now ended with what Colorado officials are calling the first state-led prosecution of a licensed cannabis business.
Published on January 30, 2019

Colorado officials closed the books on the three owners of the Sweet Leaf cannabis dispensary chain late last week, ending a year-long investigation into the practice of “looping,” or selling more marijuana to a single customer than is allowed by state law.

According to the Denver Post, Christian Johnson, Matthew Aiken, and Anthony Sauro were each sentenced to one year of jail time and fined $125,000 after pleading guilty to illegally distributing cannabis and violating the Colorado Organized Crime Act.

Johnson, Aiken, and Sauro, the owners of the 11-location Sweet Leaf chain, admitted to frequently selling customers more than one ounce of weed per day — the maximum allowed under state law. But more than just looking the other way on a few extra ounces, prosecutors say that Sweet Leaf owners, budtenders, and looping customers pushed some 5,000 pounds of pot onto the black market.

“This was a case where it was widespread,” lead prosecutor Kenneth Boyd told the judge, according to the Post. “And the owners knew what was going on and encouraged the practice.”

Denver police were first alerted to Sweet Leaf’s repeat purchases by a concerned citizen, who said they saw the same customers looping every time they went to the dispensary. Local police then began an investigation, making undercover purchases of multiple ounces in single days, and following customers who frequented the Denver pot shop a little too often.

If the prosecutors 2.5 ton estimate is correct, an ounce by ounce breakdown suggests that Sweet Leaf made some 80,000 illicit one-ounce transactions. 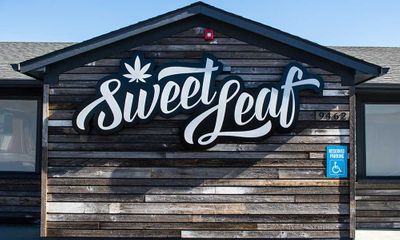 And while federal and state law enforcements have spent significant amounts of money to root out remaining black market producers and sellers in states with cannabis legalization laws, the Sweet Leaf case is the first time that local U.S. prosecutors have gone after bad actors working within state regulations.

“I think this was obviously a first case in Colorado,” lead prosecutor Boyd told the Post. “I think it was the first in the nation where a state prosecution office went after a licensed marijuana company. We did not see this scope with anybody else.”

As for the 13 budtenders and 10 customers who were arrested as part of the looping sting, the retail sales staff was dismissed after serving community service and saddling hefty fines, while the overzealous clients bringing legal weed into the illicit market are still in the early stages of a 160-count grand jury indictment.

To prevent further looping, Colorado’s Medical Enforcement Division rewrote its rules to clarify the one ounce per person per day rule. And outside of official rules and regulations, Denver District Attorney Beth McCann said that the Sweet Leaf case will serve as a warning, and that she is fully prepared to step in if other dispensaries act out of line.

“The vast majority of Denver’s marijuana industry businesses are reputable and responsible and strive to obey our marijuana laws,” DA McCann said in a statement. “However, Sweet Leaf is an exception. My office will prosecute those who do not comply with our marijuana laws.”

NEWS
COLORADO
DISPENSARIES
CRIME
MORE...
Zach Harris
FOLLOW
Zach Harris is a writer based in Philadelphia whose work has appeared on Noisey, First We Feast, and Jenkem Magazine. You can find him on Twitter @10000youtubes complaining about NBA referees.
Share this article with your friends!
AD
By using our site you agree to our use of cookies to deliver a better experience.
Accept
Decline
MORE FROM MERRY JANE