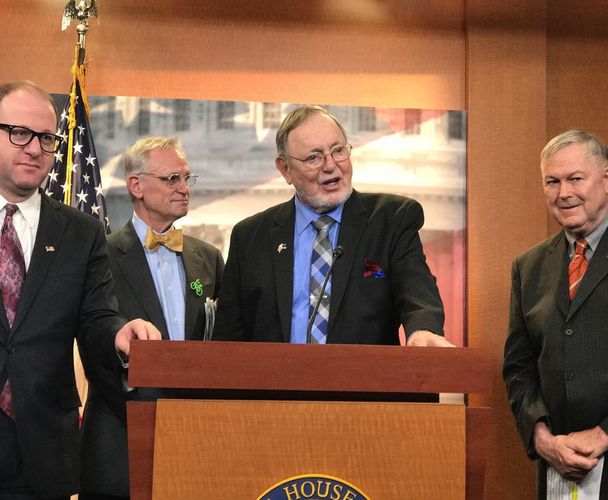 Will Congress finally take the lead on this issue?

Will Congress finally take the lead on this issue?

Although the Trump Administration has all but said it plans to start cracking down on the recreational cannabis trade, members of the Congressional Cannabis Caucus remain certain that their mission will “prevail” against forces at the U.S. Department of Justice.

It was just last week that the four member Cannabis Caucus officially got to work on Capitol Hill, vowing the educate Congress in an effort to push for major pot reforms, up to an including the legalization of marijuana at the national level. However, the assembly of this group has since been shaken by reports from the White House, suggesting that “greater enforcement” is on the horizon with respect to the way Uncle Sam deals with legal marijuana.

The recent comments by President Trump’s press secretary, Sean Spicer, and U.S. Attorney General Jeff Sessions, who said this week, “I’m not sure we’re going to be a better, healthier nation if we have marijuana sold at every corner grocery store,” has given the Caucus reason for concern, but they have not, in any way, deterred them from their goal.

“I never suggest that anybody be complacent, but I am absolutely convinced that this is a battle in which we will prevail,” Representative Earl Blumenauer of Oregon told Decode DC.

In fact, the Cannabis Caucus believes its role in all of this legal marijuana business is now more important than ever. Referencing Spicer’s comments connecting marijuana to the opioid epidemic, Representative Blumenauer said it is now crucial for the coalition to meet with key members of Trump’s administration in order to ensure the attitudes rooted in propaganda and alternative facts do not affect state-level policy.

“It’s clear that Mr. Spicer has not engaged in the research or talked to the industry or people directly involved with direct experience,” Blumenauer said. “This is not something that people have to speculate, there is actual evidence. In Oregon and Colorado (two states with legalized recreational use) there hasn’t been any violent upheaval and public support continues to grow.

Blumenauer also responded to Sessions’ comments this week about marijuana leading to an increase in violent activity.

“There’s no evidence to that effect, and as a practical matter, prohibition has failed to stop people from smoking marijuana,” he said. “There will be 20 million people who smoke marijuana this month and hundreds of thousands of people will be in states where adult use isn’t legal.”

Although it is possible the Trump Administration could soon release a new policy that forces the cannabis industry to close its doors (or never open them) in eight states, Blumenauer believes the situation is not likely to end in total disaster. In fact, the lawmaker said he does not have any reason to believe that Trump or any of his cronies will send in the artillery.

“Most Republicans, regardless of what they feel about cannabis, are strongly oriented towards states’ rights,” he said. “When we have 28 states that have acted on marijuana … and nine jurisdictions that have acted on adult use, that somehow the federal government is going to step in and overturn all of that is unlikely to the extreme.”

There is hope that the uncertainty surrounding the Justice Department’s supposed plot to tear down legal weed may inspire Congress to get serious about passing concrete reforms.

After all, Sessions did say during his confirmation hearing that he would follow any law passed by Congress.

“I think one obvious concern is that the United States Congress made the possession of marijuana in every state and distribution of it an illegal act,” Sessions said. “So if we need to…if that’s something [that] is not desired any longer, Congress should pass a law to change the rule. It is not so much the Attorney General’s job to decide what laws to enforce. We should do our job and enforce laws effectively as we are able.”

In short, while it is easy for the cannabis community to blame President Trump and AG Sessions for being potential saboteurs in this hairy debacle, really, it is Congress that is to blame for failing to put a federal marijuana law on the books when there was a chance of it being supported by former President Obama.

Regardless, if a federal marijuana measure does miraculously make its way through Congress at some point this year, it is doubtful President Trump would grace the bill with his signature.