NEWS
Barack Obama Says He Was Booted from Disneyland in College for Smoking
AD
While campaigning for Democratic congressional candidates in California over the weekend, President Obama told a story about lighting up a “cigarette” on the amusement park’s gondolas.
Published on September 10, 2018

They don’t call it “The Happiest Place on Earth” for nothing.

During a campaign rally in support of seven Democratic congressional candidates in Anaheim, California on Saturday, Barack Obama detailed a previously untold story from his adolescence, telling event goers about the time he was kicked out of Disneyland for lighting up a smoke on the Magic Kingdom’s Skyway gondolas.

Recounting his past experiences at the world renowned theme park, Obama briefly mentioned a childhood trip with his grandmother and sister, before getting to the good stuff. On his next visit, as a college student at Occidental in nearby Pasadena, Obama and friends drove to Disneyland for a Kool & the Gang concert. Hanging around after the show to take in the sights, the 44th President said that he and some chums hopped on park’s famous skyway. By the time the ride was over, Obama said that two Disney cops were waiting to escort him out off of the premises, citing clouds of smoke coming from his gondola.

WATCH: President Obama tells a funny story about being kicked out of Disneyland for smoking cigarettes. The former president was in Anaheim for a rally in support of seven Democratic California congressional candidates competing in GOP-held districts. pic.twitter.com/oqx8Mr57Da
— CBS Los Angeles (@CBSLA) September 8, 2018

As soon as Obama mentioned that he was smoking, an audible cheer emerged from the rally crowd. And with California’s recent embrace of cannabis legalization, and the general vibe of a Kool & the Gang concert, it’s not hard to decipher why the crowd might have assumed that Obama was smoking more than just cigarettes.

Obviously taking the supportive hint, Obama chuckled, raised a finger, visibly winked, and raised his eyebrows before taking a minute to clarify, “Well, no, no, these were cigarettes, people.”

Told at the beginning of Obama’s half-hour speech, the Disneyland tale immediately went viral on social media, with plenty of suspicious stoners making their own assumptions about the truth behind the wafting gondola smoke. 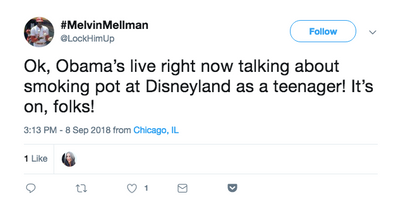 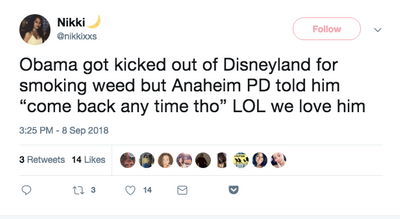 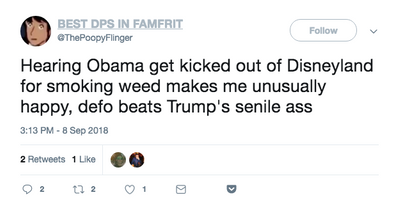 Adding more suspicion to Obama’s claim; while cigarette smoke is currently banned in most populated places and often met with scrunched up faces and exaggerated coughing — especially in health-conscious Southern California — America’s disgust towards tobacco is still a relatively new development.

According to a two decade old report from the Los Angeles Times, cigarette smoking was permitted in all of Disneyland’s public walkways and seating areas until at least 1999, well after a teenage Obama traveled to Anaheim for the Kool & the Gang show in the mid-80s. Now, it is not entirely clear if smoking was banned on particular rides, but because the gondolas sit well above the rest of the amusement park and are open-air encolures, it seems suspicious that Disney authorities would have cared all that much about a simple cigarette.

On the other hand, Obama has already admitted to using cannabis as a young adult, so if the former president was lighting up a joint on the skyway, there seems to be no reason why he would lie now. With no way to know for sure, we may never find out the real details, and will instead have to take the former President at his word.

NEWS
420
POLITICS
CALIFORNIA
MORE...
Zach Harris
FOLLOW
Zach Harris is a writer based in Philadelphia whose work has appeared on Noisey, First We Feast, and Jenkem Magazine. You can find him on Twitter @10000youtubes complaining about NBA referees.
Share this article with your friends!
AD
By using our site you agree to our use of cookies to deliver a better experience.
Accept
Decline
MORE FROM MERRY JANE